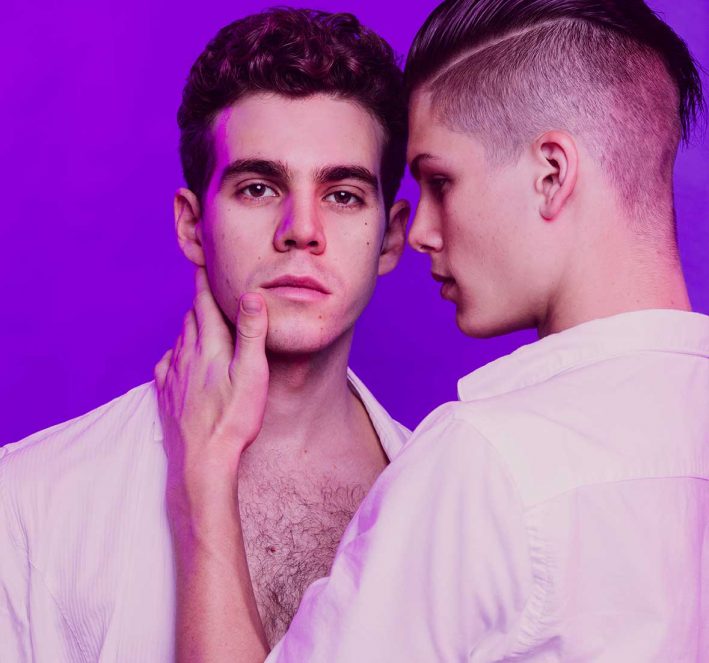 At a prestigious Catholic school, two boys fall in love. In their final school year, Peter and Jason test the limits of their secret relationship, as Peter wants to come out to the world, while Jason, wary of losing his family and friends, wants to live the fantasy a little longer. As rehearsals for the end of year production of Romeo & Juliet go on, tensions flare, as the boys and their classmates fight to reconcile their desires with God’s teachings and their family’s expectations.

By the time the kids head off to a rave (seriously), it becomes clear that there’s something very dated about bare. Though it’s been updated since its 2000 inception (Bare: A Pop Opera becoming bare the musical), there’s still a very early-2000s air about it, with some of the play’s big moments verging on melodrama. Death, hard drugs, teenage pregnancy, fat (though not really) girls who just want to be loved, the restrictions of religion – it’s eye rollingly cliché, feeling more like something these teenagers would have written themselves as a drama exercise (I’m a former high school drama kid and can 100% confirm this is true), than a musical that’s been around for nearly twenty years. Any one of these issues could have been explored wonderfully – and where better to embrace cliché than a musical? – but by lumping them all together and piling problem upon problem, the effect is lessened and characters go underdeveloped. The themes are universal – self-doubt, teenage angst, experimenting with sexuality – but these kids really go through the wringer and by the time the ol’ (sorry, spoiler) Bury Your Gays trope came into play, I was kind of over it.

There is, of course, a need for strong, well crafted LGBTQI representation in media and culture (as someone who spends a lot of time yelling about the lack of excellent female characters in the same areas, I can totally relate), but when it descends into stock characters and overdone set-ups, it doesn’t really benefit anyone. As long as we’re selling outdated ideas of what these kids go through (and as long as people are buying them without question), we’re really just compounding the problem.

And it’s a real shame because bare is packed with incredible talent. Shaun Kohlman’s turn as Peter is simply stunning, shining as the tortured teenager desperate to open up about who he is, but not ready to risk his first love, while Sarah Whalen shines as Nadia, Jason’s acid-tongued sister, taking a clunky fat girl role and turning it into gold. It’s the performances of the young cast that really carry the show, with harmonies to die for, some excellent comedic moments, and a few really powerful solo vocals. Beautifully staged, with a stained glass window backdrop and a clever, if a little obvious, raised cross set piece, it’s inventive and interesting to watch, as every part of the Visy Theatre stage is used.

Story wise, bare disappoints, suffering as it shoves ten pounds of cliché into a two pound bag. But don’t let that put you off, as some of Queensland’s most outstanding young vocalists are on display here, giving performances more than capable of luring you in, and almost making you forget that there’s a rave scene. Almost.

bare the musical is presented by Understudy Productions and will be at Brisbane Powerhouse’s Visy Theatre until June 3rd, as part of MELT 2018.
For tickets and more info, click here.