Laura Sullivan on Finding Notes and Whether She Has Found Yours.

Many of us see random pieces of paper, notes and other paraphernalia on the street without a second thought (unless you’re a sweet soul who takes the effort to put the paper in the bin). Laura Sullivan is different. She’s developed a bit of an instinct to find those sticky notes, cards and other pieces of paper with all kinds of messages.

This instinct has now turned into an exhibition, and over the next few weeks, we will see a flash into people’s lives through these notes at Sun Studios in Sydney’s Alexandra. Laura was kind enough to chat with us about her note loving habit.

This exhibition is fascinating. Can you tell me about the point where you decided you wanted to accumulate all your collected notes into an exhibition?

I started collecting twelve years ago – but it wasn’t collecting, it was just me finding things that interested me like a sticky note on the floor of Woolworths. From then on I just found interesting things and I kept them – I didn’t really collect them. It just happened.

This was twelve years ago before there were social media. I didn’t have Facebook in 2005. It was a personal thing where I kept notes in my lounge room on the shelf.

There were a couple of points where I wanted to make this a ‘thing’. There was a point a couple of years later when I was living in New York for a couple of months and was finding some great notes there. There was this pile on the side of my bed and thought this is a thing I’m doing now! Still, at this stage, this was only personal and I was wanting to make it something that I wanted to look at. I then used to post them on my personal Facebook page.

It wasn’t until a few years ago that a friend of mine said “this is great! Make a book, I’d buy it.” I just thought only real people did that. That was the seed in my head. It made me realise that other people really liked to look at these. They would find them really intriguing whenever I posted one and make little comments and so on.

Was the fact these were anonymous notes make them intriguing?

I think the fact that I don’t know the back stories properly is the awesome thing. I think whenever I find a note of mine, it does not have that same feeling to me. It doesn’t cross the line and not anonymous to me even though someone else may find it intriguing.

So this friend told me to write this book and two years ago I took some time off work. It was here when I decided to do something about it. Looking through them, curating them and start making this book pitch. It was then here when I thought I should also do the exhibition, and now the book is being launched on the night as well.

At that time I pulled them out of plastic sleeve folders and thankfully because of Facebook some of them were timestamped but a few I didn’t know and I had to go off memory to figure out when I picked them up.

What an arduous task!

I went through every single one of them and I realised that this kind of bookmarking would make it a pretty cool exhibition. I had friends telling me also “oh, you need to do something with this too.” This all inspired me to just do it and now I am doing it!

Do you remember your first note that you picked up?

I do! I framed it yesterday which was a real big moment for me. It’s double sided sticky note. It’s a shopping list which I found in a Woolworths in Carlingford. It was a sticky note with things like BBQ Chicken, and notes for dinners of the week. On the other side, there was something more deep and personal. I was wondering how I was here standing, holding this note that reveals something way deeper than just a shopping list.

This was a piece of paper that was on the floor, trolleys were rolling over it. This personal note would have been discarded if I hadn’t picked it up and kept it. I remember thinking that I couldn’t put it in the bin and placed it in my bag. I started thinking: I can’t throw this away myself. It was too personal and too interesting to me.

This thing opened things up. After that, I found some love notes right outside a block a few offices from my work. Another day I walked past Pyrmont Bridge and saw a sticky note that said:

I thought that was weird to see with hundreds of people walking across the bridge at the time.

I then walked towards the end of the bridge, up the steps and I found another sticky note – exact same handwriting – that said:

You would look good on me.

I had a set of notes within minutes of each other but no-one’s noticed them. It made me wonder: What? What’s going on with me? This is weird!

You must have developed a perceptive eye once for collecting these notes you started getting into the swing of collecting notes.

I think at the beginning I don’t think I realised I had developed such a need to collect these notes. I kind of was drawn and instinctively got this eye even after the first note I picked up.

One thing I love about this is the memories though that it generates for me. I can remember exactly where I was standing when I found that “do me slowly” note. It was peak hour and hundreds of people were going home from work. There were throngs of people around and it was great seeing it because it wasn’t a receipt – it was something.

I remember actually standing there, looking up at the sky and laughing, smiling, thinking how am I the one seeing this and not the hundred people walking around me? I started to question how this is happening to me.

Then because I felt weird and strong in that moment it was funnier to find the second one up the stairs. I had that moment of feeling crazy, and now… this second note up the stairs? Walking up to those steps, you couldn’t stop because there were so many people coming down. But I did stop. And I wondered if people would’ve been really annoyed with me stopping there, my bag on the ground. It was all worth it! 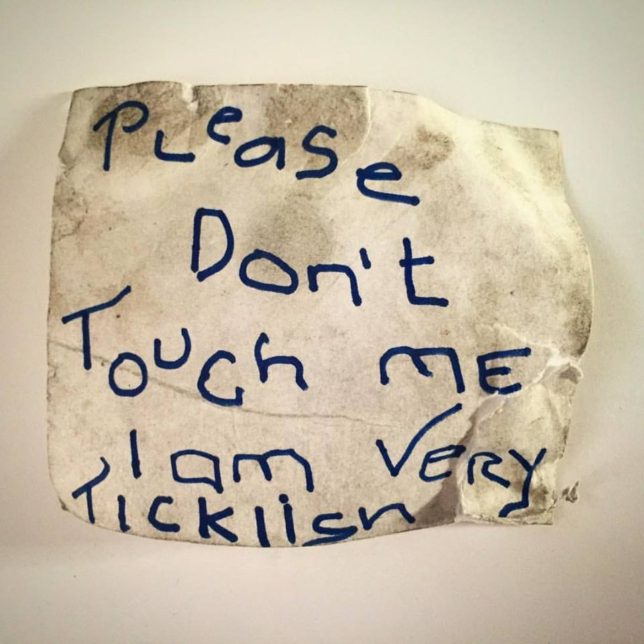 I like how these notes re-invigorated memories in yourself. Certain notes signify parts of your life as well parts of the life of the anonymous writers of these notes. Is this true for you?

For me, just bringing these notes all out has been quite cathartic, therapeutic, something like that. Putting them all together has been interesting. It has been an odd kind of diary of mine. A journal if you want to call it that, of the last twelve years.

It contains notes from all the three countries I’ve lived in. The different states and stuff, every note evokes a memory for me of what went on in a particular moment in my life, how I was feeling and so on.

It’s like that thing when you smell jasmine and it reminds you of a kid or a friend or when you’re young or something along those lines. Every note I have on display has a location and date because I feel the context is important as well as the content. Some of them have more info than others, detailing what was going on in my life and things like that.

Has anyone come to you saying “Hey! That note is mine?”

No, not yet. But it’s the hope one of these days. When I post them I have this tag – #haveifoundyours. It’s on my invites and stuff. For a long time now, I’ve been wanting to connect with people (who write these notes). I am hoping any exposure on my Instagram would mean someone saw it and let me know if their writing is theirs.

The notes that you’ve picked up in all sorts of shapes and sizes, what would you say is the most strangely shaped note you’ve collected?

I’ve found a few aeroplanes. One particularly in Melbourne. On both sides of the aeroplane it said:

You would open it up and flattened out it spelt out:

I’m watching you. Yes, you.

I was all “ahh” but it was a bit funny. I assume it was a kid having fun with people. Let’s hope it was anyway. For the exhibition, I actually want to display it as the actual aeroplane to have fun with the people who come to the exhibition as well.

The anonymity of your exhibition allows for a free-flowing thought process behind these notes. What your exhibition shows are a type of discovery of humans through words which can’t be articulated in a discussion. Putting something on paper is a visceral way to express oneself. Have you found that with these notes, no matter how short they are?

Yeah. There’s a veil that’s taken down further. When I read a note I sometimes wonder if they would say those things out loud.

That’s even another veil that’s been taken down that we are peering into. It’s intended for no-one else. That’s peeking into their life a little bit further, a bit deeper than we normally do face to face.

My absolute favourite one actually was a note that I found on the floor of a subway at Christopher St station – in September 2007, I believe – and it was a smallish notepad page torn out, with a bit of rain on it. Written on it in beautiful script-esque writing with a name and a phone number.

Jealousy – denial of pleasure, denial of happiness.
Satisfaction – aware of other’s resentment.
I often refuse to admit how I’m feeling because it is so painful

It was so deep. It was this amazing poetry. The way they wrote it physically in their own lovely handwriting and how it was so poetic – you can’t write that shit if you tried! It was lying there, getting wet in the rain in a New York subway. It was this beautiful piece of paper too.

Laura Sullivan’s Found By Laura exhibition is on from February 16th until March 5th at Sun Studios, 42 Maddox St, Alexandra, Sydney. For more information check out the Facebook event. Also, check out Found By Laura’s Instagram which features a whole bunch of found notes – are any of yours there? Please let her know.