Laugh it up! Getting to know the Just For Laughs 2011 Sydney lineup… 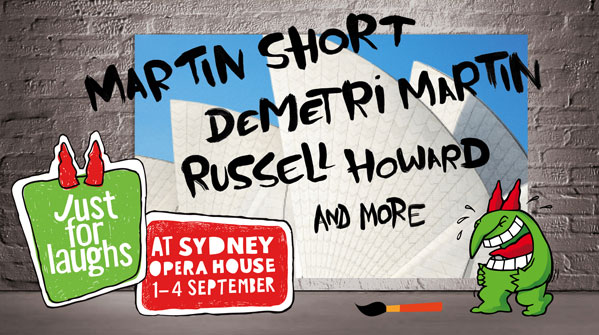 One event we’re quite excited about at the AU review is the upcoming world famous Just for Laughs comedy festival, taking place in Australia this September – for the first time ever at the Sydney Opera House! Over the course of four days, two international comedy galas will take place alongside six solo shows from some of the world’s funniest comedians. Given this is the start of a three year partnership with the venue, I have a feeling this is just a taste of what’s to come in future years!

But boy have they gotten off to a flying start. Headlining the gala evening, and serving as the host for the event is none other than John Cleese of Monty Python fame. The event takes place on the 3rd September and there will be repeat viewings at both 7pm and 9.30pm (Purchase tickets HERE). The event organisers are keeping the rest of the details of the night under wraps, but you can bet that it will feature appearances from some of the six comedians who are taking on the solo shows… and we hope a few surprises too… so who are these fine, hilarious individuals?

Making up the rest of the lineup are:

Now this is the one comedian we’re most excited about. I feel those in Australia are less acquainted with him than they realise, as most wouldn’t have watched Saturday Night Live when it was part of your staple diet in the USA (and featured Martin Short). But from his roles in Three Amigos, Innerspace (one of the most underrated films of all time in my opinion), Mars Attacks!, Father of the Bride, Father of the Bride Part 2 and many more major Hollywood exports, you’ll definitely recognise him. And then there’s his Primetime Glick character…

I also had the honour of attending the closing night performance of The Producers in Los Angeles, where Martin Short performed as Leo Bloom alongside Jason Alexander, and let me say – the man is a genius. One of the best evenings I’ve ever had in a theatre. I am literally jumping out of my skin in anticipation for seeing him at the Opera House!

Tickets can be purchased for his solo show on September 2nd HERE.

Demetri is a young comic who ticks all the right boxes, because you never feel like he’s trying to emulate the comedians who came before him. His dry style of often statistical (yes, that wasn’t a mistype) based comedy is seriously unlike anything I’ve seen. Not everyone will find it funny, but those that do pretty much instantly fall for his unique style of comedy. And if you don’t find it funny then… seriously, you don’t find Demitri Martin funny!? is the sort of response you’re bound to get. From me.

From stand-up beginnings in 2001 on Comedy Central’s Premium Blend to winning the Perrier Award at the Edinburgh Fringe in 2003, Martin was soon snapped up by Conan O’Brian as resident writer for his show. It wasn’t long before long he, too, was hosting his own TV comedy specials.

Demetri jumped to even greater acclaim as a regular contributor to Jon Stewart’s phenomenally successful The Daily Show in 2005. It was there that I first heard of Demetri, while he cemented his reputation as the comedic voice of the next generation – as their Youth Correspondent hosting uber-cool segments like Trendspotting. You know that guy Ryan Shelton who appeared on Rove? Yeah, he was doing a Demitri.

Totally plugged in to the new world of social media, using drawing, music, graphs, charts and Powerpoint on stage, this is new comedy for the 21st Century, with real intelligence, a razor wit and gloriously unexpected punchlines that will leave your head spinning. Oh and, yes he’s that guy from Taking Woodstock also.

Tickets can be purchased for his solo show on September 4th HERE.

Of all the comedians playing, Russell is the only one I’m not familiar with. But he’s HUGE in the UK. Like, play to 240,000 fans in nineteen nights huge. Then there’s Russell Howard’s Good News, of which Russell is the writer and the star. It’s BBC Three’s most successful studio-based entertainment show ever, drawing in 2.5 million viewers a week. So how had I not heard of this guy!? Well, I once asked myself the same thing about Dane Cook… but thankfully I didn’t regret it when I started watching Russell’s stand up shows.

What seems to separate Russell from other comedians is his up-to-the-minute commentary on the world around us. The sort of satirical spin on current affairs that people like Jon Stewart are well known for – except this is definitely meant for the stage, rather than a daily fake news program.

I’ll leave it to our friends at Time Out to tell you their thoughts, because I think it’s clear I’m still learning about the guy! “Probably the best of a new generation of comics. His mind is as sharp as a witch’s nose and gags flow from him with the ease and Majesty of the river Nile”

Tickets can be purchased for Russell’s solo show on September 4th HERE.

Margaret Cho is one funny lady. Multi-talented, multi-cultural and multi-sexual, Cho has become a lesbian icon, and talks about her encounters from both sides of the fence in hilariously explicit detail.

Suggestively straddling the border between stand-up comedy and the pop world, Cho works with rock and roll royalty on some surprising cultural collaborations, including Ben Lee on “Lice”, Ani Di Franco on “Captain Cameltoe” to name but a few.

A darling of the chat show circuit, her appearances on programs like The View have taken her out of the alternative circuit and into lounge-rooms internationally, but live on stage is where you get to see her with the brakes and gloves off, ready to take on the world with raw sexual power, a strap-on and a dirty, dirty mouth.

They even have to write a warning on the Opera House website: This performance may contain explicit themes and content. Damn right it will!

Tickets can be purchased for Margaret’s solo show on September 2nd HERE.

Much like Russell Howard, Louis C.K. has well tapped his home market, but seems to have yet blasted outside his borders. Yet one of his biggest fans is Ricky Gervais, who describes his live act as an unexpected pleasure that cuts against the conventions of stand-up: “There is no image or character, just this extremely articulate world-weary guy who jumps onstage and is bleeding his heart out. It’s state-of-the-art comedy writing and performing – this is a middle-age man in crisis. He does what a comedian should do: air out his worst moments for our pleasure.”

Some may find his humour an acquired taste. But they probably haven’t seen this…

Proof that fart jokes will never die! Tickets can be purchased for Louis’ solo show on September 4th HERE.

BE THERE. Dylan is playing shows on the 1st and the 4th and tickets can be purchased HERE.

Oh and it’s possible that many of the above shows have sold out… we’ve been told tickets are slim in some cases. But if you’re lucky enough to get a ticket, then we’ll see you at the comedy!