Interview: Michael Falzon spills the goss on Evita and why he just wants to work with his mates 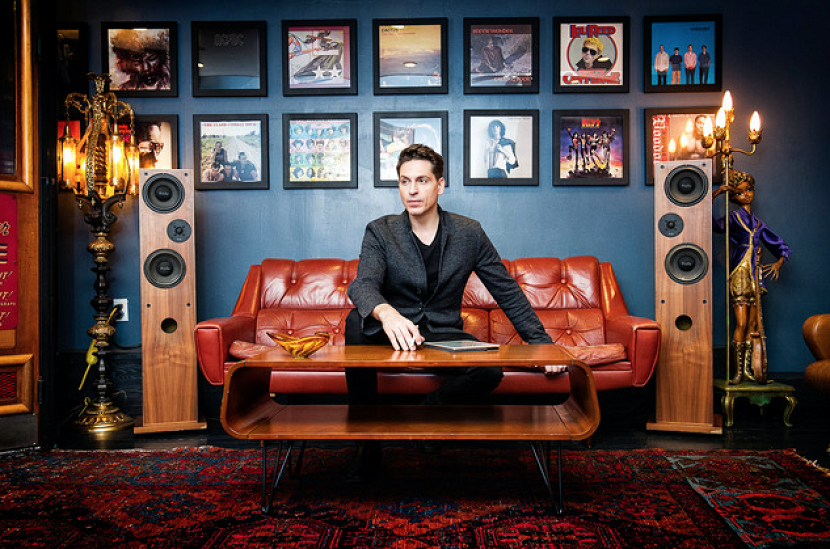 Michael Falzon is one of Australian musical theatre’s favourite leading men. Currently, he is showcasing his considerable talents in Evita, where he shares the stage with the divine Tina Arena. He is also the creator of Swing on This, a collaboration with Ben Mingay, Luke Kennedy, Matt Lee and Rob Mills, with whom he is currently planning a single and tour. I managed to catch Michael for a few questions, all while he was running props around the city for his wife’s short film, in which he is also involved!

It’s wonderful! It’s actually my first time performing in a show like this in the Joan Sutherland Theatre. I certainly don’t take it for granted! It is one of the great venues, not just in Australia but in the world.

I’ve been with international artists who have come to the Opera House to perform and they’re just wide-eyed and in awe of the building and the space. We have some of the best parts of Australia right here in this one place – it can be hard to take that all in! I’ve also noticed a lot of the Evita cast continually posting photos of the House on social media; it’s a venue that you just get that buzz from.

I heard you’re a huge fan of Evita – when did you first connect with it?

I grew up listening to Evita and all of those Andrew Lloyd-Webber and Tim Rice shows. It wasn’t just a case of having them on in the background, it was more of a family event. As a kid I would sit around with the family at night listening to those big double LPs of Jesus Christ Superstar, Evita and Joseph and the Amazing Technicolor Dreamcoat. We’d have the libretto and follow along and listen to the whole show. As a budding singer, these musicals really resonated with me. The music is just stunning. The songs are brilliantly clever – Rice’s lyrics are so wonderful. He has this way of capturing what the character is really thinking in just one or two lines, that just open you up to seeing the character in a completely different way.

Australian audiences are used to seeing you as the hero, the leading man. What appeals to you about a role like Magaldi?

You’re right, he’s not the hero. He’s really just a foil for Eva; her ambition is what connects them. I spent a lot of time trying to wrap my mind around the character, and I really tried to play him more in the way I thought he should be, more of a frustrated star playing in this no-name venue when all he really wants is to be back in Buenos Aires. He’s seriously wondering WTF he is doing there!

This production is very much a marriage of different disciplines – you’ve got this incredible musical theatre ensemble, drawing on some of our best performers, combined with the Opera Australia orchestra and this show which is an opera/musical. It feels really good to be a part of that. I try to watch from the wings most nights, to catch that electricity.

Are there still roles you haven’t had the chance to play that you really want to tackle?

I’m incredibly lucky in that I’ve played a lot of the roles I grew up on: Judas in Jesus Christ Superstar, Galileo in We Will Rock You, Hedwig in Hedwig and the Angry Inch.

I think your tastes change over time. I’d probably say now I’d like to do Guido in Nine. I’d also really love to explore Sondheim in a little more depth. But it’s about balance – some of those roles can really take over your life.

I’m at a point now where I’m more interested in collaborating with certain people than looking for particular roles. I want to work with my mates and with people I really admire.

For example, Swing On This, has been really rewarding because I’m working with my friends in that shared environment which really takes the pressure off. We’ve all been leading men, and when you’re a lead you’re doing the heavy lifting, whereas in the Swing shows we’re all passing the baton. Plus, every show is different; there are different line-ups because one of us will be off doing something else, or different accompanying bands, and, of course, different songs.

Then there’s the one-off concerts, which are a different kind of thrill. Right now I’m working with Kate Ceberano and the TSO (Tasmanian Symphony Orchestra) on The Music of James Bond. You’ve just got the one performance so the energy is completely different. And again, it’s an opportunity to collaborate with extremely talented people who I am also lucky to call friends.

So, you’re producing The Music of Bond show, you’re releasing a single with Swing on This and planning a tour, you’re in Evita and you’re doing a short film with your wife – how on earth do you fit it all in?!

I’m sleeping a little less! Normally I like a good 10 hours! I think it’s a lot easier to multi-task these days; you can do anything with an iPhone!

Do you have a preference for particular projects?

I’m really enjoying producing and making shows – that’s certainly something I want to keep doing. (With Evita) it’s actually been three years since I’ve done someone else’s show and it’s really nice to have that variety, but I think producing and creating new shows will be my focus. It’s a very interesting time to be making theatre and live performance in Australia. The industry feels very vibrant and positive.

Before I let you go, do you have time for a quick Character Assassination of Magaldi?

Can you start by describing him in three words?

Three?! I’ve got 60 floating around in my head! I’d say: duped, endearing and anxious.

What’s your favourite line to deliver as Magaldi and why?

My favourite line is not actually one that I sing. It’s sung by Che, who is a bit like the voice on the shoulder of all the characters. He reflects what’s going on in their subconscious minds.

In ‘Beware the City’, where Magaldi is trying to decide what to do about Eva, Che sings:

“Seems to me there’s no point in resisting

She’s made up her mind you’ve no choice

Why don’t you be the man who discovered her

You’ll never be remembered for your voice.”

It’s a really big moment of shift in that scene, even though it’s a ‘hidden’ thought. It’s another example of just what an amazing lyricist Tim Rice is.

What would be Magaldi’s favourite flavour of ice cream?

If you could give Magaldi one piece of advice, what would it be?

Get out of Junin and get home to Buenos Aires!

And finally, if you saw Magaldi in the street, would you kiss him, kill him or cross the street?

I’d probably cross the street, but really what I’d like to do is give him a hug!