Heart of Mist, the first in new fantasy series The Oremere Chronicles, hits bookshelves later this year. Ahead of the book’s release, AU Reviewer Jodie B. Sloan chatted to author Helen Scheuerer, to get the lowdown on the upcoming series and her new fantasy publishing house Talem Press.

Can you tell us a little about Heart of Mist? No spoilers please!

Sure! Heart of Mist is the first book in a planned fantasy trilogy for young adults, The Oremere Chronicles. It follows the story of 19-year-old Bleak who’s struggling to control her magical abilities in a realm that forbids magic.

When did you first come up with the idea for The Oremere Chronicles? Was it always envisioned as a high fantasy series, or did it develop from more humble origins?

It’s weird, I don’t actually remember having a ‘lightbulb moment’ for Heart of Mist, let alone the whole series, which is how most of my ideas for previous books have come to me. The idea for The Oremere Chronicles was more of a slow burner. At the time I was deep into the structural edit of a standalone literary fiction novel that was giving me a lot of grief. I’d been reading a lot of fantasy series as an escape. So on a bit of a whim with some writing friends, I signed up for NaNoWriMo (National Novel Writing Month) and as soon as I started writing, it was clear to me that this story couldn’t be told in the space of one book.

When it comes to the genre of high fantasy, worldbuilding is key. What was it like creating your own world, with its own history and mythology, for your characters to inhabit?

That’s a great question. To be honest, I find worldbuilding so, so hard. Finer details and lyrical setting descriptions don’t come naturally to me. I’m constantly debating with myself over what details to include and how many. It’s all about finding the balance between painting a picture for your readers while still allowing room for them to use their imaginations.

My first drafts are always quite skeletal – they don’t have the rich detail that you’ll (hopefully!) find in the final novel. I add this in later, layer by layer as I redraft and edit.
And I use lots of visual moodboards and word pools to help me! 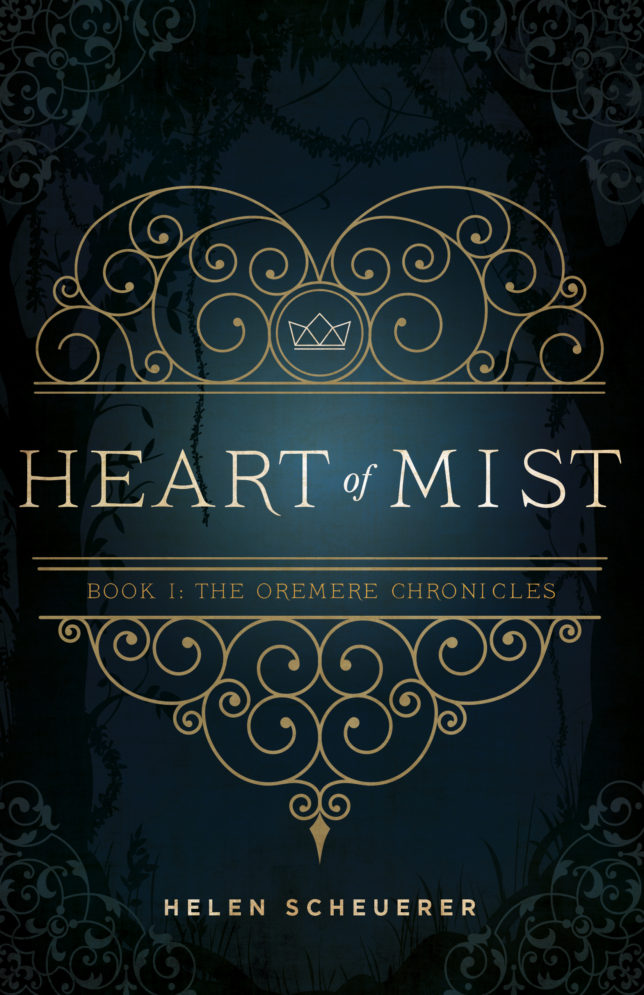 YA, and YA fantasy in particular, is fairly well known for its female characters and Heart of Mist is no exception, populated with a wealth of women, and with two  compelling female leads. Was this a conscious decision? Do you feel that having female characters like Bleak and Henri at the forefront of fantasy novels is important?

I’m incredibly passionate about women’s rights and starting conversations about the universal experiences of women, so it was definitely important to me to include strong female characters. In part, I think Bleak and Henri were a reaction to previously having read a lot of books that centered around men and the male experience, and me being frustrated that this somehow made these books more “serious”.

In literature, I’m constantly searching for someone to relate to, someone to bet on and I found that more and more often, these were the young women in YA fantasy. I wanted to create characters like them – flawed, badass women who could inspire, and start conversations.

YA has shown itself as a genre to be reckoned with in the past few years, with series devoured by age groups well outside what the label suggests. Why do you, personally, think this is? What makes YA fiction so accessible?

I think it’s because a good YA book delves into universal experiences and truths that no matter what age you are, you can relate to. Either you’re in the YA demographic and you’re experiencing things alongside the characters you’re reading about, or you’re an adult who has experienced those things and can remember what they were like.

We’re also in the age of binge-watching and binge-reading, and there are so many epic series out there that are just begging to be devoured. Adults need an escape from the daily grind as much as young adults.

This is your first fantasy novel, but you’ve been offering fellow writers advice for a while over at Writers’ Edit. Given that the site is so focused on helping and inspiring emerging writers, was it a little nerve wracking putting out your own novel? A little like putting all your own advice to the ultimate test, in a way?

I haven’t really thought about it that way (yet!). I feel like no matter what your background is, publishing a book is a nerve wracking process. Like any author I go through stages of self-doubt and then elation – it’s a rollercoaster that’s for sure.

I don’t see it so much as testing our advice, but rather testing myself – my resilience, my determination. While complementary, Writer’s Edit and my career as an author have always been very separate to me.

The support from the rest of the Writer’s Edit team must have been great. Did they help spur you along during the process?

Absolutely. Myself and two of the WE editors (Kyra Thomsen and Claire Bradshaw) all signed up for NaNoWriMo together. We were all working on big projects and checked in with each other daily to see how we were progressing. It was such a fantastic way to pump out that first draft. Later down the track, they were also a part of my beta reader team. Feedback from them and my other beta readers really helped sculpt the book into something I’m proud of.

With Writer’s Edit, you recently launched Talem Press, a fantasy focused publishing imprint. Can you tell us a little about the publishing company and its goals and aims?

Through Writer’s Edit we’d already started a small press (Writer’s Edit Press) which had published three creative writing anthologies, Kindling. I’d always wanted to move on to novels, but was very determined to focus on a specific genre. Given that myself and most of the WE team were working on and reading fantasy novels, it was quite a natural step to opt for that genre.

Talem is the latin word for ‘empower’ and that’s exactly what Talem Press’ books seek to do: empower their readers, young women in particular. Talem Press will be publishing all three books in The Oremere Chronicles (Heart of Mist 2017, with the next two books to follow in 2018 and 2019), as well as a number of other fantasy books.

What’s next for you? Other than more on the Oremere Chronicles, of course!

Well, besides working on Book II of The Oremere Chronicles (which I really need to get a move on with!), there’s actually a whole lot going on behind-the-scenes at Writer’s Edit.

We’re in the final stages of putting together our first ever course for freelance writers. It’s a super extensive online course that guides new writers through the different aspects and challenges of self-employed as a freelance writer. We’re putting the finishing touches on the finer details, with plans to launch within the next few months.

Heart of Mist by Helen Scheuerer is the first book in YA high fantasy series The Oremere Chronicles. Keep an eye out for The AU Review’s review of the novel ahead of its release on August 31st! But if you can’t wait that long, you can check out two free prequel stories right now! Visit helenscheuerer.com to start reading!

Tags: Heart of Mist, Helen Scheuerer, The Oremere Chronicles, YA, YA fantasy, YA fiction