Mix Reuben Kaye with a 10:15pm timeslot and you’re bound to get scandalous late night debauchery, filthy fun and plenty of laughs. The Kaye Hole at the Rechabite, as part of Perth’s Fringe World Festival, didn’t disappoint.

The Kaye Hole is Reuben’s variety show (separate to his earlier solo show), supported by his band, featuring a stand-up comedian, three gravity defying aerialists, a singer, a near-gothic Boylesque stripper, and a fire twirler/breather.

He’s at his subversive and raucous best throughout, albeit repeating some of his solo show jokes, but maintaining his wonderful spontaneous wit, usually at the front row’s expense.

But Kaye holds it all together as your MC/host for the night, adorned in the most risqué see-through black outfit, exposing his every inch to the eye, except anything overly inappropriate (aka, the junk!). 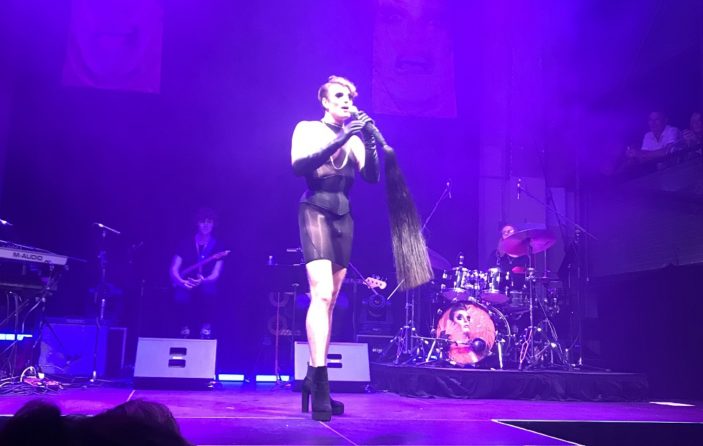 Attending or hosting a variety show at 10:15pm on a Friday night tends to lower the inhibitions from both sides, thus fueling Kaye’s debauchery beyond the norm, if that’s possible, flaunting his near-naked body among guests at whim, with less of the unease of a weeknight show.

He’s still very provocative, linking together the talented acts, whom all impressed but none more than the final rope aerialist act, Emily Chilvers, who scaled up an down a suspended rope without fault or apparent effort.

Lacking the burlesque style, comedian Simone Springer felt the most out of place, but that’s the nature of a variety show and it didn’t prevent the audience from laughing away all set as she talked about her divorce, while fire breather Hana Priest offered something different to finish off, including warmth for the front few rows.

As always, Kaye was the star of the show, with his outrageously messy and camp antics cutting through for the fueled-up and liberal Friday night crowd.