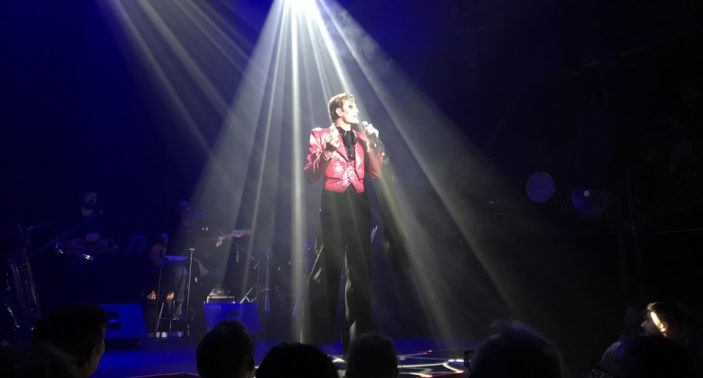 Charismatic, bedazzling, intelligent, salacious and unbelievably natural on stage. Reuben Kaye’s self-titled cabaret drag solo show has it all. Humour, theatre and brute/obscene honesty as well as an entrancing level of crowd interaction.

Described as “the evil love child of Liza Minnelli and Jim Carrey”, Kaye is one of the headline acts at this month’s Fringe Festival in Perth, where he’s familiar with audiences from his hosting role of the popular Club Swizzle.

The Rechabite was near full to its two higher tiers, labelled by Kaye as “cattle carriers on a livestock ship”, with Kaye sarcastically greeting the VIPs up front and admonishing the less wealthy patrons in the general admission.

There was a palpable level of anticipation amongst the crowd when we arrived on the Sunday night prior to the Australia Day holiday, with Kaye’s unmissable pre-show presence, aided by his heeled boots and willing and welcoming small talk, adding to the excitement.

Anyone who wasn’t sure what they were getting themselves into, would’ve known instantly as Kaye worked the crowd before launching into the show. The punchy lines and audience jabs were constant along with some COVID-unsafe drink spitting and sweat flicking, barely offering you a chance to catch your breath after the previous laugh. One young man in the front row was called a ‘foetus’ for his youthfulness by Kaye.

Adorned in a scarlet waistcoat, unmissable fake lashes and with towering height and a mic with a horse tail on it, Kaye opened in song, before sardonically listing the reasons why we deserved 2020 with wit.

While the jokes kept coming, Kaye shared his life story, from childhood to being an adult, including being bullied as a different child at school, coming out to his parents and losing his father. There were countless laugh out loud moments but also moments of genuine insight and vulnerability.

That’s a tough mix to execute, but Kaye’s ability to control any tension in the room is simply outstanding, jumping from humour to song to candid story-telling effortlessly. He had the crowd in the palm of his hand, even if he spent parts of the show on their laps, keeping anyone in the front row or an aisle on their toes.

Kaye’s candidness and wittiness, calling out a mistimed and cackled laugh by asking “did you just shit out a toucan?” are a huge part of the show. But musically he has a huge voice, bellowing out The Cure’s “Boys Don’t Cry” and Geri Halliwell’s “Scream If You Want To Go Faster” while he danced on what he called a ‘giant ecstasy pill’.

This is outstanding entrancing cabaret, delivered with humour, debauchery and intelligence. Kaye is the master of his art.

Fringe World Perth runs until February 14th. You can catch Reuben Kaye at two shows through to the festival’s close:

The reviewer attended the performance on Sunday 25th January.