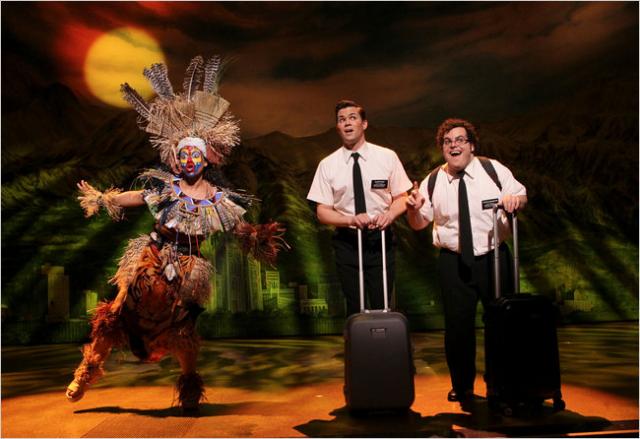 Today we were hit with the amazing news that we’ve been waiting years for. After what felt like an eternity of negotations and rumours, hit Broadway musical The Book of Mormon – brought to us by the creators of South Park – will finally be hitting the stage in Australia. Melbourne will do the honours of hosting the first dates, with the Princess Theatre seeing songs like “Spooky Mormon Hell Dream” and “Tomorrow Is a Latter Day” performed in its walls from January 2017. I had the chance to head to New York last year to check out the show for myself, and here’s a bit of a taste of what we’re in for (and why you should be excited about it all!):

It’s been the hottest ticket on Broadway for four years.

Having launched into Broadway’s Eugene O’Neill Theatre almost four years ago to the day, the show has remained a daily sell out. To get tickets, you need to book months in advance, or show up for the daily ticket lottery which happens out the front of the theatre, giving you the chance to purchase front row tickets at a reduced price ($25 from memory, though that information might be out of date). Shows rarely last for four years on Broadway, let alone remain sell outs through their entire run. When people call this the hottest ticket on Broadway, they’re not exaggerating. And if the city filled with the world’s harshest critics (Birdman flashbacks anyone?) will embrace the show, you know Melbourne is in for a treat… and having seen it myself, I can safely say that the six year long wait (by the time it hits the stage) will be well worth it.

The “cameo” at the beginning…

Fans of South Park will enjoy the moment at the start of the show that would best be described as a “Cameo”. We won’t spoil it and tell you what it is, but it will get you laughing from the moment the first characters arrive onto the stage. Matt Stone and Trey Parker know that there will be plenty in the crowd who are familiar with their work, and they play off of this through the show – though it’s by no means a requirement of viewing.

Not a fan of musicals? This one is for you…

As much as The Book of Mormon is a pretty damn solid musical by its own merits, like many comedic musicals before it (see Spamalot and The Producers), it’s as designed for non-musical theatre goers as it is the people who frequent it. The show, both in its dialogue and design, pays homage to (and, in doing so, makes fun of) shows like Wicked and The Lion King, and has a lot of fun with the nature of the musical. Much in the same way that the South Park creators did with Bigger, Longer and Uncut. If you were a fan of that film and its music, then you’ll love this show.

One of the songs is essentially called “Fuck You God”

By translation, one of the songs in the show is called “Fuck You God”, and contains the lyrics, “When God fucks you in the butt… Fuck God right back in his cunt”. Yes, this show is not for the easily offended. But at the same time, everything is done with an ounce of theatrical grace. They are able to get away with a lot in the show because, ultimately, the message is a fairly positive one. We won’t spoil that for you though…

…and really isn’t that all that matters? Book of Mormon is crammed full of witty dialogue and ingenious stage direction, which the creators of South Park devised with the collaborative hand of Robert Lopez, who was behind another hilarious production, Avenue Q. It’s funny, the music is fantastic and all in all, it’s everything you could possibly want from a Broadway musical. Unless of course you’re one of those extreme Mormons with ten wives who takes it all super seriously, or you hate swearing, or you have some weird phobia against people who wear white shirts. Or you were voted in your yearbook as the “Person Least Likely To Smile”. Then maybe this isn’t for you. But for the rest of us… see you in 19 months!

Larry Heath travelled to New York City to see The Book of Mormon at his own expense. The Book of Mormon opens at the Princess Theatre in Melbourne in January 2017, with potential plans to head to Sydney after what we anticipate will be a lengthy run. For more details and to join the official waitlist, head to: http://www.bookofmormonmusical.com.au/