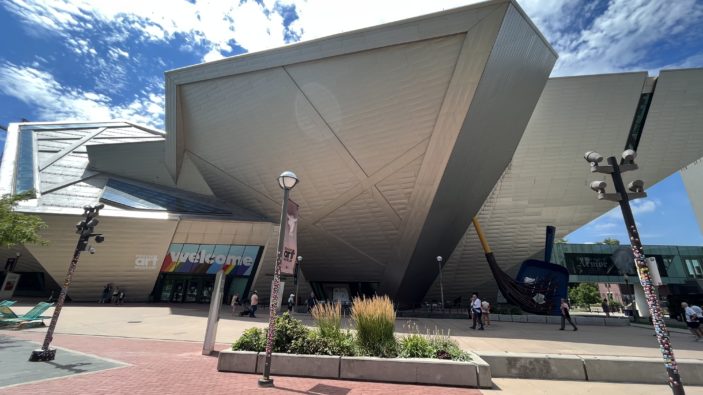 As we led into 2020, we were excited about a number of museums and attractions opening around the world. Of course, due to the pandemic, many saw delays, and others still haven’t opened to this day. And many that did missed out on much of the fanfare you might have otherwise expected, due to a lack of tourists making their way to the region.

So now that borders have re-opened, I’ve spent the last few months hunting down the best new museums in the USA that have opened since the start of the pandemic, to see what we might have missed while we were locked in our homes.

While most were completely new builds, we’re going to start off in Denver, where last year, the city’s preeminent “Art Museum”, which dates back to 1893, enjoyed the opening of a $150 renovation which had been in the works since 2016. 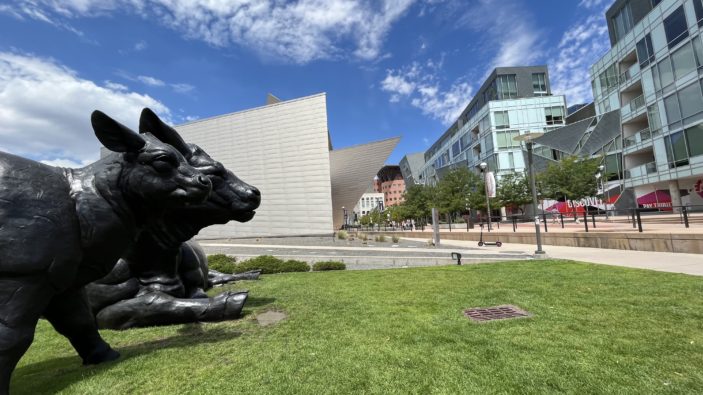 In my recent visit to Denver, I was blown away by the extent of works you’ll find in the Denver Art Museum, located right near Civic Center Park. It feels like the entire history of art is well represented here, in a way that few museums could claim to offer. What The Met is to New York, or the Louvre is to France, the Denver Art Museum is to Colorado. It’s without question one of the best in the US – if not the world.

The diversity of the museum is rarely matched, with everything from temporary exhibitions like a Georgia O’Keefe photo exhibition to “The Art of Armor”, and an exhibition on female photographers.

The gallery is absolutely packed over two buildings. There’s the incredible Frederic C. Hamilton building, seen above, which was Daniel Libeskind’s first completed building in the United States (opening in 2006), and the Lanny & Sharon Martin Building, designed by Italian architect Gio Ponti – his only completed building in the US. The two buildings are connected by a bridge on the 2nd floor through the brand new Sie Welcome Center, or you can access from Main Street.

The permanent collection contains outstanding contemporary and classical art, including Van Gogh, Monet and Manet (to name but a few). There are collections of Hindu, Islamic, Asian and Indigenous art. And you’ll find lots of outdoor art, on the balconies, roofs (head to the 7th floor rooftop of the Martin Building for a stunning view of the surrounds) and around the buildings.

So what was new for the 2021 re-opening? Firstly, there’s the new Sie Welcome Center, which connects both buildings. Here you’ll find a new restaurant, The Ponti, created in collaboration with James Beard Award winner and celebrated Denver chef Jennifer Jasinsk. The beautifully designed restaurant serves a broad range of lunch options, on comfortable chairs, with everything from a PERFECT blended burger with mushrooms on a brioche bun, to crispy rice crusted French toast.

All seven floors of the Martin Building were completely re-imagined, adding over 30,000 additional square feet of exhibition space to the museum. It would take an entire article to detail all the new inclusions, so if you’re interested you can read more about that HERE.

You could easily spend the whole day here, which makes it incredible value for $13 for locals, and $18 for out of towners; with free entry for 18 years and under, and additional discounts for College students. For more details about the museum, head to their official website. 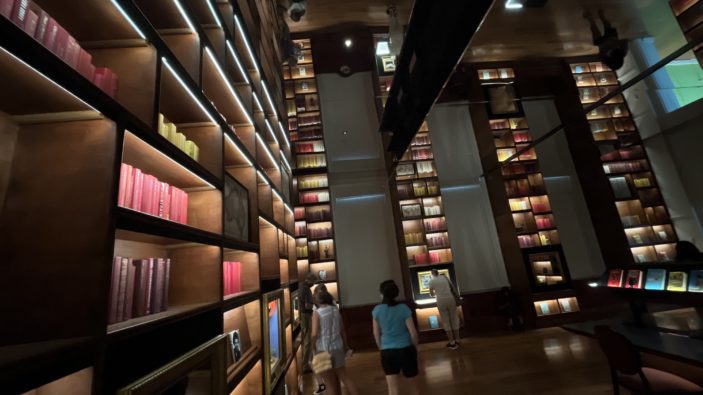 Dubbed a “language arts museum”, Planet Word in Washington D.C. is unlike any museum you’ve ever experienced. Located on Franklin Square in the Franklin School building, which was built in 1869, this is a one of a kind museum “where language comes to life”. And they take this quite literally. For instance, in the library room, pictured above, there is specially designed projection technology that will bring a book in the room to life. I’ll let you experience what that means.

There are endless interactive exhibits in the space, from a globe that fills up a room and teaches you a variety of languages, to a motion-detecting tree, created by Rafael Lozano-Hemmer, that whispers to arriving guests in hundreds of languages. Even the bathroom walls are covered in poetry. Everything is designed to give you the opportunity to sign, speak, manipulate or interact with the different aspects of spoken and/or signed language that are explored. This also includes an exhibit on the history of language in advertising.

There’s also a fantastic restaurant in its basement, Immigrant Food +, which offer a wide range of dishes from around the world, as well as cocktails inspired by different countries. You might find a standard, like the Singapore Sling, or a handmade concoction like “The Power Of One”, an Australian cocktail inspired by author Bruce Courtenay. Yes, literature even finds its way down here.

For those wondering, the Courtenay cocktail is a fruity, smooth milk punch with gin, milk, apricot liqueur, lemon, dried apricot, orange. They also offer 6 types of negronis and a negroni flight with 3 of them. I tried the “Asia” Siddhartha with shochu, honey, fresh lime, muddled Thai basil, cucumber and jalapeño. It was delicious, and served as a lovely end to my time in the museum.

For more about Planet Word, which like most museums in DC, is FREE for General Admission, head to their official website. 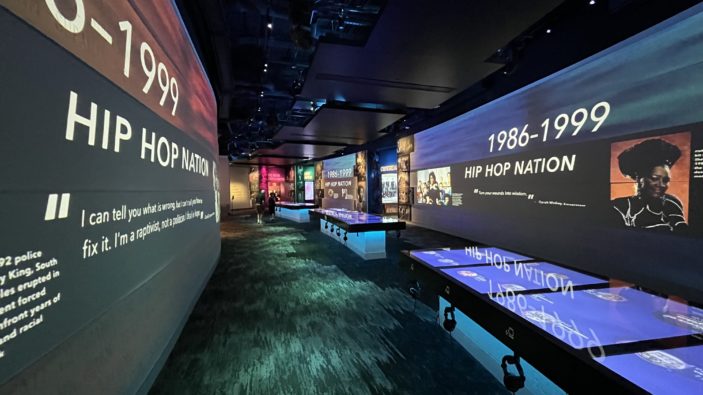 I write this piece just days after visiting this museum in Nashville, and it has left a lasting impression. The museum sits as a space – in the heart of Nashville’s entertainment strip on Broadway – to accentuate the influence of African American music on the entire history of music; creating entire genres and movements that echoed around the world.

A film at the start, called Roots, does a fantastic job of providing the context for what the detailed museum will go on to show. The film is worth the price of admission alone, as I’ve never seen this side of music history explained so well, and so succinctly. Blues musician Bobby Rush and Stax Record’s Al Bell (who was honoured with a lifetime achievement award earlier this month at the Americana Music Awards) are amongst the living legends who take part in the film.

As far as what you’ll see in the space, there is some great memorabilia – but you’re not going to be coming here to see a particular item. The curators of this space have masterfully told the story of African American music through film, interactive displays, projections and indeed, memorabilia of the era. You can also pay an extra dollar to get a wristband that will let you leave with a playlist of music you’ve found and created in the interactive elements of this journey.

Some aspects of the exhibits change, like the room you come into (pictured above), which started playing the Prince Super Bowl halftime show as an immersive exhibit, and later, James Brown live on the TAMI show from the 60s. Interactive exhibitions that let you sing with a gospel choir, dance, be an MC and become a producer. You’ll also find a special George Clinton art exhibition, Boundless: The Manifestation of Self Expression, which runs to November 30th, 2022. 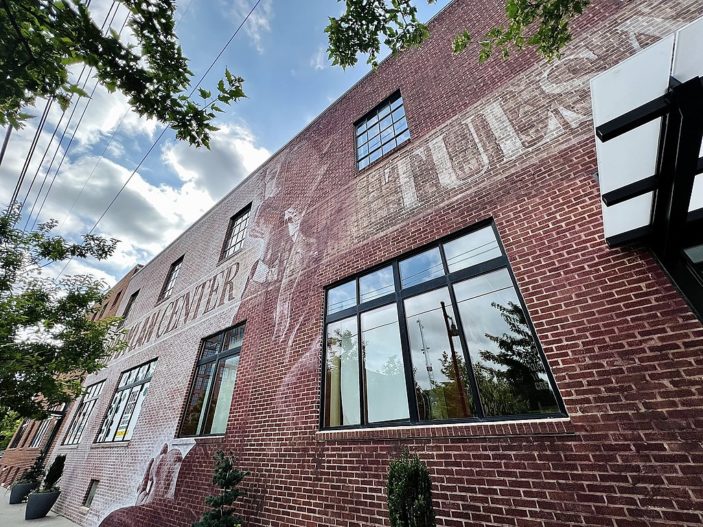 The ever growing Tulsa Arts District, where you’ll also find the Woody Guthrie Center, is now home to the Bob Dylan Center, which opened earlier this year. Designed into a former paper warehouse by Olso Kundig, the Center was founded after Dylan sold his archives (containing some 100,000 artefacts) to the University of Tulsa and the George Kaiser Family Foundation – based in the same city.

Variety has already called the 29,000 square foot building “the GOAT of all rock museums“, and the collection includes “handwritten lyric manuscripts to some of the world’s most treasured songs, previously unreleased recordings, never-before-seen film performances, rare and unseen photographs, visual art and other priceless items spanning Bob Dylan’s unparalleled seven decades as one of the world’s most important cultural figures.”

Look out for the electronic jukebox that’s been curated by Elvis Costello, featuring more than 125 songs from the iconic artist, and a 15-foot ironworks sculpture, which he built himself for the entryway (standing next to an equally tall photo of a young Dylan).

For more details about the museum, head to the official website. 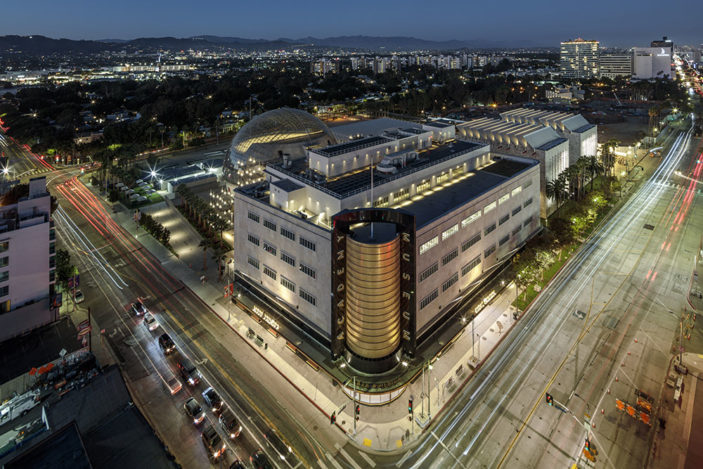 And finally, we have a museum we’ve talked about a bit on this website (including the article mentioned at the top of the article), the Academy Museum of Motion Pictures.

When it opened its doors in September 2021, it finally brought a dedicated film museum to Hollywood. It’s quite bewildering to think that the place that is arguably the centre of the world’s entertainment didn’t have one until now. Even Melbourne has had the brilliant ACMI since 2002.

Like ACMI, and other museums of its kind, the museum sits with a mix of rotating, permanent and visiting exhibitions. As we publish this article, two visiting exhibitions closed over the weekend – The Art of Moviemaking: The Wizard of Oz and Director’s Inspiration: Spike Lee – the former of which showed off the iconic ruby red slippers, and the latter which showcased memorabilia from Spike Lee’s personal collection.

Come November 3rd, these rooms will see The Art of Moviemaking: The Godfather and Director’s Inspiration: Agnes Varda open in their place.

Elsewhere, you’ll find a specially devised audio experience from Academy Award winning composer Hildur Guðnadóttir (Joker), an immersive, multichannel media installation designed by Pedro Almodóvar, and even the original E.T., C3PO and R2D2 costumes, and Citizen Kane‘s “rosebud”. You can also hold your very own Oscar as part of “The Oscars® Experience”, which is available for an additional fee, as I did!

Sitting adjacent and attached to the museum is the architectural splendour, 1000-seat David Geffen Theater, which hosts regular events and film screenings. To see what’s playing when you’re in town, head HERE.

The outstanding museum is open Sunday to Thursday: 10am–6pm, and Friday to Saturday: 10am–8pm. And you don’t need to go all the way to Hollywood to experience some of the content they have on offer. Head to their website for tickets to the museum, details on upcoming special events, and a lot more exclusive digital content.