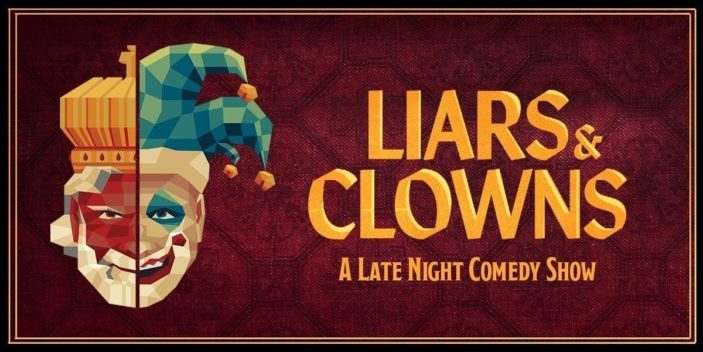 The Producer’s Hotel has had a chequered life but is currently undergoing renovation and is starting to regain some of her former glory. The main room has larger events but upstairs is where the comedy lives.

It is in one of the upstairs former bedrooms that Liars and Clowns, A Late Night Comedy Show is held. The room is slightly claustrophobic, with thirty chairs squeezed into three rows leaving a scant metre for the performers.

Emcee Kyle Dolan is personable, friendly and has some good Christopher Walken jokes up his sleeve. He introduces five different acts, which vary from the published line-up due to reasons…

Each comedian has approximately 10 minutes to tell a gag or two, a funny story or maybe an impression even. Jokes about growing up in hippy communes, posing naked for art class and dumping girlfriends over text during a pandemic all get good reception from the mostly young crowd.

Some comedians had just finished main sets, some were about to go to one, some were just friends of other comedians and had a go. Ange Lavoipierre had 99 problems – but we don’t hear them all at this show (obviously). Oliver Coleman has an extended run at the Rhino Room. Blake Everett has complete and utter mayhem at Gluttony.

As they say in the movies, Liars and Clowns is a bit like a box of chocolates. You never quite know what you’re going to get. As a taster for finding shows to see, only a couple of performers had promised flyers at the end of the show. A complete show in itself, Liars and Clowns is also an easy way to get an introduction to a number of artists. Maybe.