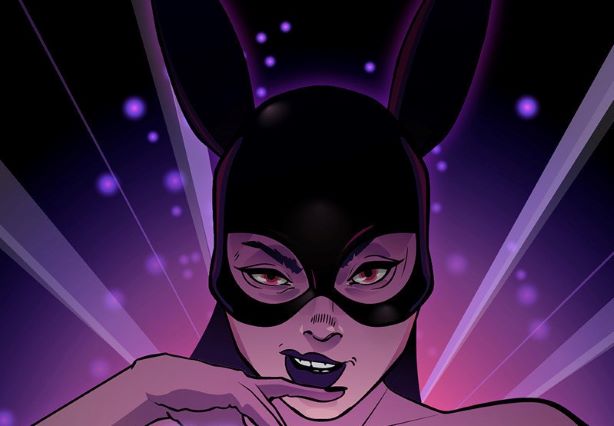 The Strut and Fret Production Company have had a very successful relationship with the Adelaide Fringe over the years. Popular shows such as Limbo and Blanc de Blanc have had sell-out seasons. Their latest offering, The Purple Rabbit is easily set to follow this trend.

The show is set at the Roundhouse, in the Garden of Unearthly Delights. As the crowd squeeze into the tent, the excitement in the air is palpable. Everyone is expecting a great show, and no one is disappointed.

The opening number has lights flashing onto each of the five performers in turn, allowing glimpses of their personalities to show. There’s a magician, dancer, beatboxer, acrobat, agony aunt … the combined talents ready to entertain for the next 70 minutes.

The opening magic act starts with a glass of beer from an empty paper bag. This soon escalates as more beers somehow appear from nowhere. A perfect way to start the show. What follows is a mixture of sleight of hand, plenty of audience participation, extreme beatboxing, acrobatic dancing, and a hilarious Byron Bay sexologist session.

The show Is fast-paced and leaves the audience breathless with wonder every step of the way. The music, lighting, stage production, and content were all flawless, leaving the audience with nothing to do, but sit back and enjoy. There was no lack of audience volunteers, the energy was incredible.

The finale of the show saw each of the five performers presenting, in unison, the same magic card trick to five separate parts of the audience. That this crazy amount of chaotic energy managed to work is a credit to the whole troupe. The entertainers’ ability to work together whilst each having their individuality shine is what makes this show so special.

The season will no doubt sell out so make sure to book your tickets early. Go down the purple rabbit hole to find some magic. Literally.

The reviewer attended the show on 24th Feb