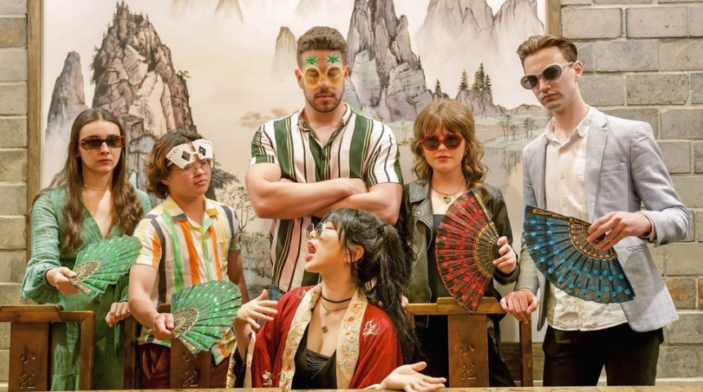 It’s not a particularly good start when the venue doors open late, and the show starts before everyone enters. Then again, it’s probably a reflection of the popularity of Kira Yang filling the Nexus Cabaret room.

Kira, front and centre, is the subject of Not Your Average Asian Girl, following her transformation from being quiet and shy on stage to embracing and eventually stealing the spotlight.

“Let’s Get Loud”, sets the tone of the show. Kira was bought up with traditional Chinese parents who believed in womb training and rigid weekend study discipline. She learned classical piano, but Kira knew at an early age that she wanted to break out of that mould.

After many negotiations with her parents, she enrolled in boarding school, particularly to meet boys. Regrettably the school was just as strict as her parents. However she clandestinely meets up with a boy, proving no barriers will stand in her way to get what she wants.

At school she discovered musical theatre. Undeterred by the fact that the only roles for an Asian girl were in Miss Saigon, she enrols in theatre school, and, against the odds, gains her confidence and finds her voice.

The audience is engaged in Kira’s development, that universal story of battling the odds to find happiness and a place in the world. The frank storytelling style intermingled songs from great musicals like Hamilton, Cabaret, Beauty and the Beast and Chicago with tracks from pop icons including Ariana Grande and Taylor Swift and it all worked perfectly together.

To see a girl who couldn’t swear and was scared to speak up joyously end the show with “Shout” and “Let’s get Loud” makes Not Your Average Asian Girl a heart-warming and uplifting celebration. For anyone who’s had doubts about following their passion in life, this cabaret show gives hope to follow your dreams.

The reviewer attended the show on 27th Feb