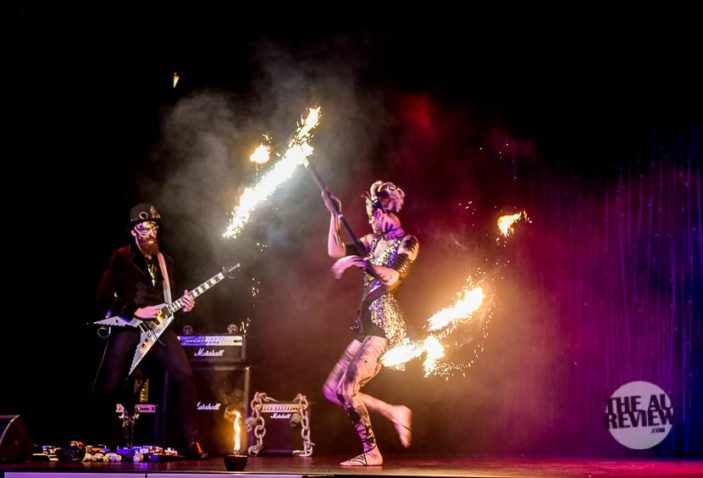 Dystopia is a dark fantastical production set in a post-apocalyptic future Earth. The opening screen shows a static montage of bomber planes, skulls, wartime destruction. This sets the scene for the performance to come. The audience catches glimpses of the characters, an elfin ballerina, a doll, lone guitarist, a zombie troupe and more.

The lone guitarist is dressed in futuristic steampunk costume; top hat and tails, bearded, goggles, an axe guitar. He has a phantom of the Opera feeling. The stack of Marshall amps puts out a mighty sound. This Dark Overlord leads the performance which has wild dancing, fire twirling, jugglers and acrobats. A ballerina succumbs to dark forces. A doll swings from a trapeze. A cloaked juggler performs. A sword becomes a blade of fire. The highlight of the show is when a high priestess sheds her cloak and twirls a triple-pronged fire stick.

The guitarist, Scott Reed, holds the show together and has a chance to shine in a solo performance near the end of the production. His talent and skill with the guitar is evident as he shreds and contorts. The CircAxe performing art troupe deserves credit for training and showcasing upcoming young performers.

The reviewer attended the performance on 7th March. The season has finished but CircAxe can be found on Facebook