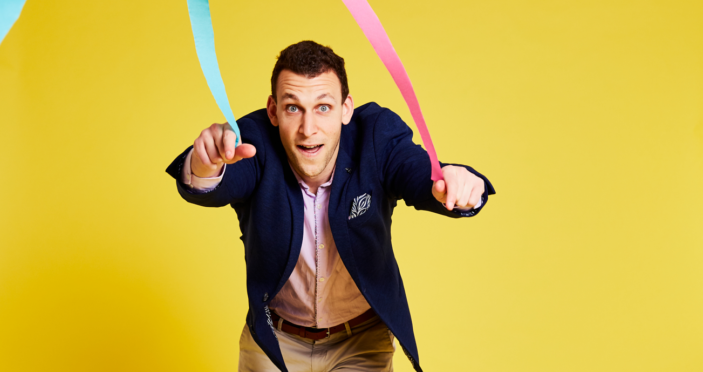 To say that it’s been a difficult time for the arts industry over the last year is an understatement. The Adelaide Fringe was one of the last events held in 2020 before Coronavirus hit and is now back in a far reduced capacity and social distance friendly way. Which doesn’t mean that everything is smooth sailing. Three Course Menu was originally billed as Michael Shafar, Peter Jones and Joseph Green, but Jones and Green were unable to attend due to COVID restrictions. In their place, local comedians Kel Balnaves and Luke Benson have stepped in.

Michael Shafar opens proceedings. The stage itself is a converted shipping container opening out onto the hillside within Gluttony. The audience were simultaneously getting sunburnt and rained on. As Shafar quips, after a heckle, this is the only time he’s been heckled by both the weather and someone from outside the venue.

Fringe award winner, Kel Balnaves has a solo Fringe show called Useful. After a bit of an awkward first-date style introduction, we soon discover what a “dad” he is. Whether it’s words of advice to the young ‘uns or helping an old couple park their oversized caravan in an undersized plot, he knows how to help. His laconic style of people watching grows on the audience and the laughs come more naturally as his set progresses.

Next up, the 6’ 7” tall Luke Benson is like a bellowing giant of a man. His faced paced banter about Coming to Australia, meeting girls, his height, his observations of Australian culture, all add up to a belly laugh full of fun. Benson is clearly at ease making a spectacle and his easy friendly style wins over the crowd quickly.

Although the three comedians all share an ability to tell a story, Michael Shafar is the least politically correct of them all. Because he’s Jewish he can tell German jokes. Because he’s had testicular cancer, he can tell cancer jokes. Of course, there are COVID jokes. In fact, no subject seems sacred. Border Patrol for example.  But his fresh-faced way of telling his stories have the audience in stitches. Sometimes the audience nervously looks around to get validation from others, other times the laughs come spontaneously.

If you love stories that touch reality and aren’t too concerned with cancel culture, this is the show for you. If you’re easily offended, look away now. A show for people who love to laugh at life’s lessons.

Luke Benson’s show ‘Coming to Australia’ is at The Piglet until March 14th. Tickets available HERE.

The reviewer attended the performance on March 7th.