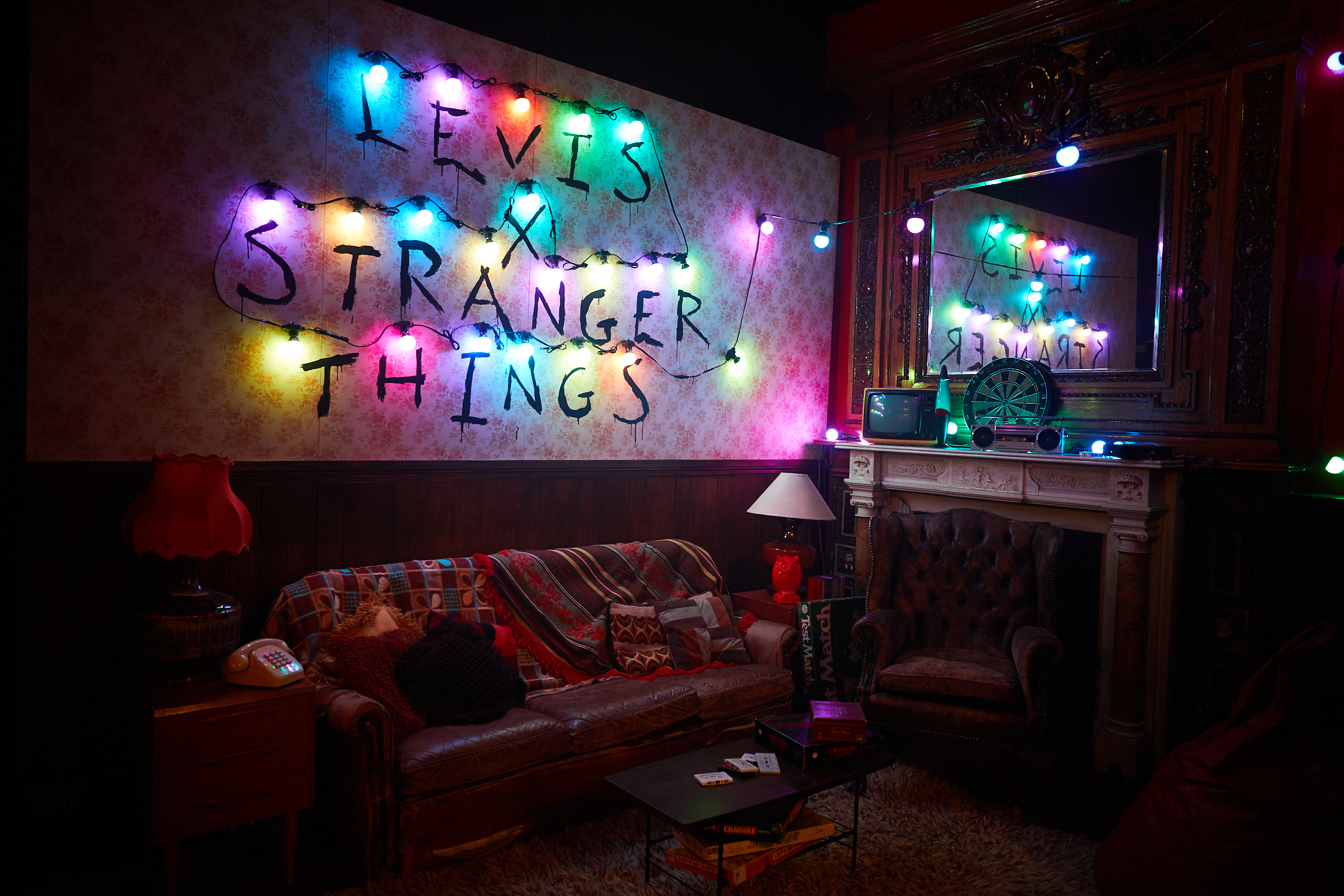 I was standing in a darkened bar, full to the brim of influencers, a vintage bike wedged behind me in a copse of fake trees. In front of me, a bank of cathode ray TVs blinked and sputtered. Next to them, a perfect replica of the Byers living room, with LEVIS X STRANGER THINGS spelled out beneath colorful lights. I was at the Levis launch for its new Stranger Things clothing line.

How did Stranger Things manage to get a stranglehold on us? And where did all this stuff come from?

Just to be clear, Levis kind of nailed it. Some of their new Stranger Things line is pretty perfunctory – hoodies that say “Eleven”, the Levis logo flipped upside-down. But for the most part, their line is spot-on. They’ve got a licensed recreation of the sublime button-up Aztec shirt Eleven wears towards the tail end of the season, and a replica of Dustin’s adorable Camp Know Where shirt. All of this was on sale on the night, pinned to a portable Starcourt Mall installation.

But why did I want all this stuff? Why did my finger itch and begin to draft towards the BUY button with every whisper of new merch for this third season of Stranger Things?

Let’s button on a Hopper-style Magnum PI-wannabe detective shirt, grab our partner, and head out to get to the bottom of things.

First of all, this season of Stranger Things is the best yet. Not that anyone buying this stuff pre-release knew that, of course, but now the cat is well and truly out of the bag. The eight episode fusillade of eighties-inspired magic was released on Netflix in a single load, and the internet is already aflame with speculation over what comes next. The premise is simple, and great – the year is 1985, so we’ve jumped ahead. Our ragtag group of heroes, physically and emotionally battered after the events of the previous seasons, are all over the shop.

El is basically Hopper’s daughter, and won’t stop making out with Mike, which is winding Hopper up real bad. Lucas and Max are a couple. Joyce Byers is thinking of selling up and moving away to escape the traumatic memories that assail her. Steve didn’t get into uni so he’s being punished with a job at Scoops Ahoy, alongside newcomer, Robin. Will, still raw from untold horrors, just wants to play some goddamned Dungeons and Dragons. And Dustin is back from science camp… with a homemade antenna, that just so happens to pick up a rogue communication.

The stage is set for a flurry of intersecting plotlines, all cribbed gleefully from, and paying tribute to, the best of the best of the cheesiest eighties movie tropes: there’s Red Dawn, Day of the Dead, Magnum PI, even some Neverending Story thrown into the mix here. It’s the best the show has ever been, and the finale will leave you utterly breathless (Stick around for the post-credits sequence and then call +1 (618) 625-8313 on your phone for a proper treat).

I honestly believe the reason that eighties nostalgia hits to hard is that many of us, many of us who love this eighties thing, that is… we were born in or around that era. It makes us feel young again, in a weird way. And let’s be honest: the neon-soaked, pre-9-11-weary America was a bizarre, distended, enchanted place. Hollywood schlock had a sense of abandon, of joy, and a sense of place. When you get that eighties feeling, it’s like you’re really there. When we watch Stranger Things, suddenly we’re in Hawkins.

The Levis event, and the in-universe clothing and marketing of their new line, is brilliant because it lets you feel there in a very physical, tangible way. You get to wear the clothes they wore, the logo of the school they attend. Game of Thrones might have been huge, but who the hell wants to walk around in a contrived leather hauberk? Far better to whack on a replica of the Scoops Ahoy sailor hat (thank you very much, Hot Topic).

If you want to really, really feel like you’re in the basement playing D&D with the Stranger Things kids, Wizards on the Coast have gone full-blown meta, releasing a vintage-style Stranger Things D&D campaign. It’s packaged like a classic D&D box, and is era-appropriate, down to the typeface on the character sheets. It’s such an organic, effortless brand fusion that I was winded when I first saw it. It’s super fun to play, too; we sat around with the Stranger Things soundtrack spinning on vinyl, pretending we were really there. It was glorious.

Oh, and two of us at the table were playing while wearing Stranger Things Nikes. The shoes are basically modeled after those worn by the athletes at Hawkins High, and have been designed to feel in-universe – that is, they don’t say “Stranger Things” on them. They could be props. They’re smart, stylish, unobtrusive fashion purchases that fans will freak out over, and non-fans will dig for how stylish they are, and the box they’re in is full of crumpled newspaper from the local Hawkins rag, brimming with headlines leading up to the fourth of July. I was also wearing the full Hawkins High track and field outfit, but I’m a chronic impulse-buyer, and I may have garnered a few eye-rolls from my fellow players alongside their jubilant dice-rolls.

Another smart purchase, albeit an insanely expensive one? The Stranger Things LEGO set. I’ve been building movie tie-in LEGO sets for years, and I have never enjoyed myself as much as I did assembling this. It’s being hailed by LEGO nerds as an unprecedented build, letting you create the Byers house, then create the upside-down version of the Byers house, smush them together, and create a set you can flip upside down to transition between the real world and the upside down!

It comes with the Hawkins Police truck, as well as minifigs of Hopper, Joyce, Will, Mike, Dustin, Lucas, Eleven and the Demagorgon, and it’s utterly gorgeous. It’s also limited edition, so unless you want to have to scour the net for an expensive copy of frankly the best LEGO build in recent memory, get on it ASAP.

There’s a tie-in line of Baskin Robbins Stranger Things ice creams, marketed to look like they’re straight from Hawkins’ latest ice cream joint Scoops Ahoy. There’s a Chia pet that looks like Dustin, allowing you to grow his trademark curls. There’s even a replica of the bike Lucas rides in the show!

Oh, and there’s the video game, of course. Created by BonusXP, the team who made the fantastic free mobile game for the release of season two, it’s a streets of rage / open world adventure game. You can grab it on basically every platform, and the eight-ish hour campaign follows the plot of season 3 very closely (so don’t play it until you’ve finished the finale)! It’s worth a look. More interesting, though, is that it evokes the era when tie-in games were weird, janky, and were slavishly tethered to the plot. This is no different, but it also feels like something the Hawkins kids would feasibly be into playing.

Back at the Levis party, my hand hovered over the “buy” button on a replica of Eleven’s Aztec print shirt. Did I need it? Did I need a shirt from a fictional mall, from a work of fiction, worn by a fictional character? Yes. Yes, I did. Because if this show does anything, it makes us want to be there. It makes us yearn to head back to an era just out of reach, take part in adventures that our lizard brains are still convinced could totally have happened.

The shirt arrives in three weeks.

Let’s hope I don’t get a bloody nose trying to slam my door shut while wearing it.

Season 3 of Stranger Things is now streaming on Netflix.