Film Review: Bombshell lacks the power of its namesake as it pulls its punches 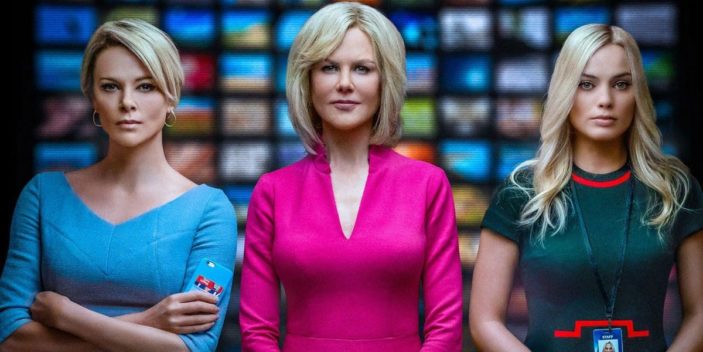 Ever since the Harvey Weinstein scandal, the world had drastically changed and stories of sexual violence have gone through the roof; exposing all the reprehensible actions that have been swept under the rug for decades in the entertainment industry. Since then, the boom has reached worldwide, exposing other horrific stories in the process. What is ironic about this is that the juggernaut known as Hollywood is striking while the iron is hot; greenlighting films that of such subject matter that could be considered as either illuminating or exploitative.

In the case of 2019’s Bombshell, the talent behind it leaves the audience a lot to consider whether the film could be considered in either way. The first reason is screenwriter Charles Randolph, who is fresh off of his successful endeavour with Adam McKay‘s The Big Short; which took a true story and gave it a fresh comedic punch that proved compelling and enjoyably absurd. But the main reason is the director Jay Roach, who is best known for making hit comedies like the Austin Powers films and the first two entries in the Meet The Parents trilogy.

Looking at his involvement at face value, it does seem problematic but audiences outside of the US are less familiar with Roach’s TV movie star-studded efforts that examine true-to-life political matters like Recount, Game Change and All The Way. Having knowledge of his recent work, there is a chance that Bombshell could work as a film that is a scathing examination of sexism in the workplace/media spinning and an in-depth look at the ramifications and consequences of one’s action in said situation.

The story of Bombshell is a dramatization of the accounts of several women who worked at Fox News, who set out to expose the CEO, Roger Ailes (John Lithgow, both believably repugnant and menacing) for sexual harassment. The film follows the stories of three women: Megyn Kelly (Charlize Theron), who is one of the most popular female anchors in Fox; Gretchen Carlson (Nicole Kidman); who is the anchor of Fox and Friends until she is demoted into a less popular show with an inferior timeslot; and Kayla Pospisil (Margot Robbie), a bright, new intern who is also a religious conservative.

While the film’s intentions are good — which isn’t saying much — and the performances from the cast are all above-average, Bombshell is unfortunately a film that pulls its punches; lacking the true depth and filmmaking prowess to make such powerful subject matter compelling and rich.

In terms of its storytelling, the tone of it is quite confused as it starts off as self-aware — due to the fourth wall breaks from the actors — to brutally matter-of-fact like in a scene involving the meeting of Pospisil and Ailes; to amusingly barbed as it points out all the hypocrisies and unbelievably reprehensible actions that are just swept under the rug in at the workplace. This may be due to the script by Randolph, in which the snark conflicts with the serious subject matter to the point that the film becomes quite disingenuous.

The presentation leaves a lot to be desired; even with acclaimed cinematographer Barry Ackroyd. But all of that work amounts to the fact that the film looks a lot like Roach’s TV movie work — complete with handheld camera blocking, plain use of Powerpoint-esque montages etc. — in which that if the film were released on television, it might have been better served there in terms of critical evaluation. Even the most intense scene in the film is shot in a way that feels both exploitative and disturbing, which can make the film seem quite duplicitous in its intent.

Speaking of evaluation, there is an interesting conundrum about the contrasts between the cinematic counterparts and the real-life counterparts; particularly with the case of Kelly. Whilst Kelly is shown to be racist in real-life — her defense of “blackface” being one of many facts — the Kelly in the film is shown to be nobler and conflicted in her life as well as her career stature; which does bring an interesting point. Can the status of being a sexual victim be seen in black and white? It’s just a shame that the film does not delve into any of this potentially illuminating content, making the film frustratingly skin-deep.

That said, what makes the film watchable are the performances from the cast. Thanks to the make-up team — Vivian Baker and Kazuhiro Tsuji — Theron is a dead ringer for Kelly, particularly due to her mannerisms and speech patterns. However inaccurate the character portrayal may be, Theron manages to keep the dramatic stakes believable and watchable.

Robbie does the best she can with her two-dimensional character Pospisil — which is a composite of many women in the workplace of Fox — and succeeds quite well. Kidman however is the weakest link, not to the fault of the actress but due to the fact that her character gets sidelined from the second act to the climax. As for the supporting cast, all of them hit their mark with some — Alanna Ubach, Malcolm McDowell, Kate McKinnon, Nazanin Boniadi — stealing the show with their striking performances.

Bombshell does not live up to its namesake due to the infuriating lack of depth in examining its subject matter and its annoyingly duplicitous tone. But the performances from the cast and its timely premise does make the film watchable, yet unmemorable experience.

Bombshell is in cinemas now.