Back in November, the sparkling new terminal at Louis Armstrong New Orleans International Airport (MSY) opened its doors; a wonderful and long overdue change for anyone who remembers coming in to the old terminal. The US$1.3 billion terminal spans 972,000 square feet and features three concourses, 35 gates, and features the latest Delta Sky Club – accessible to members of the airline’s frequent flyer program and select partners – including Gold and Platinum Members of Virgin’s Velocity program.

Accessible shortly after security at the start of the C Concourse in MSY’s new terminal, you’ll find the lounge clearly marked and up some stairs, with Delta also positioning service desks outside the entry to the Sky Club. They check you in quickly and once upstairs you find yourself surrounded by a warm design in a relatively intimate atmosphere – with additional help desks right by the entry, should you need to inquire about your flight. 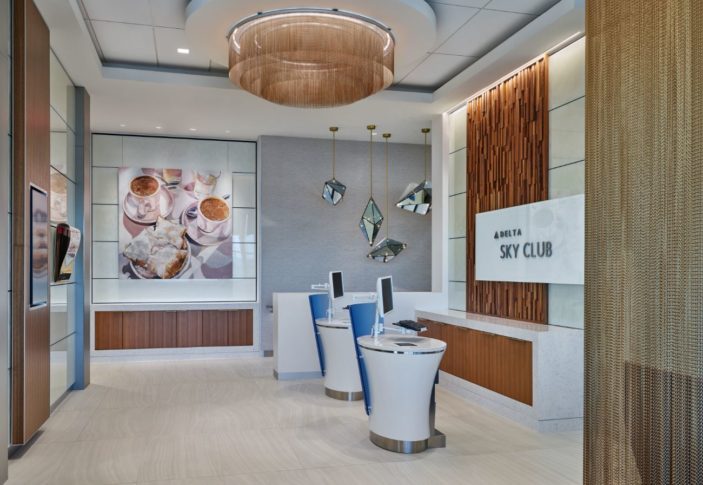 The lounge is on the smaller side compared to some airports, but there’s plenty of seating, with charging stations everywhere, a comfortable bathroom, and a buffet with a bar at the end. The room itself is lined with local art, and the wi-fi is fast and free. Though that’s not exclusive to the lounge – the whole new terminal has terrific complimentary wi-fi.

Because of security changes at this airport, you could technically bring a guest who isn’t flying into the lounge with you – should you have a guest allowance. In an interesting move – and one that hasn’t been possible in America since 9/11 – MSY is welcoming pre-approved, non-ticketed passengers in post security. You have to organise it well before you arrive, but check out the details HERE.

Delta operate all their flights out of the new terminal, with services to eight of their U.S. hubs, and as I was flying to Toronto, I travelled on one of their newer Boeing 737-900ER aircraft via Atlanta. The seat was very comfortable and had screens on the back of each seat, with live TV and a massive list of movie and TV options. Free non alcoholic beverages were distributed with the option of cookies or Cheez-Its. If you’re flying Comfort Plus – which you’ll often get upgraded to if you’re a Gold or Platinum velocity member and flying on a “Main” ticket – you’ll also get free alcoholic beverages in addition to the extra legroom.

Look out for more new lounges throughout the Delta network over the next few years. There’s a 28,000-square-foot Club arriving in Salt Lake City this year, and LAX will get a new club in 2022 – with both promising a Sky Deck and spectacular views of the airport.