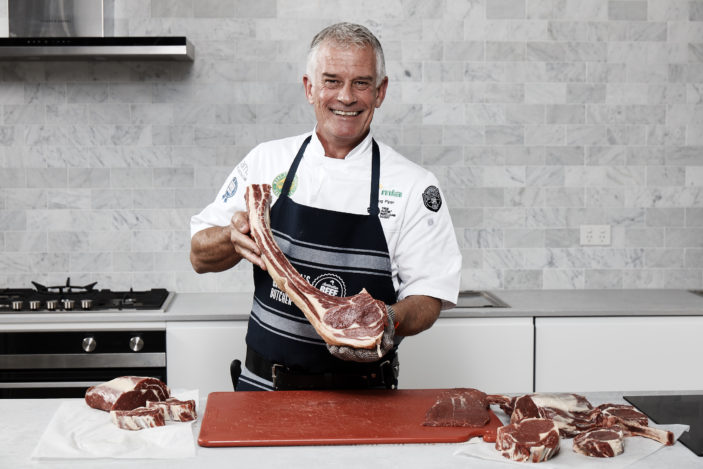 With so many beef options out in the market, it can be overwhelming to choose the perfect primal cut for the right occasion. Luckily for you, The AU Review consulted with expert butcher Doug Piper at Australian Beef, who has given us the lowdown on picking the best cut.

From the most popular BBQ cuts, to underrated and affordable winter roast essentials, Doug breaks down the variety of beef that is best suited for any type of cooking. And to double-down on that knowledge, you can grab smartphone apps Steak Mate and Meat Cuts to help you get that perfect steak.

If you’re looking for a flavoursome and tender piece of meat, look no further than the scotch fillet. It is one of the most popular primal cuts and comes from the animal that sits between the strip-loin and the chuck. Also known as the rib eye steak – but without the bone.

To make sure that you find the best variety of scotch fillets, Doug suggests trusting your eye appeal and looking out for that cherry-pink colour in the meat.

“I like to look for something that has a nice pink colour with a little bit of marbling through it because then I know it’s going to eat really well. I’d steer away from steaks that appear dark in colour because you’re not to get a good eating experience with that.”

You can roast your scotch filet whole, slice it thinly for a stir fry, or grill it for a perfect, juicy steak. Doug explains that before cooking any steak, take the meat out of the fridge for 10-15 minutes before cooking it. This ensures that the steak cooks evenly.

“Make sure the first thing that you do is make sure you heat up your pan or BBQ first. It really needs to be hot before you cook it. It is best to cook your steak or whole scotch fillet in a hot pan and then lock in those juices and place it into a hot oven.”

Rib eye on the bone 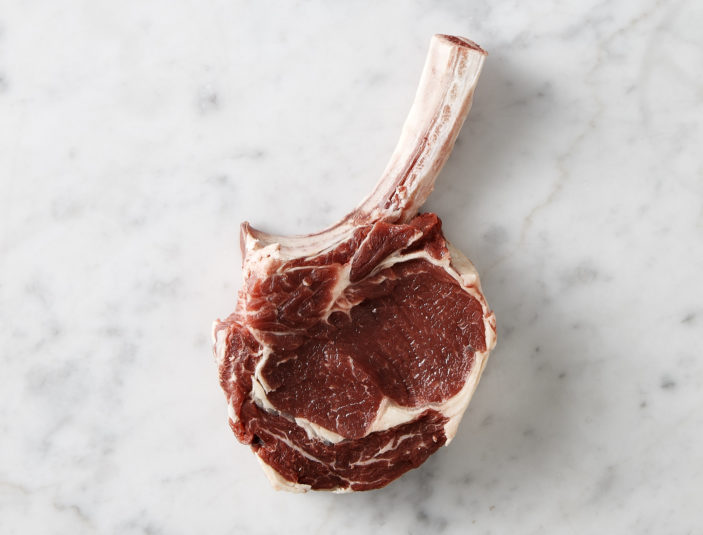 As they both originate from the same cut, the rib eye steak is essentially the scotch fillet but with the bone still intact. Leaving the bone in the rib eye adds extra flavour to the steak and becomes moist and succulent when cooked.

Just like the scotch fillet, Doug explains the best way to cook it is by taking the steak out
of the fridge 10-15 minutes before cooking. “Lightly oil and season the steak with salt and pepper and place into a hot grill or BBQ. Cooking the steak varies depending on the thickness of the cut. Slicing it thinner will cook a little bit quicker. Steaks are best served medium and medium rare ”

Extracted from the rib section of the beef, the beef short ribs is loaded with marbled rib meat which makes it the ideal cut for a slow cooked or roasted meal.

Before buying it from the butcher, make sure that you ask them to remove the outside fibre that looks like fat (although it isn’t). You can also do this yourself by scoring the top of the bones with your knife and cutting through any fibre that is left. This will allow the meat to move around and not curl up.

To make sure you seal all that delicious and unctuous beef flavour, Doug recommends flouring the ribs and browning them in a hot pan before you slow cook or roast the meat.

“You can Cook it for 12 hours on a low temperature. I like to smoke it for 2-3 hours and put a nice rub or baste. Then I’d rub it in some brown butchers paper or baking paper and get the temperature for about 90 degrees. Then I leave it there for about 8-9 hours.” 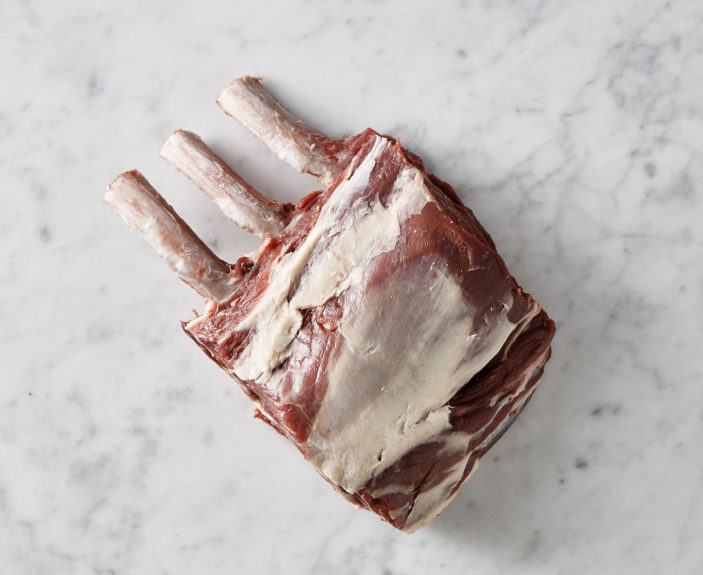 As the name suggests, this is a best cut for a slow roast. It is the larger cut of the meat that comes from the beef forequarter which makes up the rib eye and scotch fillet. As Doug mentioned, bones in meat extract immense amounts of flavours.

“Flavour being extracted from the rib bones makes the perfect meat to roast in the oven. With any type of roast make sure you always sear it in a hot pan before putting it into the oven. This allows the meat to seal in all the flavour and juices and the caramelisation gives the meat a lot of flavour.” 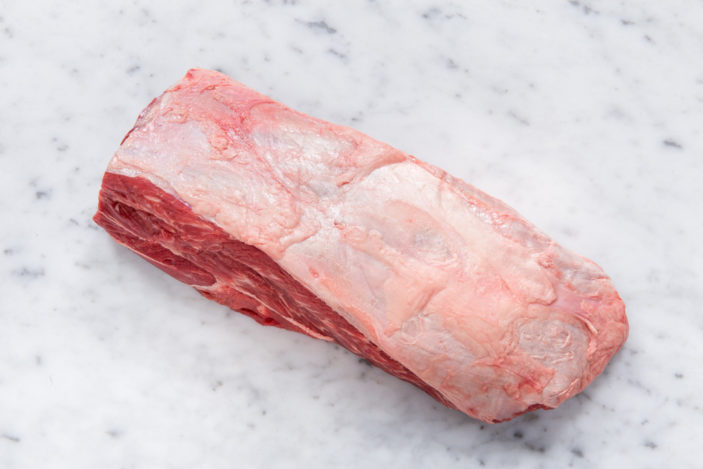 An oyster blade’s versatility makes it the ideal meat that can be cooked in multiple ways and still maintain great depths of flavour – even if you overcook it. Whether you want to roast it, slow-cook or throw it into a stir fry, the oyster blade is the one to go for. Doug explains how it is the best roasted meat to choose if you’re on a budget.

“Oyster blades are one of the old tradition cuts. This cut has always been around which can sometimes be called Y bones or BBQ blade steak which is taken from the shoulder.

It is a little bit more chewy – but it’s very forgiving. You can overcook this and it’s still going to eat tender because of the connective tissue in the meat. You can roast it as a whole, or butterfly it and season it out to make a big roast which makes a great affordable Christmas roast. 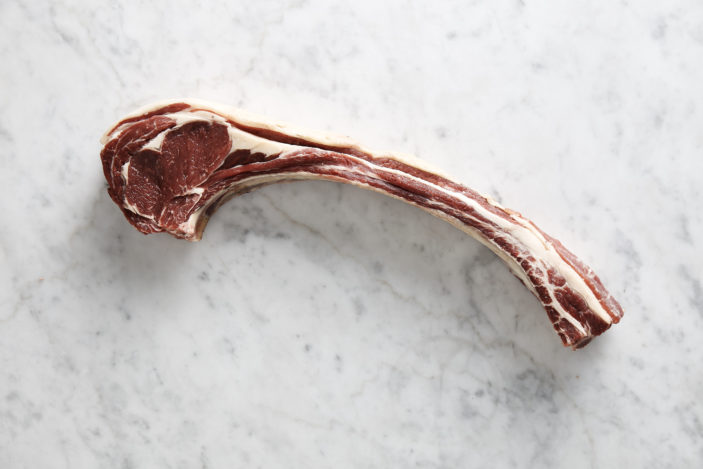 If you want to impress your friends and family, the tomahawk is arguably one of the most iconic steaks of them all. It comes from the scotch fillet on the bone with the entire short ribs attached.

As it is a thicker cut, it is the ideal cut of steak to share at the dinner table. Grilling is the best method to achieve that roasted, crusty bark on the outer layers whilst the meat tenderisers on the inside. It is Best served medium or medium rare and can also be roasted by seasoning well with oil, salt and pepper. Make sure that you sear it and seal the juices before placing in a hot oven. 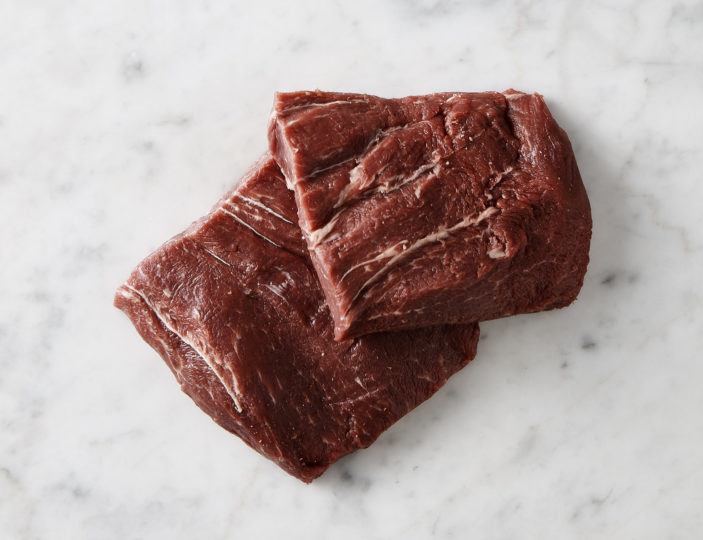 One of the most affordable and underrated cuts in the market is the flat iron steak. It is taken from the oyster blade and is one of the leaner cuts of meat. While it’s best served on the grill or BBQ, Doug explains that it often puffs up, so make sure you cook it a little longer to make sure it’s cooked to your liking.

“This is one of the steaks that are a little harder to cook as this type of steak that shrinks in and puffs up, which becomes quite thick and so your cooking times may vary – but because it’s from the oyster blade, it is very forgiving and it will still eat well even if you overcook it.”

Although it’s been around for years, many aren’t aware of it’s versatility in flavour or affordable price. “I don’t think there are many steaks in the animal that will eat as good or taste as good as this one. It is very economical because they’re from the shoulder, so it’s cheaper in price. You can cook it in stir fries, stroganoffs, diced up in a casserole, BBQ skewers or just a straight up steak.”

For more information around cuts, cooking tips, and recipes head on over to Australian Beef.