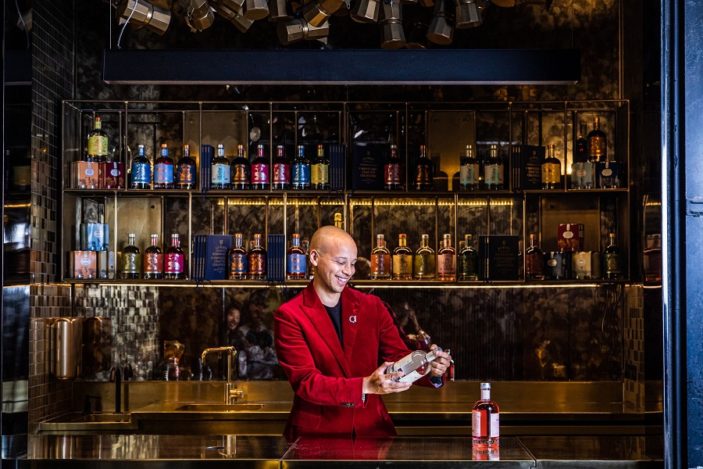 A few years ago most discerning drinkers would have scoffed at the idea of a bar exclusively slinging non-alcoholic spirits, but times have almost certainly changed. In 2021, Lyre’s Spirit Co – a company that produces award-winning non-alcoholic spirits – is sitting pretty with an impressive $500 million valuation, and the appetite for sippin’ on the drank without the drunk is undeniable.

This is why QT Sydney hooking up with Lyre’s is such a big deal in Sydney right now. The most consistently exciting hotel in the city has used its stylish “Untapped Laneway”, opposite the QVB Light Rail stop on George Street, to host a pop-up bar with Lyre’s. Dubbed Bar None, the big brassy nook will be operating three days a week for the next two weeks with top-notch bar bites coupled with non-alcoholic liquid libations that will allow guests to enjoy delicious cocktails without having to worry about the hangover.

For those curious about the whole non-alcoholic trend, there really is no better opportunity to taste some award-winning non-alcoholic tipples than Bar None. From 4pm on each of the following nights, the unique laneway bar will be teeming with bespoke cocktails like Lyre’s Non-Alcoholic Espresso Martini (Lyre’s White Cane, Coffee Originale, and Parlour Cucina Coffee), Lyre’s Negroni, Lyre’s Margarita, and a range of summer spritzes. There’ll also be Lyre’s Classico Grande available on pour by the flute for those who want to experiment with no-alcohol bubbly, and beer lovers will get their licks in with Heaps Normal’s Quiet Deeds XPA on tap.

Given the street-legal-ness of all these drinks, each and every one of them will also be available for takeaway all evening, so the best approach would be to rock up on a Thursday night, have some pre’s at Bar None and take a few of those non-alcoholic cocktails to Pitt Street Mall so you can feel a bit edgy while you churn through your Christmas shopping.

QT Sydney isn’t just offering Lyre’s its Untapped Laneway space for the pop-up, the highly awarded hotel will also be serving classic cheese and charcuterie boards from Bar None.

Bar None is open from 4pm – 10pm on the following days:

Oh, and you can’t book. Bar None only accepts walk-ins so rock up early to avoid disappointment.

How to get there: Bar None is located opposite the QVB Light rail stop on George Street, or saunter down the laneway next to 49 Market Street.