When I think about taking a budget flight, I tend to fly for a maximum of 4 hours – about the length of a flight from Perth to Sydney. Anything longer than that and I’d never think twice about flying any budget carrier. But I had a 7 hour flight from Kuala Lumpur to Tokyo booked for me with AirAsia, and I thought I’d try to soften the blow to my legs a little by upgrading my ticket with a seat in their Quiet Zone.

Was it worth it? Only one way to find out.

As with all AirAsia flights, all passengers are supposed to use their self-check in machines before baggage drops to print their tickets and luggage tags before proceeding to the bag drop counters – just my luck that it didn’t work for me and instead of being allowed to the allocated bag drop counter to sort it out, I had to line up at the counters across the way.

This was the first time I had to go through passport and ticket checks twice, back to back. I’m not sure if this is the standard with all flights now so keep that in mind when you’re planning ahead and also keep in mind that KLIA2 is possibly one of the worst planned airports in the world where you can take up to 30 minutes to get to your gate from immigration.

AA boards by zones, starting from 1 then 3 then 2 (which honestly makes no sense but okay sure) but I got to the gate after they started boarding and since there was an extra passport check, I could walk straight into the plane with no fuss. 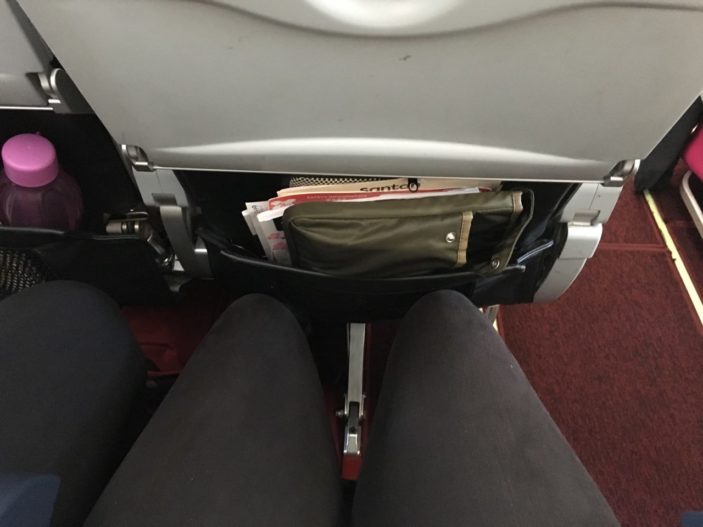 The quiet zone provides slightly more leg room than regular seats but honestly, that luxury only lasts for so long until the person sitting in front of you reclines their chair back as soon as the seatbelt sign is turned off. It looked like the only worthwhile seats were the ones right at the front of the different cabins, but any seat with more legroom is considered a “Hot Seat” so you’d have to fork out more money for those.

Otherwise, the width of the seats remain the same as the other cabin and height-wise the seats were adequate with adjustable headrests. Ultimately, I was pretty much cramped throughout my 7 hour flight with no wiggle room that made it near impossible to get even a wink of sleep, especially not with the other passengers walking up and down the aisle hitting me unapologetically… 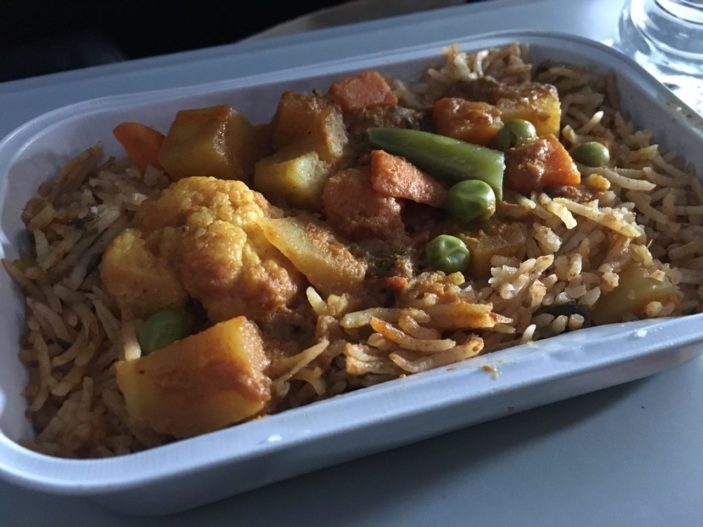 You can pre-book a meal for the flight for RM15 (AU$5) but if you want to be extra fancy with a potato salad, Haagen Dazs ice cream and a Snickers bar, you could pay RM25 (AU$8) instead, and both meal types come with either bottled water or a can of Coke. Buying food on board itself would cost you between RM10 (AU$3) to RM15 depending on the dish you choose plus a bit extra for bottled water or a soft drink, and alcohol costs as much as the meal itself. Their menu seems to have expanded slightly since the last time I’ve flown them, with things like chicken teriyaki and onigiri available, and now they have their own Santan branded cup noodles.

I’ve always enjoyed the food on AirAsia compared to even some meals I’ve been served on full-fledged carriers and this time was no different. I pre-booked the vegetarian briyani and I’m glad to say that I wasn’t disappointed, the vegetable curry was packed with flavour and I finished my meal satisfied.

There was one flight attendant who looked like she’d rather be somewhere else. Before the flight, she had her ID tag stuck on my face as she was trying to look for space on the overhead compartments and hadn’t apologised nor acknowledged that I was even there, which had put me off even before the flight begun. Otherwise, the other flight attendants were friendly and helpful while running service. They didn’t fuss when I refused the plastic cutlery for my meal (though I did have to reject it from two different attendants despite being on the same cart) and they were quick to attend to anyone who needed them.

Since there are a lack of screens on most budget flights, it can get a bit disorienting to be in a plane for more than 4 hours with no idea where the plane is on its journey and how long it will actually be before the flight lands. Of course, entertainment will be an issue – as there is none included, and pre-downloading Netflix shows and movies can only get you so far before you might end up with a neck-ache (or maybe it’s just me?).

I’ve flown other budget carriers on slightly longer flights albeit I flew in “business” and had a lot more comfort. I would say that the Quiet Zone would be a lot more comfortable if I were sitting in the front row but I would say that’s the same as being seated in front rows of the regular AirAsia cabins in general. The food was tasty as usual but service wasn’t the best and if I were to be uncomfortable for 7 hours on a plane, I’d appreciate nicer flight attendants.

I did appreciate the quiet I got with the seat though in all honesty, I wouldn’t fly this way again if I had the choice. The total amount that was paid for the flight (baggage and meal included) would have been the same as flying with ANA or Malaysia Airlines and I would have been a lot more comfortable. But for what it’s worth: it wasn’t a horrible flight, it is just incredibly uncomfortable for those on the taller end of the height spectrum and that for me coupled with the experience I had with the one flight attendant is an absolute deal breaker.

To book a flight with AirAsia, head over to their website.

The writer was provided with the flight by ONE Championship. Featured photo taken from the AirAsia website, others taken by the author.