F&L Feature: Searching for the best Eggs Benedict in Australia 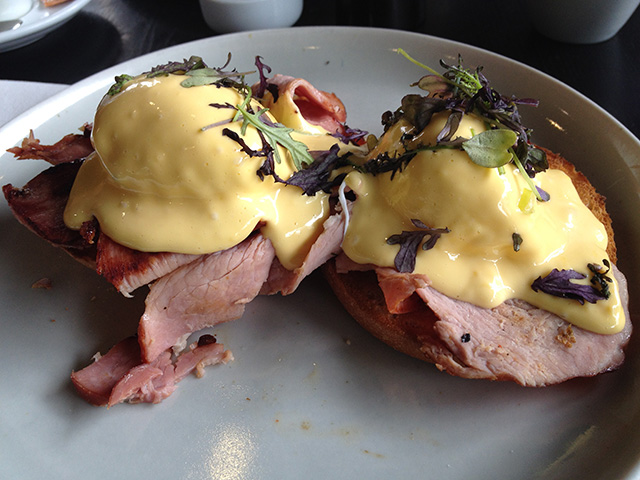 Some six and a half years ago, I discovered what at the time was the best Eggs Benedict I’d ever had. And it was at a place quite unsuspecting. World Bar on the Melbourne Southbank. Everything about the dish was perfect, to the point I’d schedule in earlier flights than I’d need whenever I flew to Melbourne in order to treat myself to one such breakfast. I would even book my hotel nearby. I went on to tell everyone I knew who was going to Melbourne about it, and low and behold, they agreed.

But then, a couple of years ago, they stopped making it. In the reconfigured words of Crowded House, the dream was over. So, what made it so special? It was a beautiful, thick piece of sourdough toast, topped with a huge portobello mushroom, delicious ham, perfectly poached eggs, stunning hollandaise sauce (all important, of course), thyme and a side of this incredible tomato chutney. They made it themselves and apparently it cost a tonne to do each batch. The mix of flavours was phenomenal. There was simply nothing like it. Here’s a bit of a taste of what I’m missing:

Ever since it was removed from the menu to be replaced by a more conventional and frustratingly average Benedict, I’ve been searching the country for the next best Benedict in Australia and today I bring you some of the highlights (and potentially lowlights) of that quest so far. I expect this to be only part one of an ongoing series…

Serving breakfast until 1pm on a Sunday (and a bit earlier the rest of the week), I start my journey at Ryan.Coffee in Picton, NSW, which has become one of the country town’s most popular cafés, with a focus on the sort of charm we might find in Surry Hills or on Brunswick Street. Good coffee accompanied by a simple menu with high quality ingredients and a homely atmosphere. It’s become so popular in fact that Ryan’s has expanded into two other locations.

No breakfast menu would be complete without an Eggs Benedict and their $15 dish provides one of the larger portions of Benedict’s you’ll find, with two thinly cut, beautiful slices of sourdough, two perfectly poached eggs (which, by personal definition and preference is part of the satisfaction the dish brings – there’s nothing better than breaking through the yolk and have it spill all over the plate), spinach leaves, all covered in a light but tasty hollandaise. But it’s the sliced ham off the bone that gives this classic dish an edge here. There is a mountain of ham piled under those eggs – served lightly grilled and in a quantity that may even be a bit too much. But compared to the all-too-common single slice of ham (or bacon parading as ham) it’s a welcome change and makes it a standout Benedict.

At Cook and Archie’s in Surry Hills we find a $18.50 dish that suffers from peak morning hour abuse: it arrives lukewarm after a 30 minute wait. Still, the poached eggs are perfectly cooked, and the spinach adds to the dish nicely. The hollandaise is also a winner. But worth the amount? Not really. It’s far from a filling portion – which you’re looking for at that price. Smoked salmon was another option for an extra dollar or so, as is often the case for many of the dishes I’ll be mentioning here… 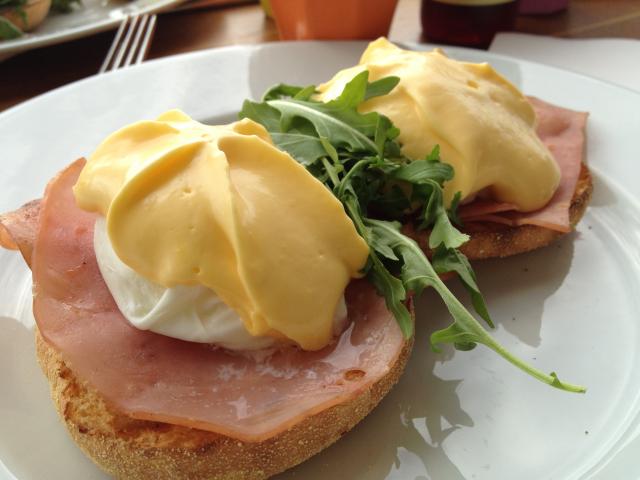 As I continue to travel around the country, I come across the Surf House Cafe in Newcastle, which also kept it classic, serving the dish on English muffin. The hollandaise left a bit to be desired, but on the whole, it’s pretty representative of what you might expect at most cafes around Australia. And sometimes that’s all that matters.

Down in Melbourne, the Benedict comes in many shapes. At places like Perkup Burger on the famous Degraves St (Number 12 to be precise), they do a Benedict Burger for $7.90, with egg, bacon, cheese and Bearnaise in a brioche bun. A rich Bearnaise, perfect for a steak, didn’t quite match up to what the dish usually requires, but was a creative take on the classic dish, and pretty tasty all the same. Las Chicas in Balaclava, meanwhile, brought us the Bikini Blowout Benedict, served with avocado and bacon, all dripping out of a perfect bagel. It’s pretty damn delicious and shows that, as usual, Melbourne wins top marks for creativity. 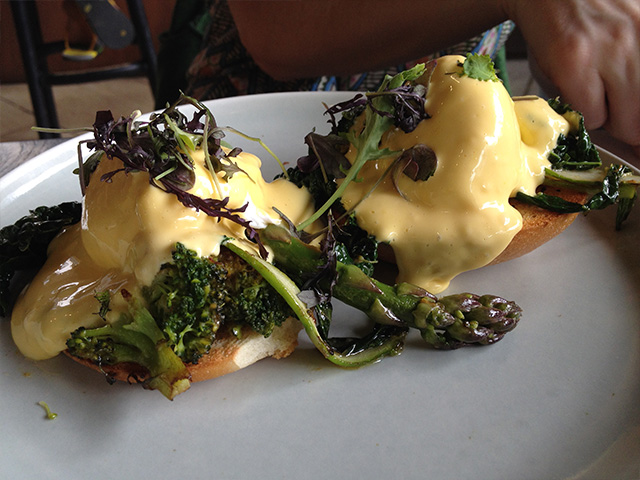 I take us, briefly, over the Tasman to Auckland next, for one of the dishes that reached the closest to perfection. The Store gave us thick smoked ham, a light but delicious hollandaise and their own variation of the English muffin. This specific dish is pictured at the start of this article, and the image above is the vegetarian option, with asparagus and broccoli in place of the traditional ham. And it worked surprisingly well. Both were arguably the best versions I’ve sampled for this article, though given their location, may not fit into the article’s very concept. Still, I felt they had to be mentioned. 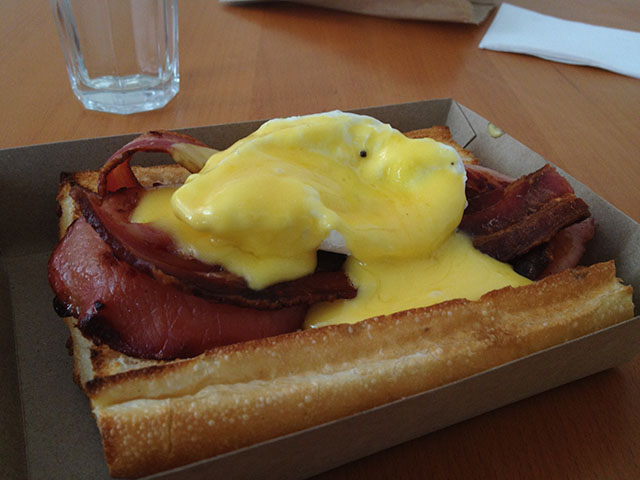 Back across the pond, the recently opened Blacksmith in Surry Hills serves up a $9.50 Benedict baguette, served open face and with one egg (albeit a massive one) and a load of bacon, the breakfast sandwich is easy to squash down and make a huge mess of; just watch the yolk pour over your bread and feel the satisfaction. Their hollandaise is perfect.

Even airlines get in on the Benedict act. On a recent flight with Singapore Airlines, their breakfast was a bizarre version of the Benedict dish, while at the Etihad Lounge at Sydney International Airport, they serve individual eggs, poached with hollandaise. I put it inside a croissant and make myself something of a culinary genius. The two pair well together I must say… 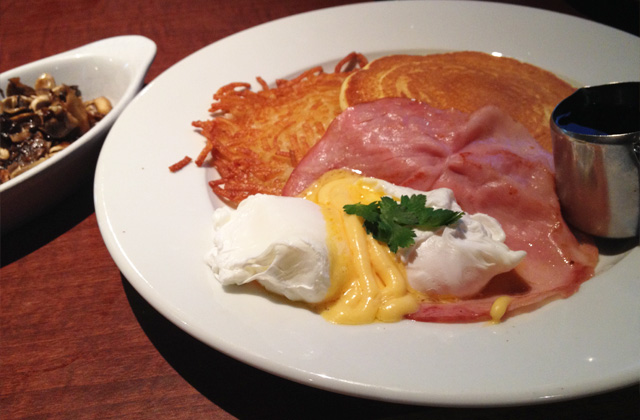 And then there’s Pancakes on the Rocks‘ version, which sort of bastardises the whole concept of the Benedict, replacing muffins with a pancake that happens to be the same size as the ham, throws in an massive and delicious hash brown and gives you the option to throw maple syrup into the equation. Doesn’t sound bad at all, does it? It’s not, even if they’re a bit tight on the serving of the Hollandaise, and at $13 it’s pretty affordable, 24 hours a day.

So where does that leave us? Well, I don’t think I’ve found a Benedict to match what was once the best in the country. Though I may have stumbled upon one of the best in New Zealand along the way. But with all the variations I’ve found in Australia, maybe what I can take away from it all is that there’s no right or wrong way to do Benedict. The very dish I’ve praised, after all, was a variation in itself. It either tastes good or it doesn’t. It either offers something unique or it doesn’t. Maybe there is no “best” Benedict (well, not anymore anyway). Maybe it’s a dish that just needs to keep spreading its wings and then, one day, perfection will be achieved once more. But until then, I’ll keep trying to find it. So stay tuned for further adventures in my search for the perfect dish of this gluttonous but delicious breakfast treat…

The writer honestly did eat all these Benedicts and would like some more please.