Ever wanted to stay inside an old insane asylum? This luxurious boutique hotel in Buffalo, New York has you covered.

Hotel Henry in Buffalo, New York, sits inside a building with an inauspicious history: for a century, and dating back to 1870, it was the site of an insane asylum as part of the Richardson Olmsted Complex. The hotel opened in May 2017 following a decade long restoration project that is seeing the entire campus, which had been designated a National Historic Landmark in 1986, restored and redeveloped, with the hotel, the 100 Acres: The Kitchens at Hotel Henry and the Buffalo Architecture Center taking over a third of the complex.

The hotel’s name is taken from its architect – Henry Hobson Richardson – a nod to the importance of the building’s groundbreaking architectural style, which it itself is after the architect, “Richardsonian Romanesque”. Inspired by the Ancient Romans, but told to be bursting with Richardon’s own eclectic flair, the complex was his first to utilise elements of this style, which went on to influence a generation of architects. The exterior is striking with a castle-like splendour, Medina red sandstone, exposed brick and copper roofs – having beautifully greened with age.  The interiors are best described as tall; untouchable ceilings (at roughly six metres high) with massive four metre tall windows, arches above doorways and striking pylons that haven’t been hidden from view. 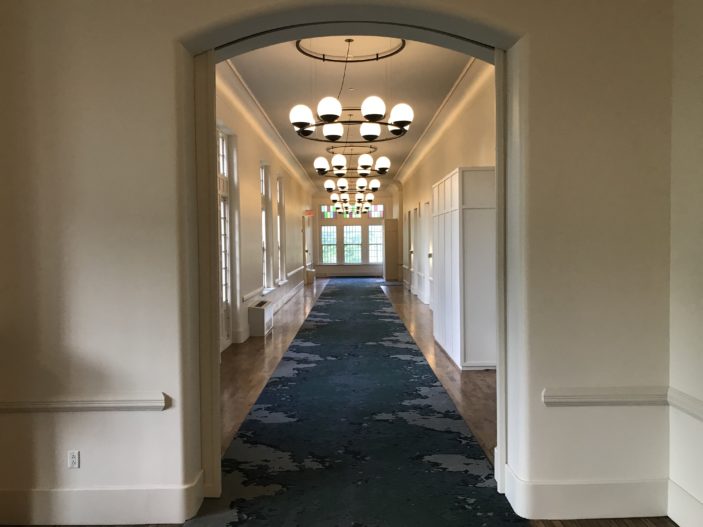 Even if you didn’t know the building’s history, I feel you’d still sense something eerie about walking around its halls. Though the modern touchings of the Hotel are clear throughout – from beautiful lighting fixtures, to tasteful carpets – there’s no amount of paint that would hide the past that sits within its walls. The decision to keep the walls white only adding to that feeling; embracing its history. 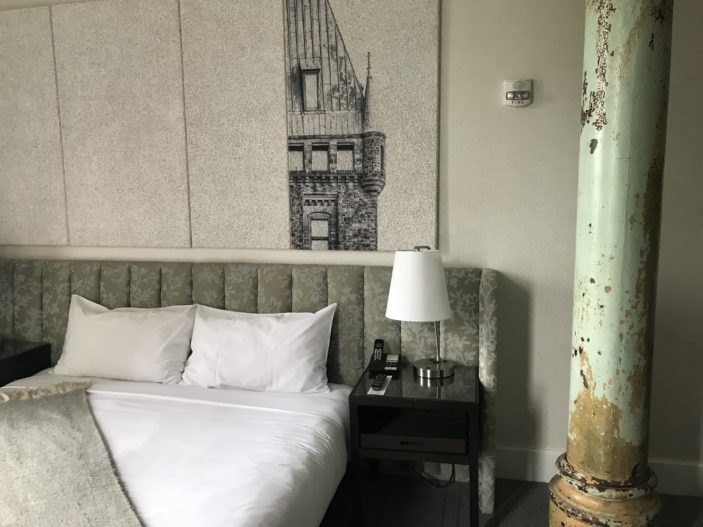 The rooms themselves are pure luxury, with seven room types – impressive given there’s only 88 rooms in the building. But it seems like few two rooms are going to be the same. The standard King, which we stayed in, runs anywhere from 22 Square Metres to 33 Square Metres in size, while the largest rooms – the Loft Suite King – are about 84 square metres in size. Some rooms, like ours, had one of the building’s beautifully aged pylons sitting in full display – a contrast of true architectural splendour to the comfortable king bed that sat beside it, and the modernity of the recessed LED lighting that ran throughout the room – including against the bathroom mirror. 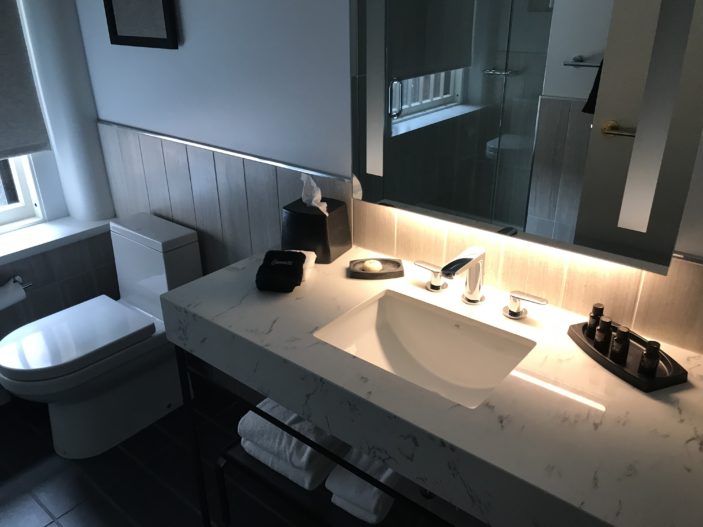 Mandarin and Clary Sage amenities were provided from Milton Brown London, with the bathroom showing off all the modern design and fixtures you’d expect from any hotel; European-styled Porcelanosa fixtures, integrated aggregate countertop and sink, and a massive walk in shower (which has superb water pressure, it’s worth adding). 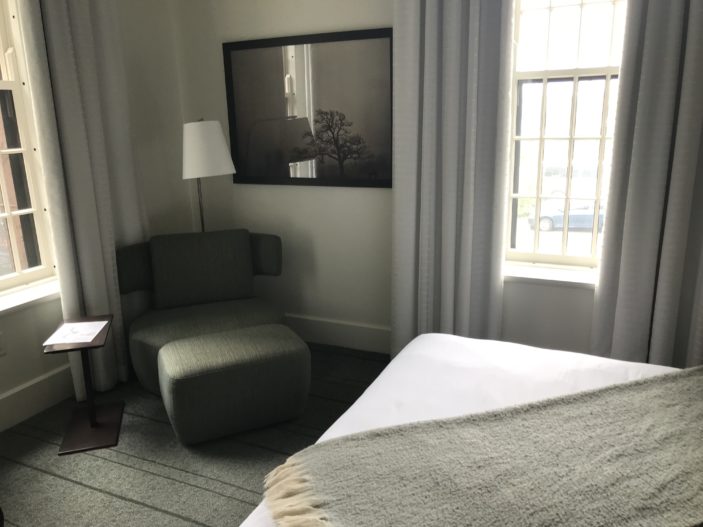 The room – which has some of the longest curtains you’ve ever seen to block out the light from the four metre (14 foot) high windows – has a calm ambiance to it. They’ve gone for creams, whites, grays and greens – holding consistently throughout, that runs through every room in the hotel, from reception, through the maze of hallways that will take you to your room. You’ll find a good bit of art along its hallowed halls, too.

The room’s massive TV has endless channels, and everything you need is sitting out in the open; there’s an ironing board hanging on the wall, and space for hanging clothes by the front door. It’s all been designed with ease and comfort in mind.

They’ve also got the wedding guest in mind, with the hotel offering the entire building for Wedding reservations; a quick look ahead to most weekends in the future, and you’ll find the place fully booked. So if you’re looking for a weekend getaway here, you may need to move your vacation days to the middle of the week. The hotel also offers extensive conferencing facilities and utilises the surrounds of the City of Buffalo itself as its “Urban Resort”.

The hotel sits on the doorstep of 42 acres of the city’s “museum district and cultural corridor”, incorporating Elmwood Village, the Albright-Knox Art Gallery, Delaware Park and Buffalo’s Olmsted parks system. For more on the surrounds of the hotel, read our destination feature on Buffalo, New York.

There’s nothing not to love about the experience of staying in this hotel. It’s luxury in the space of true architectural history, with all the modern comforts supplied with care.  The only downside to the hotel is that it’s hard to get a room – with conferences and weddings booked months or even years in advance, you’ll need to be strategic if you want to get yourself a room at this stunning facility. But do try – it’s very much worth the trip.

For more information about the hotel, located at 444 Forest Ave, Buffalo, NY 14213, head to hotelhenry.com.

The author stayed as a guest at the hotel for one night.