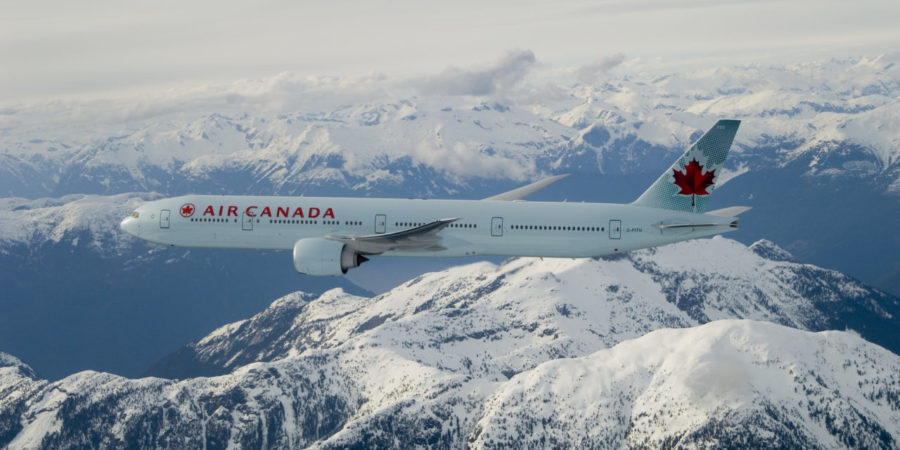 Over the weekend, I flew on Air Canada‘s long haul service from Hong Kong to Vancouver on the Boeing 777. On the flight, I enjoyed an upgrade to the airline’s “Preferred Seating”, which is essentially any seat in economy with extra leg room, which will normally set you back an extra C$130 or so. Those who fly Virgin Australia may be familiar with the Economy x equivalent service we’ve spoken about on the AU before. So is the extra leg room worth the expense?

The check in counter for Air Canada opens up three hours before your flight. If you get there earlier or have a longer stopover, consider sneaking in an IMAX movie if you’ve got a lot of time to kill, or head into the city – it only takes 20 minutes or so and a same day return ticket is barely $20. And if you want to dump your checked luggage earlier you can do so at the in town check in at Kowloon or Hong Kong Stations, giving you a lot of flexibility in terms of your stopover in Hong Kong.

There are a tonne of food and drink options after security, with a massive expanse of an airport to explore. If you didn’t get the chance to grab a Kings Bakery egg tart while in Hong Kong, definitely grab one here. They’re about $2 and are often fresh from the oven. There are a couple of Hong Kong cafes scattered throughout the airport as well. I enjoyed some great, affordable noodle soup at Windows Cafe.

Boarding was pretty disorganised, with everyone lining up at once, causing a massive queue (what’s the point of zones if you have everyone board at once anyway?). And with people fighting over space in the luggage compartments, this also slowed things down – a wider problem airlines are facing with their different luggage policies (though this flight had checked baggage included in the ticket). But all the same, boarding was wrapped up 15 minutes before we were due to depart.

I was in a middle seat on the left side, at the front of the back section of the cabin, next to the emergency exit, meaning I had infinity leg room, but was also right next to the bathroom. You also have nowhere to put your bags – or anything for that matter (if you’re against the window you’re given a little space against the wall, but the other two seats are on their own). You’re also running the risk of sitting opposite a crying baby – as that’s where they sit (bulkhead seating) – and I was unlucky to sit opposite two. So the idea these seats are worth more money has always been a bit misleading. You’re trading extra leg room for other inconveniences.

But what makes it worth it ultimately is that you’ll never have anyone wake you up to get to their seat. And there’s only a few seats on the plane (outside of business class) where this is the case. If you were on the other side of the plane in this section for instance, you’d have the bulkhead in front of you (still extra leg room and a “preferred seat” though). Knowing the layout of the plane helps in choosing the best seats in this scenario. Using sites like seat guru can help there.

The other downside to the seats at the front of the cabin is that you have no access to a screen until you hit elevation (it pulls up from your armrest, as does your tray table). But the byproduct here is substantial division between seats. This can be of convenience if you’re next to people who may have otherwise encroached in your space. You also get priority for your baggage in the cabins above – which can be helpful on a full flight, where otherwise they may force you to have the bag sitting under the seat in front of you.

Looking at the quality of the seat itself, fitting a 3-4-3 layout on these planes versus the 3-3-3 on a lot of other 777s seems to make for less width on the seats themselves. But it’s not uncomfortable. Unlike on their domestic services, a pillow and a blanket are waiting for you at your seat (though no amenities like eye mask etc.), and the headrest is movable with side flaps.

So it turned out I had humourously been allocated kosher meals for the flight, by using the phrase “is everything kosher?” in an message when I was checking if my tickets had been properly allocated (hot tip: don’t use that word, it confuses them which is understandable). Thankfully they came up to me before the flight to double check, asking me to open the meals to adhere to the strict religious code around the dishes, and I cancelled the kosher meals at that time – though they did say they might have to give it to me anyway if they didn’t have enough of the regular meals. Hardly the end of the world, but don’t like seeing any food go to waste on account of miscommunication. And thankfully they had plenty of the regular meals in the end.

Given the timing of the flight, the first meal was served quickly. The airline provided two choices – in this case pork with rice or a chicken leg with Cous cous. This came with Asian slaw, bread and butter and a chocolate ganache cake for dessert, with a bottle of water. Drink service wasn’t too far behind, and they have a great selection of alcoholic and non-alcoholic beverages. All this information was provided through the screen rather than in a printed menu. There are snacks available in the galley through the flight and a “light refreshment” is served mid-flight. This was a basic misc. meat and cheese sandwich with cookies. Before landing, fruit, bread and juice is served either with a finger or bacon and scrambled eggs. None of the food was fantastic, but it did the trick – the pork with rice had some great flavour and I particularly enjoyed the bacon and eggs with a hash brown. I stuck it all in the bread roll and made a meal of it…

It was a night flight which meant everyone wanted to go to sleep quickly. And because of the direction of travel it meant you landed pretty late in the day – so it’s a great flight to get if you aren’t able to sleep, and aren’t continuing your journey – because you can pretty much go to bed a few hours after landing and acclimatize quickly.

There were limited announcements to allow you to sleep (though we did have a bit of turbulence, which leads to the seat belt announcement), and flight attendants wouldn’t wake you if you were asleep for your food – but if you left your tray down they’d leave the food there for you for when you woke up. They were also good to ensure everyone put their window shades down in order to aid in people’s sleep. This is something the airline needs to do better on during their trans-continental red eyes – my Vancouver to Toronto night flight had sun barreling in two hours before we landed as they hadn’t asked anyone to close their blinds – and some travellers seem to just be a bit oblivious when it comes to that stuff. Suffice it to say, short haul crews could learn a thing or two from the longer services.

I want to do a particular shout out too for the crew on this flight, who couldn’t have been more helpful or wonderful. It really does make the whole experience all the better.

There’s a universal AC plug under the seat and you can charge with a USB into the screen. Your normal single prong headphones will also work, plugged straight into the screen. They also pass out free headsets at the start of the flight. Screens are in English or French – they don’t specifically cater for the Hong Kong market like other airlines do (including Virgin Australia), though many announcement were in three languages, including Cantonese. The screens were rammed with a tonne of TV shows and movies that were easy to navigate and enjoy. I enjoyed a few uncensored episodes of South Park, before returning to my phone and watching what a LOT of other people on the plane seemed to be watching as well – Stranger Things on Netflix. Wifi was also available in flight for a fee, about C$27 for the whole flight.

No matter whether or not you have a connection, you’ll need to pick up your bags. They make it a very quick and easy process though, and there’s lots of great food and drink options at the airport. It’s also a fantastic atmosphere compared to a lot of other airports; a warm welcome indeed.

So, does Air Canada’s Preferred Seating make a difference? As listed in the piece, there’s a lot of pros and cons to consider in these sorts of seats, and I guess my point is that it’s not black and white. Truth be told, the seats are rarely the best on an aircraft, and aren’t always worth the extra money they cost. So do your research before you book! But being in 50B, I definitely was enjoying one of the best seats in Economy – and certainly the best possible middle seat. Having complete freedom to get up and down and not be bothered is a dream usually reserved for business class passengers. I would absolutely spend the money next time – though maybe hit up 50A instead so I at least can have a few things in the compartment on the wall.

And beyond the quality of the seat, all in all it was a great flight. The staff were fantastic, and food was decent and though they do skip on some inclusions that other airlines offer (like eye masks), and could improve load in procedures (more a fault of the departure airport than the airline itself though), it’s hard to fault the experience.

To book your next journey with Air Canada, head to aircanada.com.

The writer flew at his own expense, though an upgrade to the preferred seat was provided by the airline. All prices are in Australian dollars unless listed otherwise (e.g. Canadian $), and were correct at the time of printing.