America’s Hidden Wonder: Behold one of the world’s most spectacular views, that few have ever seen 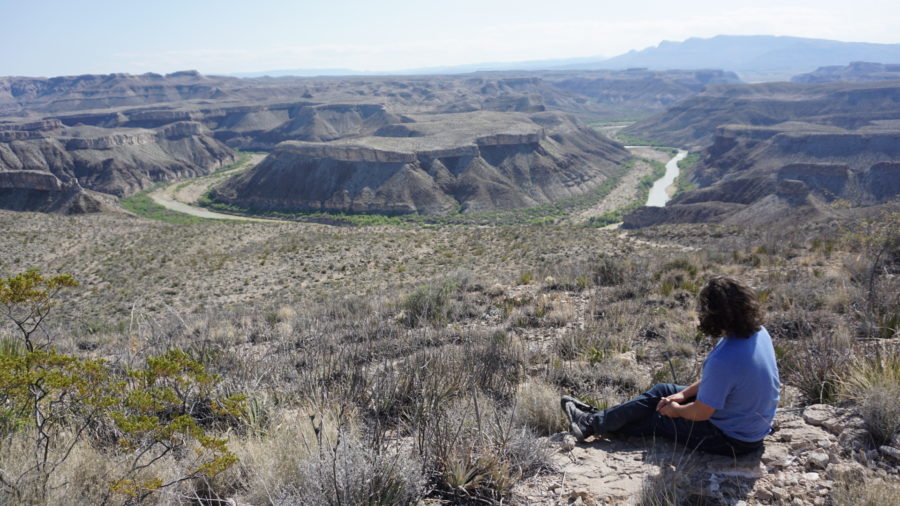 The majestic, diverse countryside of the United States is one that has inspired poetry and prose for generations. And there’s still a sense of wonder to it, whether you’re making your first visit to the Grand Canyon, seeing the Niagara Falls or Old Faithful in Yellowstone National Park. But when these sights were first discovered, there was no one there selling t-shirts and bumper stickers. There wasn’t (as is the case in Niagara Falls) a surprising amount of dinosaur themed attractions surrounding it. And there certainly weren’t thousands of tourists trying to get that “perfect selfie”.

The views may be just as majestic, but there are a hell of a lot of people in the way, and the sense of peace and quiet that once came with that wonder has long gone. But there are still plenty of places in America that don’t suffer the weight of the tourism economy. Secrets that only the locals are supposed to know about, and that writers like myself are supposed to keep to themselves.

This is a story about one of those places.

The journey starts in El Paso, Texas, which sits on the border of Mexico and New Mexico. It’s a vibrant city full of incredible food and great people. We’re heading about four hours southeast along the Mexican border to the Ghost Town of Terlingua, which is your port for the Big Bend National Park, situated around the bending pathways of the Rio Grande – the river that doubles as a border between the US and Mexico. 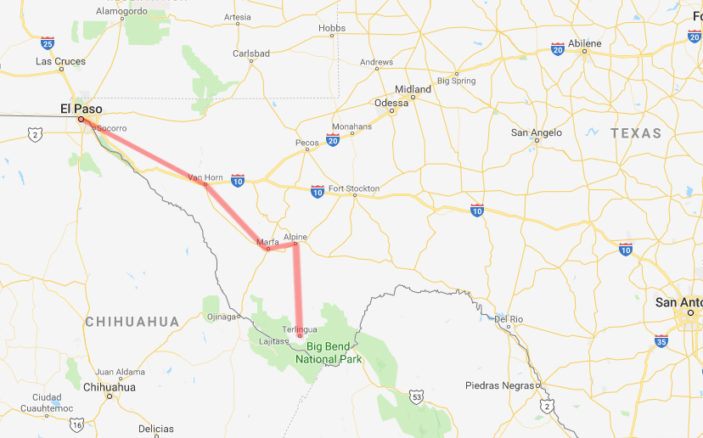 The journey south isn’t a direct one – and there’s a whole lot of nothing between you and your destination. Even with hundreds of millions of people in this country, it’s remarkable how much it can remind of the sparsity of Australia. In a place like Texas – just like at home – you can drive for hours, seeing nothing but desert.

The first town you pass through is a little less than two hours out of El Paso, Van Horn. Here, you can fill up the tank, buy some TNT (but one, get one free!), and not much else. There’s another hour or so of nothing (and a US immigration checkpoint) between Van Horn and the next, slightly more populated city on the route, Marfa. Also be on the look out for a blink-and-you’ll-miss-it art installation called Prada Marfa, just outside of the city of Valentine. 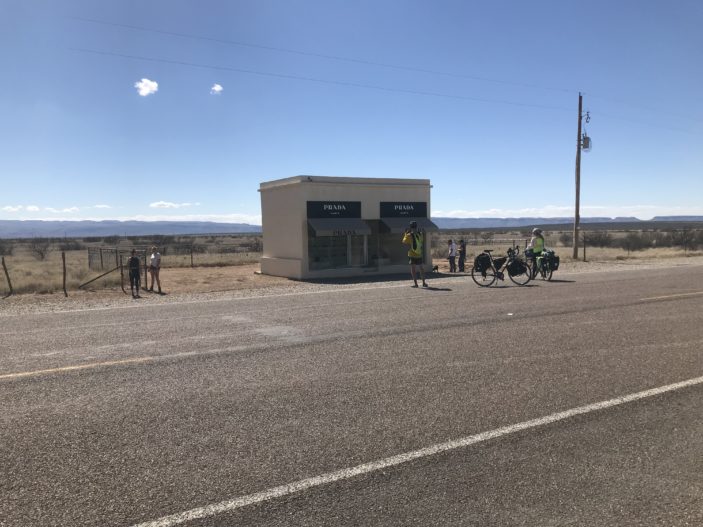 If you’re wondering why this rings a bell, then you must have watched the just-finished, 30th season of The Simpsons, where in the episode “Mad About The Toy”, the family stumbles across the very same installation, that was installed in 2005 by artists Elmgreen and Dragset. And as you can guess from the photo, it’s designed to look like a Prada store – except you can’t go inside, it’s in the middle of nowhere, and they intend for it to degrade back into the soil from whence it came. So who knows? In 15 years it may start to resemble life in the zombie apocalypse… 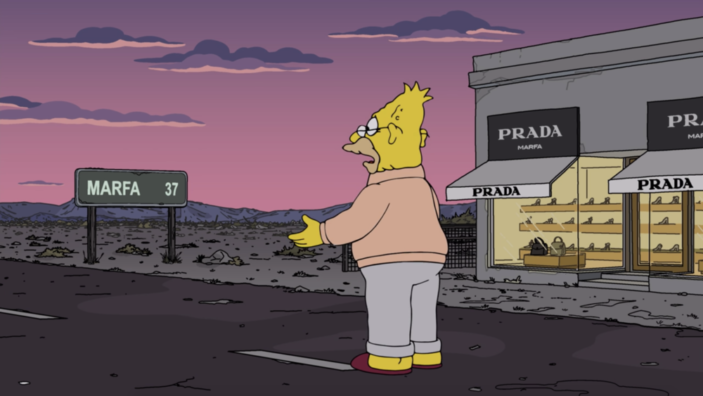 Around here, you’ll need to turn your clocks forward an hour, though you’ll have a chance to get a bite to eat (at the local Dairy Queen), and then 25 miles further in Alpine, where you’ll take the turnoff to Terlingua, you’ll find quite a few more options, and the sort of small town America vibe that all those TV shows try to replicate on the back lot of their studios.

It was another hour and a bit down the 118 (and, again, a whole lotta nothin’ – but some incredible scenery), to finally arrive in Terlingua, and at our motel for the next two nights, the Chisos Mining Co. Motel. Here, you check in at the gift shop, and you’ll find a BBQ food truck – the Rustic Iron BBQ – on site, and a note by the toilet in your room that reminds you that “You are not in the city anymore! You are in the Chihuahuan Desert!” – asking you to use the trash can next to the toilet for all disposals, including toilet paper. You really are in the middle of nowhere out here. 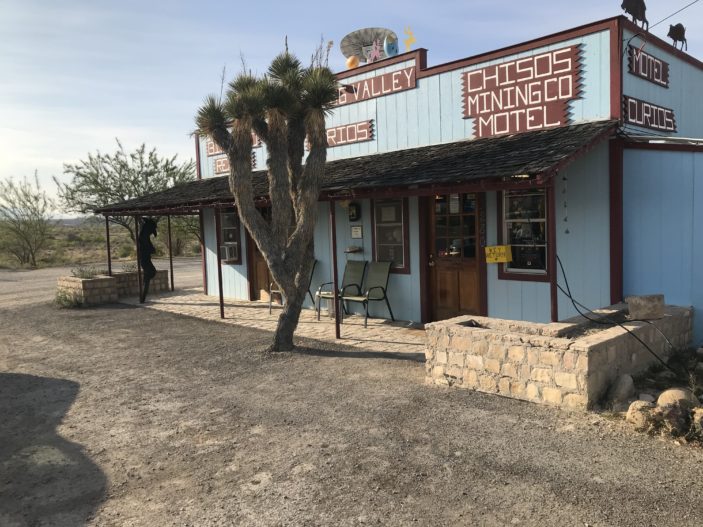 There was a remarkable charm to the motel – and our room, which was a standalone detachable unit that boasted two rooms and two bathrooms, was a comfortable escape inspired by the desert that surrounded it. Just don’t expect wi-fi – you’re not going to get much of a signal out here. But that’s definitely part of the charm. 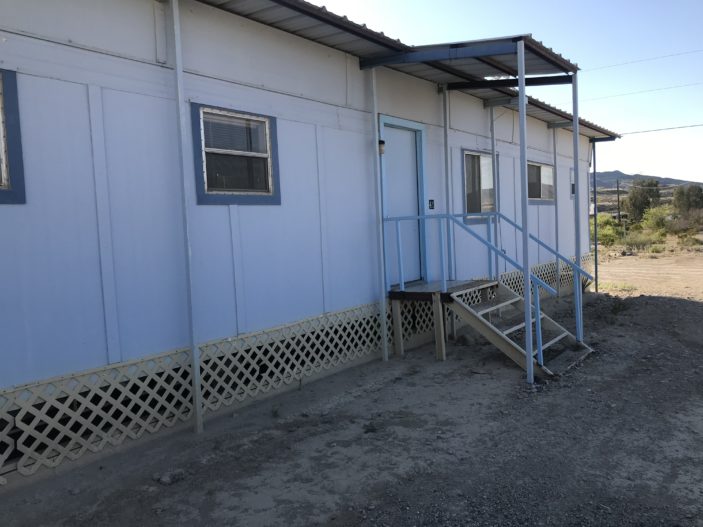 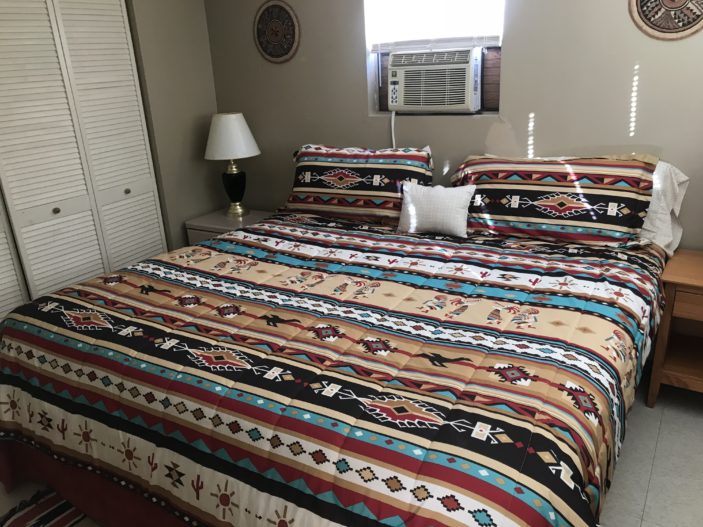 Pretty much next door to the motel was the surprisingly popular restaurant and bar La Kiva. You’ll find some great pizza here to share or enjoy to yourself, and plenty of drinks, with an underground, rustic vibe (think exposed rock and wood throughout the building), and an outdoor patio. They have a stage outside and events like comedy nights, and regular live music. There was a great vibe in the place, and we enjoyed a drink outside while we waited for a table – which, given the popularity of the place, was actually quite a while. 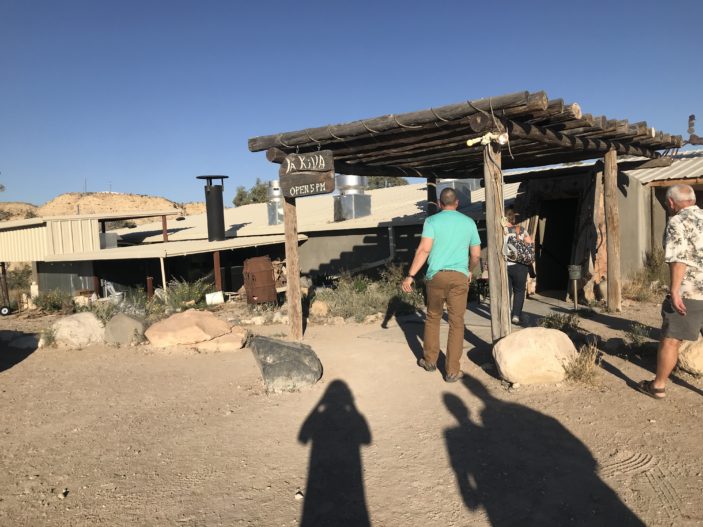 From there, it’s a five minute drive to the Terlingua Ghost Town – a Ghost Town being common in any old mining town in the US – where you can grab a coffee and a bite to eat – with sandwiches, breakfast burritos and more – at the Espresso Y Poco Mas. The Starlight Theatre seems to be the place to eat here, with live music, but a regularly long wait. Instead, you can try the attached cantina for a no frills, outdoor option, or the Taqueria down the road for some incredible al pastor, cooked on the spit with pineapple and served in a taco for $2.50, or in a quesadilla for $6. My mouth is watering just thinking about it. Travel another 15 minutes from here and you’ll make your way to the stunning Lajitas Golf Resort, which sits on the edge of the Big Bend National Park and the Big Bend Ranch State Park, and looks like it’s out of an old western film itself… 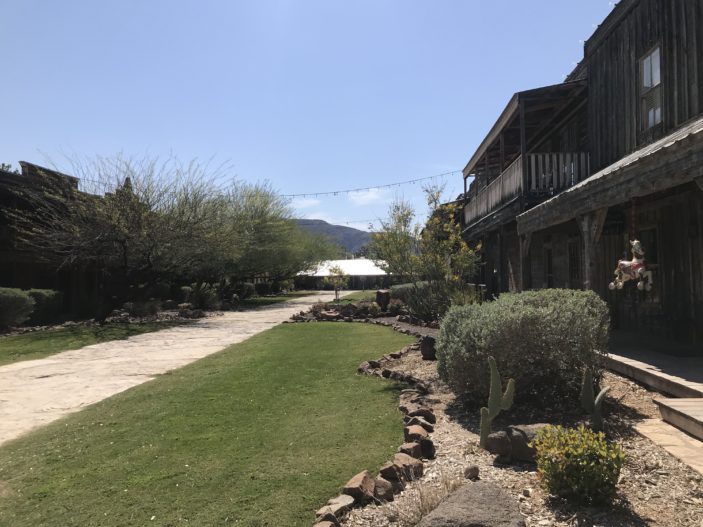 It’s from here you can access the Resort’s nearby ziplining courses, with 8 placed around the nearby terrain. It takes 10 minutes to get to the top of the Quicksilver Course, which is what you want to do if you want the longest and fastest ziplines. Which of course you do. We rode 4 lines, with the longest (“Commanche Revenge”) at 450 meters long, with top speeds of 56 km/h and lasting for about 45 seconds. The fastest line, however, goes up to 80 km/h – on one that’s 428 meters long – and in this case they save the best for last in “Longhorn’s Leap”. The views of the canyons are beautiful as you take on this unique terrain from an equally unique vantage point. 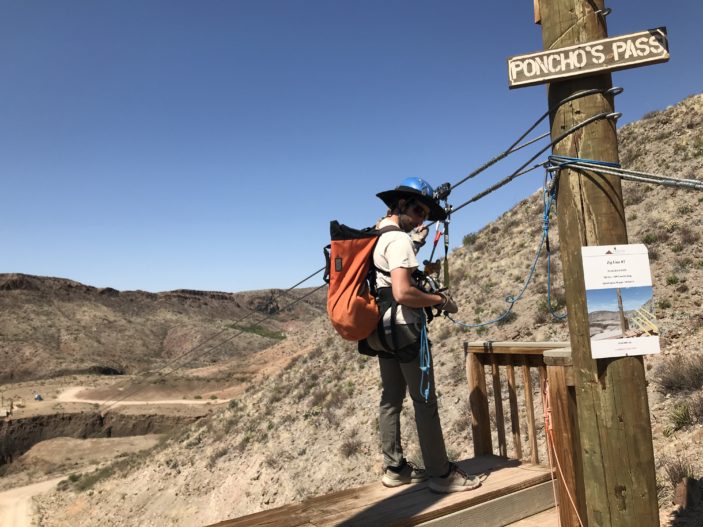 But as incredible as the experience of flying over the desert is, nothing will prepare you for the unencumbered and rarely photographed beauty that awaits you at the peak of the Mesa de Angulia trail. The two and a half kilometre “trail” (which I use loosely), is a rarely trodden path that at some points is nothing but rocks. It’s steep, and though not the most challenging climb out there, is nonetheless one that requires you to a) know where you’re going and b) stop regularly for water. By the time you reach the saddle, you will have climbed 275 metres in elevation from Lajitas, taking you 975 metres above sea level, with the last 183 metres of elevation occurring in the last half mile of the walk. 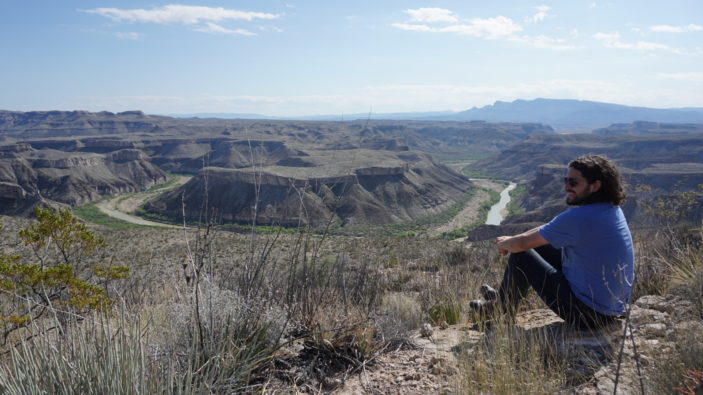 The view, which genuinely appears out of nowhere once you reach the saddle, is something that words can’t describe. The four of us who walked the trail together, had talked the whole way up, pushed through the sweat and the heat, and saw no more than two other people coming down the trail in the entire time it took to get up to the top. There was no one selling t-shirts. There was no dinosaur mini-golf course. We were, for a rare time in that journey, speechless.

These are the views that the explorers wrote about all those years ago; and even in 2019, there was no sense of civilization anywhere. What we were looking at was Mexico, and the Rio Grande weaving its way through the Chihuahuan Desert and the Big Bend National Park. It was a view that no photo will do justice, and no prose or poetry could surely capture – certainly by this writer. But it’s every bit the America I had imagined existed. I just hadn’t quite found it yet.

Being an international dark sky park, it was hard not to want to stay and behold the wonders above us – but we had another two and a half kilometres to get back to the car, and there was no chance we were doing it in the dark. But that experience back at the motel was equally as splendid. With a full moon and no other lights, the night sky was vibrant and bright, with the moon feeling more like a spotlight than a distance floating pile of rocks. Maybe we could have done the hike in the dark after all. The light pollution from the unimpeded moon was a sight to behold in itself; to the point it made the stars less impressive. I can only imagine the sight though of the sky without the full moon. One day I’ll have to come back and see for myself. And you should too.

Just don’t tell anyone about it.

For more about the Zipline courses and the Lajitas Golf Resort, head HERE. For more lodging options, and more information about Big Bend and the surrounding areas, head to the Visit Big Bend website HERE.

Map courtesy of Google Maps, and still from The Simpsons courtesy of FOX. All other photos by the author. And an extra special thank you to Tayler and Krista for driving. Motel and experiences courtesy of Visit Big Bend and the Lajitas Golf Course.