Tech Review: HyperX Alloy FPS RBG Mechanical Keyboard gives you speed and accuracy in the colours of the rainbow

I like the HyperX Alloy FPS range of mechanical keyboards, that much is fairly Well Documented by now. It’s also getting harder to review them because, to be perfectly honest, there isn’t exactly a ton of variation model-to-model. Part of this is that HyperX already make a bloody solid board. It isn’t broke, so there isn’t a clear and present need to fix it. The one thing that always seemed like it was missing from their stripped back, no-nonsense kit was … well, a bit of nonsense, the kind that other gaming peripherals cheerfully deal in. That nonsense has arrived with the HyperX Alloy FPS RBG mechanical keyboard, one of the first HyperX board to embrace the LED shenanigans of makers like Razer and Logitech.

Like the two previous Alloy FPS models, the RGB sports low-key, no-chuffa design with comfortable key placement and switches in three flavours depending on how stiff you like your actuation. Everything remains instantaneous and the board features anti-ghosting to keep from errant double taps that will mess up your Fortnite round.

While the board itself comes in a basic matte black colour, what really lets it blend in are the backlit keys. These previously glowed exclusively in HyperX’s signature red, but can now be changed to any colour or pre-built profile the user desires with its NGenuity software. This functions much the same way Razer’s Synapse app does and takes only a minute or so to set up. 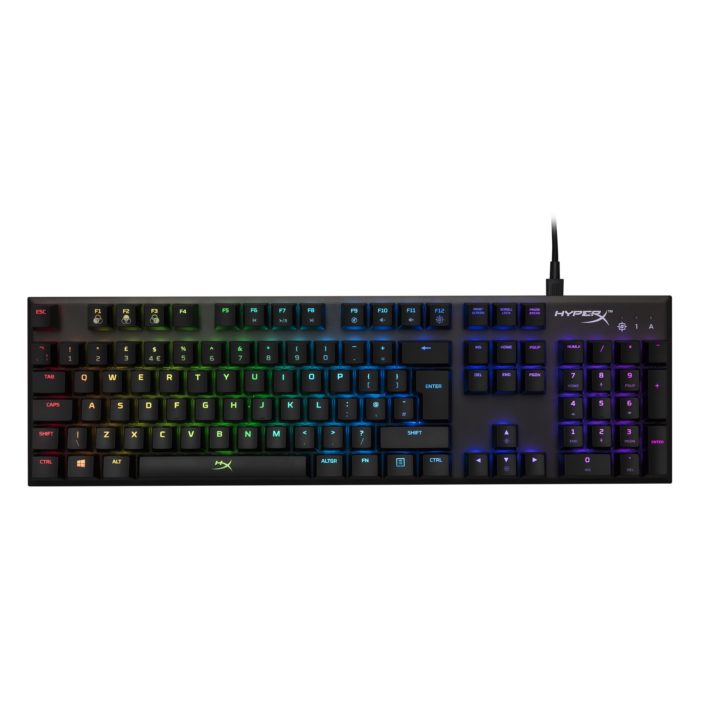 The Alloy FPS RGB still carries the same problem I had with the previous models, which is the lack of any sort of wrist rest. The board’s hard edge forces you to rest your palms on your desktop and it can lead to discomfort after longer playing sessions. It certainly doesn’t make it very comfortable to type on — not that you’d want to be doing a lot of typing on a mechanical board anyway, the keys are quite high up and the noise of their clacking would drive your housemates or co-workers crazy. Trust me on that last one, I know from experience. That said, it can be made to work if you have a soft enough mouse pad or a second keyboard for writing (which has been my solution). For now, my plaintive cry to HyperX continues: just add a damn wrist rest.

The Hyper X Alloy FPS RGB is a solid keyboard with one specific bell-and-whistle many have simply come to expect in a PC gaming peripheral. It still doesn’t have any truck with the more outlandish features of its direct competition, and that’s still one of my favourite things about it. I like that it’s comfortable being what it is, and what it is is mostly great. I look forward to seeing what, if any, changes HyperX implements in 2019.

Highlights: Simple design; Solid build; RGB lighting is very nice
Lowlights: With the exception of the backlights, it is exactly the same as its sibling models; No wrist rest
Manufacturer: HyperX
Price: $159 AUD
Available: Now

Review conducted with a retail model provided by the manufacturer.