Every now and again Bang & Olufsen reach back into their ever-growing catalogue of high-end audio devices and iterate on what they’re most renowned for: design.

Aesthetics in tech has always been hovering over the industry, but it’s only within the past few years that a sharp focus on exquisite looks has really shifted into the spotlight. Performance is always a concern, of course, but never before has there been such a want for devices that don’t just sound great, but slot seamlessly into modern design trends. This apex of tech and design is where B&O sits most comfortably, and it clearly shows with their most recent redesigns.

Both the Beoplay A1 Bluetooth speaker and Beoplay E8 Bluetooth earphones were recoloured, reimagined and rereleased out into the world earlier this year, with one particular stunning colour scehem that should instantly turn heads. That’s the “Late Night Blue”, the subject of this piece, said to be inspired by “jazz, music clubs and the flashing neon signs of the backstreets of New York”. 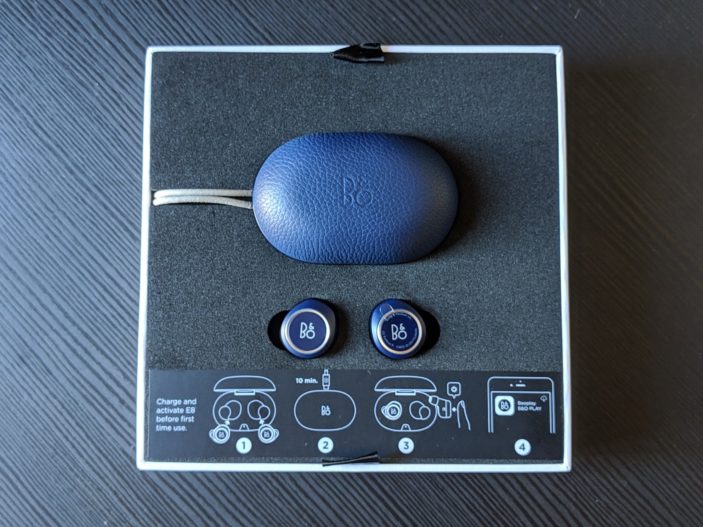 I guess that story sticks. An immediate thought is the legendary Blue Note jazz club in NYC; though I’m not sure where the neon signs come into play. The dark, seductive blue that saturates the beautiful slim form of these earphones, perfectly in-line with B&O’s well-known love of monochrome and minimalism, extends to both the plastic and aluminium earphones themselves, and the sleek clamshell leather charging case that comes with them.

The Danish company’s intimate understanding of design-forward products and just how valuable aesthetics to consumer tech wouldn’t mean much without performance though. Of course, you’re going to expect something damn good for the price tag of a Bang & Olufsen product, and E8 certainly does not disappoint. 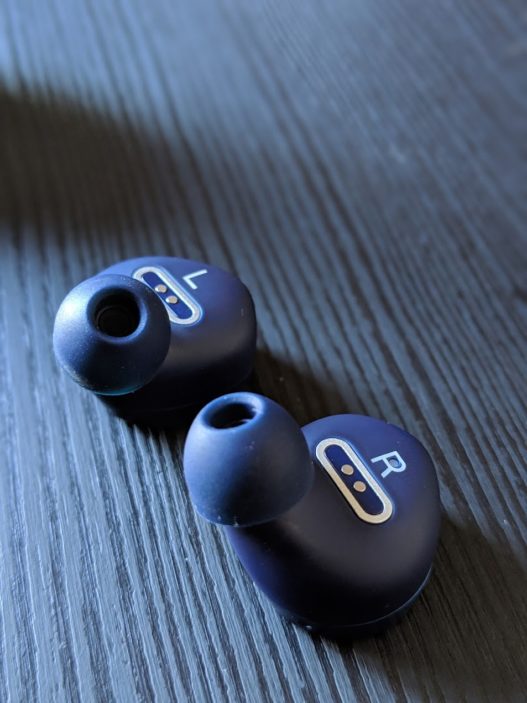 As far as actual performance goes, you’d be hard-pressed finding true wireless earphones that sound better than these. The profile can sound muffled if you haven’t plugged on the right ear tips (the device comes with different sized silicon tips, thankfully) and found the perfect fit, but when you do hit the mark you’ll be rewarded with an impeccably clean, nuanced sound that captures plenty of weight and texture no matter the genre.

Hip hop sounds amazing on these things, as do other styles of music that rely on different drum patterns. I’m usually left slightly disappointed by vocals on other Bluetooth earphones, but the sound here is just too crisp and clear to have any concerns. Of course, you’ll need to play around with the EQ settings in the B&O’s dedicated “Beoplay” smartphone app to adapt it to other styles, but just the default is resoundingly excellent.

The two earbuds use near-field magnetic induction to work with each other, and the added tech certainly helps nudge the E8 above competitors at lower price points. You won’t get an unbalanced sound from either earphone, and the perfect interplay between both is one of the most consistent and distinctive aspects of this device’s performance. 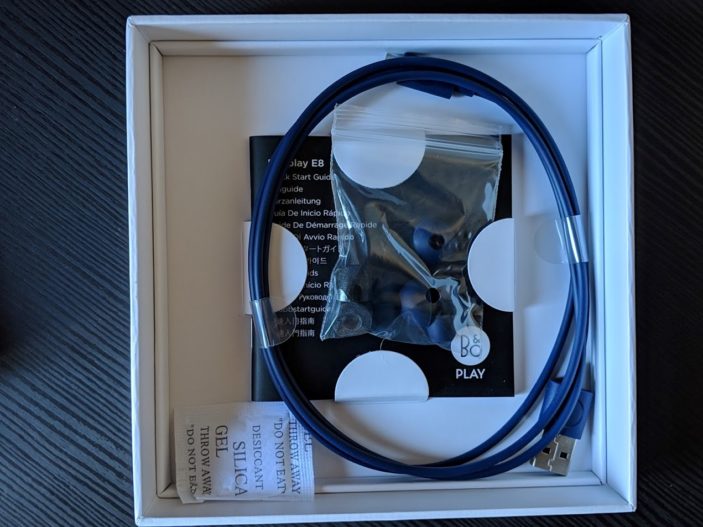 The EQ on the app could use improvement. Warm, excited, relaxed and bright are the tonal pillars you choose from in a gradient, and while the extent of sound customisation is nowhere near the worst, requiring you to simply drag a circle around to find the right profile, a richer bank of options would have been appreciated.

Four hours of play time in one charge sounds about right. I’ve never found Bang & Olufsen to be dishonest when it comes to their battery life, and even if they were, a disappointingly standard four hours is nothing to boast about. Fortunately, and as with most Bluetooth earphones worth their salt in the market today, the case itself acts as a portable charger and holds enough for two more charges to the earphones. That triples the daily life of the E8 to 12 hours, which is more than enough for lifestyle earbuds before you have to recharge the case via Micro-USB. 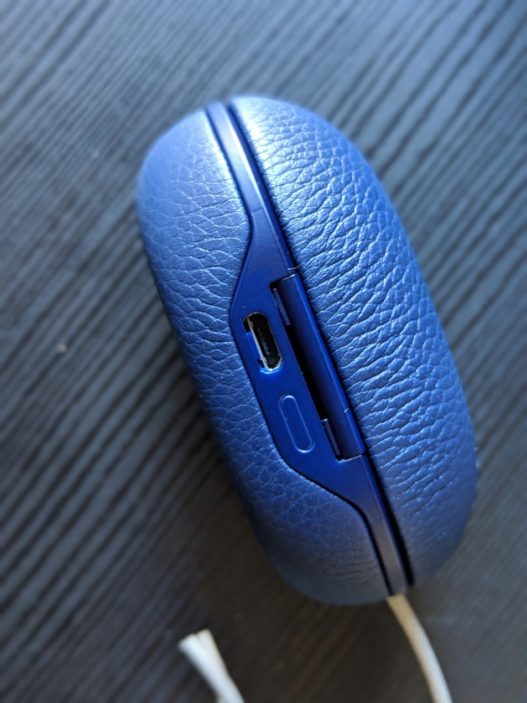 My biggest issue with the E8 is just how damn sensitive the touchpads on the earphones themselves are. The buds use ultra-sensitive touch to control the music and take calls without needing to pick up any connected device. It’s useful, and now expected from these devices, but the sensitivity can present with issues if you’re adjusting either bud, especially the right.

The right is where the majority of controls lie. Tap once to pause/play, double tap to skip track, and hold to increase volume. Meanwhile on the left, you can double-tap to rewind, and hold to lower volume. I’ve lost count of the amount of times I went to adjust the right earphone back into place only to suddenly have my music stop. 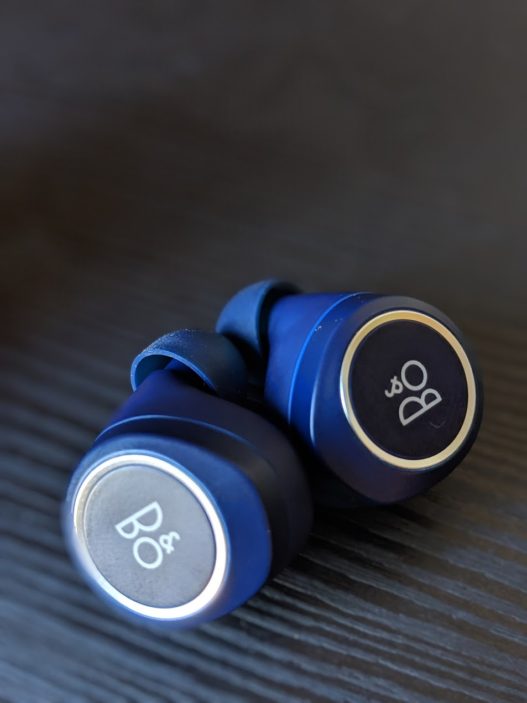 Unlike the excellent Sony WF-1000X earphones, trendy noise cancellation isn’t a focus for the E8. Instead there’s a nifty “transparency” mode which you can toggle by tapping the left bud once, allowing outside ambient noises to come through under the music to help with situational awareness. You can further adjust the level of “transparency” in the Beoplay app, which is definitely a nice touch.

Connection via the app is unfortunately very inconsistent. Of course, you don’t even need to use the thing as holding both earbuds gently and a quick Bluetooth connection is enough to get you going. However, it would have been nice to have everything in working order considering the E8 is such a big investment.