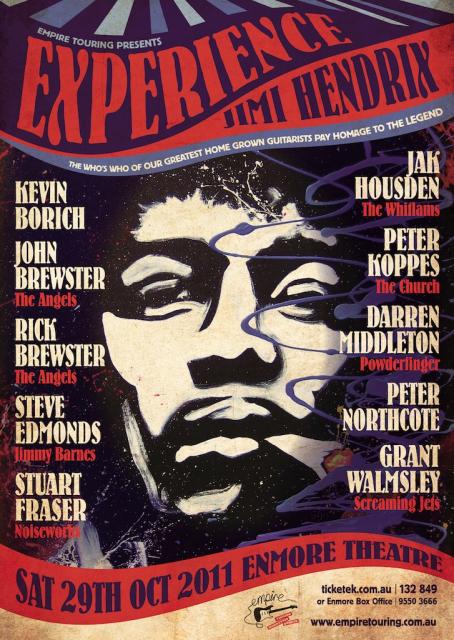 The 2011 edition of the Experience Jimi Hendrix concert presented by Empire Touring will return to the Enmore Theatre on October 29 with another all-star lineup of Australian musical greats who will pay homage to the genius of Jimi Hendrix.

Last year’s show at the Enmore Theatre was a virtual sell-out and proved massively popular with fans and critics alike who raved about the show proving again how persuasive Hendrix’s influence still is 41 years after his passing. The 3-hour show is a tribute to the iconic artist’s songs, showmanship and trailblazing technique and that Hendrix’s music is still very much alive and well.

The audience that attended the show, with fans ranging from teens to baby boomers, were blown away by these guitar players performing their renditions of these Hendrix classics including All Along the Watchtower, Fire, Hey Joe, Foxy Lady, Wind Cries Mary, Castles Made of Sand, Purple Haze and Voodoo Chile. And 2011 will be no different.

To make the evening that much more memorable, there will be two almighty jam sessions at the end of each set performed by various combinations of our featured musicians.

“Invited to a night of playing Hendrix songs? At the Enmore? Why wouldn’t I be involved in this, sounds like a blast. I can’t wait to wrap my fingers round a couple of his tunes.” Darren Middleton, Powderfinger.

“I’m really looking forward to playing Experience Jimi Hendrix again because the chance to play Jimi’s material is always so much of a BLAST! The Crowds keep comin! – He was and still is THE MAN – The complete Artist!” – Kevin Borich.

This is going to be a live concert experience but with a unique interpretation of the music by some of our own guitar greats. With a line up like this, and songs that have influenced generations of music lovers the world over, be prepared to experience all of the greatest Jimi Hendrix moments, Live, once again…. and for one night only.