Emerging Melbourne alternative-pop artist Max Lawrence has been gigging around town for a few years now and it was his performance at the 2019 Gaytimes Festival which led to a collaboration with Evan J Lawson and the Forest Collective orchestra for the Midsumma Festival. Forest Collective is a not for profit arts organisation focusing on contemporary classical music. It was formed in 2009 by Evan J Lawson, and has since had a run of concerts sell out, continuing to showcase an immense array of like-minded musicians. Midsumma Festival is arguably Australia’s premier queer arts and cultural festival.

Lawrence’s music embodies a true spirit who writes music to find his place in the world. His songs were born from a place of intimate self-reflection and they are ultimately what inspires him to keep living and writing. Lawrence’s debut EP, Chlorophyll, was released in 2019 and through his live gigs and online support, Chlorophyll has reached the hearts of many a music connoisseur. This EP forms a conceptual song cycle exploring the process of spiritual and emotional healing whilst reflecting and growing from pain, apathy and depression.

The show takes place at the stunning Abbotsford Convent just out of Melbourne city. As we take our seats the orchestra are getting their instruments ready and before we know it Lawson is up conducting. Max Lawrence oozes passion in his lyrics and lifts the room with his stunning vocal range enveloping the show with the amazing Forest Collective Orchestra. 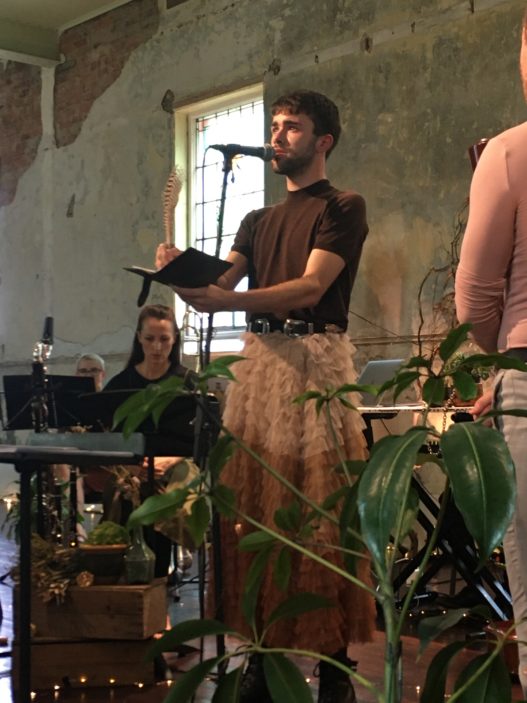 Today, I can feel a creative and special presence in the room. The crowd is enthusiastic yet humble of Lawrence’s performance and we’re all in awe of the talented musicians performing in the orchestra, bringing Chlorophyll to an elevated level of appreciation. There were some interesting moments during the song Remedy where Max and Samantha (harpist) use their rings to play up and down the bass strings of the harp to create an unusual sound. There were many moments where different instruments were played, even pieces of paper made a musical appearance in the convents oratory room.

Twelve songs were performed today, including two covers, and the audience was captivated throughout. You could feel the crowd was engaged in the music and relaxing in the connectedness of the musicians whilst absorbing the ambience in the room.

Lawrence is an artist to be aware of and if you’re lucky enough to get to a show, you won’t be disappointed. If you enjoy Moses Sumney, Perfume Genius, David Bowie, Bjork or Jeff Buckley – then you’ll love the music from Max Lawrence.