Live Review: Gang of Youths put on a mesmerising show at Enmore Theatre as their huge tour comes to an end

Gang of Youths‘ epic stories of victory, tragedy and hope have been bringing young Australians a new appreciation of classic feelsy rock. The charisma, insightfulness and passion of lead singer Dave Le’aupepe has been at the front of most of this success, rendering comparisons to legends Bruce Springsteen and Michael Hutchence.

I saw Gang of Youths perform at Sydney City Limits earlier this year, after three tracks off their timeless album Go Father In Lightness made it in to the Top 10 of Triple J’s Hottest 100. Despite getting this well rounded success I was bewildered at how the crowd didn’t seem to be relishing this moment, seeing what is arguably the best Australian band of our time. Whether it was simply the daylight time slot or another factor, I knew that their most recent sold out ‘Say Yes To Life’ tour, including six shows at Sydney’s Enmore Theatre was going to be spectacular.

We headed along to the fifth Enmore show and second last show of the tour. I’m sure by this point they were probably looking forward to finishing this huge run of shows, especially after front man Dave Le’aupepe had suffered through a chest infection, causing them to reschedule one show until January 31st.

Long time friend of the band Charlie Collins opened the night with her warm narrative indie pop. Only having two songs released on Spotify, it wasn’t a huge sing along set but had a heap of people were transfixed by her, with newest track “Mexico” a stand out. Im sure she would have picked up a heap of new fans on the back of this tour and so hopefully she has some new songs on the ready.

As Gang of Youths‘ took the stage it was like the entire room inhaled and exhaled simultaneously, a real sense of anticipation and awe that I haven’t felt at a gig for a long time. The first half of the set followed almost identically the order of Go Father In Lightness, converting the perfectly crafted album structure in to a life show which evoked the same emotional response. Opener “Fear and Trembling” was the perfect build for “What Can I Do If the Fire Goes Out.” The three opening drum beats pulsated through the room, offering up a hilarious moment where suddenly the entire room thinks they are professional air drummers, playing alongside drummer Donnie Borzestowski. The fast paced and invigorating guitars, keys and drums got the whole room dancing and it’s clear this is a track that was born to be played live.

Notorious for my overly excited and terrible gig dancing, listening to “Keep Me In The Open” and “Do Not Let Your Spirit Wane” was one of the first times I’ve just stood paralysed at a concert, watching the stage open mouthed. These orchestrated and embellished tracks have a comforting aura and pair nicely together.  “Do Not Let Your Spirt Wane” is about a recurring vivid nightmare Dave had. This precision and reminiscice translates in to the song, creating a real fullness to the track.

Dave Le’aupepe took a seat at his piano, and the crowd instantly knew we were about to hear title track “Go Father In Lightness,” which comes in at only 1 minute and 48 seconds, but is always a crowd favourite.

Before beginning the next tracks Dave explained the traumatic story behind “Persevere”, where his best friend lost his baby and the strength of the family during that time. When I first heard the meaning behind the track and then listened to the song again it felt like I was listening to song for the first time again, so I was thrilled that Dave decided to share it. However, nothing in the world of Dave Le’aupepe is short and to the point and with a huge catalogue of hits we would love to see, this went on for a bit too long. This somber but powerful number lead in to a noticeable second section of the set, a huge lift in energy, which was packed with all of the bands biggest hits.

“The Heart Is A Muscle” was vibrant and larger than life and the first look at Dave’s dance moves. “Le Symbolique” is the second instrumental track on Go Father In Lightness, which has the best possible build and transition in to “Let Me Down Easy.” If you haven’t listened to these two tracks sequentially then do yourself a favour! They didn’t play “Le Symbolique” but instead took the time to still build in to “Let Me Down Easy”, with Dave controlling the crowd – making everyone clap and then silencing us. This to me seemed like a weird choice that goes against Dave’s typically earnest and non-commercial attitude to life and also an unnecessary replacement to the unbeatable “Le Symbolique”. 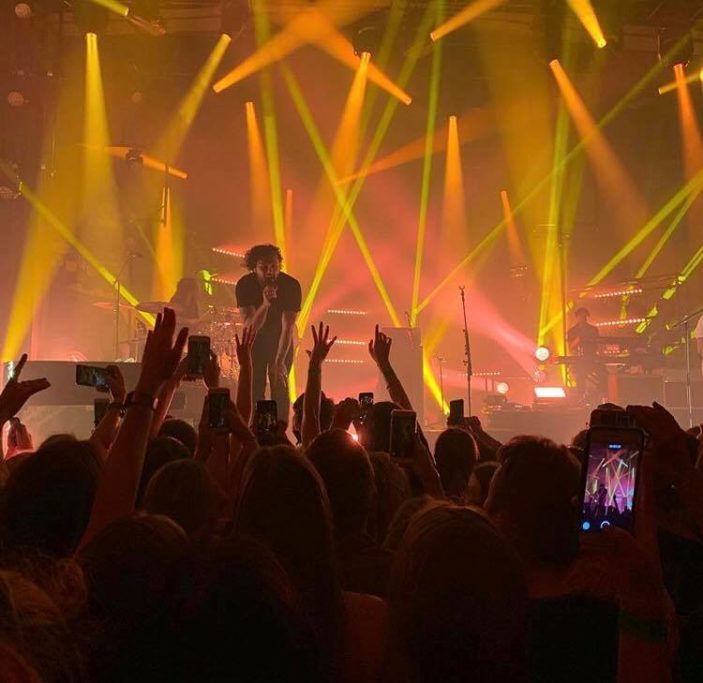 As expected “Let Me Down Easy” went down a treat, with Dave encouraging everyone to dance (like the infectious beat wouldn’t make you do it anyway!) An atmospheric light show and Dave’s iconic body rolls and shimmying sent the crowd in to mayhem.

Up next was the first track off an album other than Go Father In Lightness, fan favourite ‘Magnolia.” Despite the success of the most recent album it warms my heart to see “Magnolia” still getting the greatest crowd reaction of all their songs. The momentous and uniting track comes from dark roots. “Magnolia” tells Dave’s story of almost ending his life in June 2014 and then sitting under his Dad’s Magnolia tree, which has become a motif in a lot of Gang of Youth’s songs. Dancing with aggressive and adoring fans and crowd surfing, Dave remains a true professional performer and didn’t lose breath or muck up a single note while being flung around the room. This timeless classic has acted as the contextual base of Gang of Youths and the passion and liveliness behind the song is addictive and unforgettable.

The last song of the main set was “The Deepest Sighs, the Frankest Shadows” a heart wrenching and cinematic ballad. The energy that built from the last three tracks transferred straight through and the crowd was crying out lyrics as if it was a relatable story about their life. The whole room felt connected and was absolutely buzzing, which is true credit to the sensory experience Gang of Youths can manufacture. Putting these last four songs back to back and having the whole crowd embracing each care free moment was simply remarkable and demonstrated why people keep falling in love with Gang Of Youths. In the least cheesy way possible this section of the show was a huge celebration of life and all it has to offer.

As heart rates settled and the “wow” of what just happened set in, we waited patiently as the band failed to convince anyone that the show was actually over. The band got the applause they deserved and returned to the stage for the encore to play ‘Still Unbeaten Life” and the seven and a half minute long track “Vital Signs.” Although it was good to hear some stuff off the earlier albums, these felt like time fillers.  Although these songs are fabulous on the records, they just weren’t right for the set. Personally, I felt hits like “Strange Diseases” (which made a brief appearance on this tour) or “Sjamboksa” would have worked well for keeping the crowd involved in the encore.

This small lull was quickly resurrected as the song the tour was named after “Say Yes To Life” burst into our ears. This song was destined to close off a phenomenal show, and is the most underrated Gang of Youths song and my all time favourite song of any artist. The percussive emphasis on “Say Yes To Life” and soaring lyrics create for a colossal explosion of euphoria and joy. The huge mantra behind the lyrics is matched by the quintessential Gang of Youths epic instrumentals and had the whole crowd in a daze. The track takes over three minutes to really climax, and at this point confetti cannons explode and falling confetti drifts to the ground as the last two minutes of driving guitars thrashing drums and piercing violins whisk us away in the passionate world that Gang Of Youths create. A life changing song for many, “Say Yes To Life” is the perfect end to a perfect album and perfect performance.

With such a long tour, some songs that were played early on like the bold and ambitious “Atlas Drowned” or their cover of Bruce Springsteen’s “I’m On Fire” weren’t played this time around, which would have been fabulous. But, if you weren’t aware of these missing you would not have felt at all like the set was lacking.

From seeing how much the live performance of Gang of Youth’s has changed in less than a year and the international success they are now achieving, there has never been a better time to see them live. People have suggested so many things for the band to further add to the spectacle of the show. Playing with a full orchestra is something I hope happens sometime in the future, which would perhaps be the most captivating and mesmerising show of all time.

Dave Le’aupepe has said he is not a prolific writer and writes from inspiration which lead me to regretfully accept that Go Father In Lightness would be the last we hear of Gang Of Youths for at least a few years. However, just recently in an interview with Zane Lowe, Dave let slip that they are planning to finish the next Gang Of Youths record by the end of 2019! Whether anything can live up to the beauty of Go Father In Lightness, we will have to wait and see.

True performers and a perfectly in sync group, despite me and the rest of the world focusing on Dave Le’aupepe’s charisma, a shoutout needs to go to the rest of the band Max Dunn, Jung Kim, Joji Malani and Donnie Borzestowski who play their roles in the band perfectly.

There is only one more chance to see Gang of Youths play in Australia for a while, and that is at Laneway Festival in the New Year. For more information click HERE.