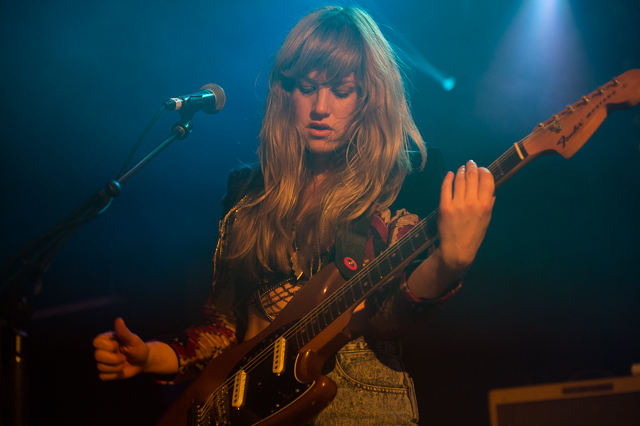 The structure of “support-support-headliner” is a common one, so it’s rare for it to produce a well-balanced line up. But Steve Smyth, Gung Ho, and headliners Deap Vally are each as talented as they are stylistically diverse; making their recent show at Oxford Art Factory an unusual delight.

First up was solo rocker Steve Smyth, accompanied by his brother-in-law on drums. Musically, the best description I have for his sound is ‘muddy folk’, as the potential fragility of his songs has been noticeably scuffed up by some rock influences. The same grit is also present in his voice, with his powerful vocals ranging from a bellow to a growl; charged by emotion and textured with an idiosyncratic slur that made articulation utterly irrelevant. This was encapsulated in his performance of “A Hopeless Feminist”, which saw the audience reduced to silence. At the close of his set, the audience begged for — and was indulged with — an encore, before he stepped off stage just as quietly as he’d arrived.

Gung Ho were next on stage, bringing with them the sunniest set of the night. Their songs flirt the line between dance and a dreamier pop; that is, bouncy enough to satisfy the dancers in the crowd, but intricate enough to engage the quieter members of the audience, as best seen in the song “Autumn”. I was particularly impressed with the bass, which weaved playfully through the catchy guitar riffs and measured drumming, and avoided settling into any droll mimicry of its louder counterparts. Yet for all the obvious talent the band had, they appeared shy, and reluctant to speak to the crowd. With a little more confidence to round out their performance, I can see them becoming a well-known name in the indie-pop circles.

At 10:30pm, Deap Vally stepped out onto a smoke-filled stage to face their first-ever Sydney crowd. As a result of this, both the rockers and the audience appeared somewhat hesitant to fully engage, what with neither of them knowing what to expect from the other. But it only took a few songs for the band to win over the crowd, and they soon established a steady rapport and a mosh pit. What really held the show together was the playing of the band’s singles, including the gritty “Lies”, ‘capitalist anthem’ “Make My Own Money”, and closing song “End of The World”. As it was these songs that clearly drew the crowds in the first place, they were the undeniable highlights of the night.

On paper, folk, indie-pop, and grunge don’t appear to be the ideal recipe for a successful gig. But in this case, the differences in sound served to accentuate each artist’s strengths, rather than pander to a particular interest. And by the audience’s reactions throughout the night, I’d say I’m not the only one who appreciated the variety that Deap Vally, Gung Ho, and Steve Smyth offered.

Photo Credit to Johnny Au.
View the rest of the gallery here: https://www.theaureview.com/photos/deap-vally-gung-ho-steve-smyth-oxford-art-factory-05-04-13