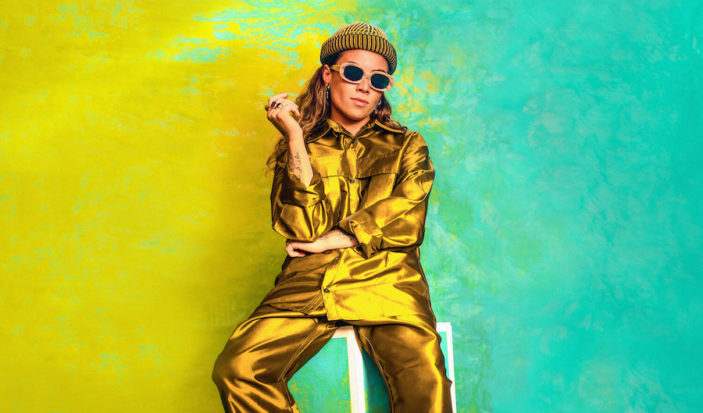 Tash Sultana is set to perform on MTV Unplugged Melbourne on May 4th, following in the footsteps of some of Australia’s greatest artists.

Joining the ranks alongside Amy Shark, DMA’s, Gang of Youths and Courtney Barnett, Tash gearing up for their first performance of their Terra Firma chapter, teasing that the performance will be littered with surprises.

Tash, who is gender-fluid and goes by they/them pronouns, released their second studio album Terra Firma in February this year after collaborating with the likes of Matt Corby, Josh Cashman and Jerome Farah. With only a few small gigs to mark its release, they’re gearing up for the celebration the album deserves.

We caught up with Tash to chat about Terra Firma, what’s in store for Unplugged, the feelings of invincibility and validation, as well as their new found love of collaboration.

How’s life been feeling since the release of Terra Firma?

Pretty fucking cruisy, to be honest. Like I’ve done some shit behind the scenes and stuff like that. But, I’m just really craving like an actual real gig… Usually, you release an album, you go on tour for a couple of years and yeah, I just been watching the grass grow in the backyard.

Uh, well, I was, but, uh, that garden’s fading now. It’s looking pretty f**king barren and dead at the moment because I just don’t have the time for it. But I f**king grew some ridiculous zucchinis for a bit.

All right, what’s the stuff going on behind the scenes then?

Um, where did it begin? I can’t let on too much of that information because a lot of it is a surprise. A lot of it will actually be seen for the first time for MTV Unplugged, specifically saved it for this. And I’ve just been working with other acts, other artists. I got a couple of collabs that’ll come out later in the year. Some pretty huge US artists and stuff like that and producing for a couple of other Australian acts. Writing songs with them, for them and all that type of stuff. Chilling, just cruising through.

That’s interesting because I wanted to ask you about that. Obviously with Terra Firma, you kind of opened yourself up to collaboration. How has that been relinquishing some control in that sense?

I mean, I’m always in control of me. So therefore I take myself where I’d like to go, you know what I mean? I do what I want to do and I try to have my hands across pretty much everything that I can which is great, because I’m super organised. But it’s cool. I think the best way to open up if you’re stuck is to f**king jam with a couple of other motherf**kers.

Well, “Pretty Lady” is the perfect example is that.

I mean, “Pretty Lady” I wrote six years ago. I was just stuck. I just didn’t think I was going to ever release it. So it was kind of a nudge. It’s kind of like the nudge of approval that I was seeking from somebody from all these years ago.

Interesting. Did you find that last year in particular, because obviously prior to the pandemic you had like a super packed touring schedule… Did you lose a sense of validation or approval in your craft when that all stopped? Or did you still find that in sitting down and having an uninterrupted time to write? Do you find a live audience gives you some sort of sense of validation or did you still get that?

So, I think of things to do in dimensions, if that makes sense. So like Tash Sultana to you and others, but Taj only a few people get to see. So, I only share 10% of myself through Tash Sultana to the world and the rest is all… you’ll never know. And I have defined validation as the personal person that I am as Taj. And that was just by stopping, so when you’re like stripped bare of everything that you think that you know, you kind of have to relearn how to live again. And that’s what I did, and I feel really good. Like I feel really, really good. I just grew up in this time and, um, I feel like I know what’s up.

That’s so good to hear because I personally struggle with that. I tie a lot of my sense of achievement to work, which is so detrimental.

You tie your achievement only to work?

Not only, but it’s one of those… it’s a silo that I’m like, “Oh God, I need to get out of that.” Was it a long process or was it sort of like a sudden realisation that you needed to separate yourself?

I love that. That’s very true. Run your own race.

Don’t fucking compete with other people. Absolutely. If you wanted to do that, go fucking play sport.

Do you play sport? You surf?

Let’s talk about the setlist for Unplugged – what’s the split between Flow State and Terra Firma because I am conscious that you wouldn’t have had a good chance to play the new album yet.

I haven’t had a chance to play the new album, that’s correct. Because every time I go to do it, it gets cancelled.

Or you get laryngitis!

Well, I mean, that wasn’t really Terra Firma. That was kind of closing Flow State. And I did get laryngitis, which was f**ked. And then I’ve done a couple of small little shows this year, just for like release week and all that and that was so cool. That was just small little 500 cap shows because that’s like all you could do, but they were sick.

And the setlist… it’s a good split. It’s just split across Notion, Flow State and Terra Firma. So there’s a little bit of everything in there, but it’s more so Terra Firma-focused because obviously that’s where I’ve gotten to as an artist, plus the hits from the past or some of. You’ll see. I have carefully crafted this set.

This sounds like there could be some epic surprises in there.

I think there will be a big surprise for the world for this one.

Are you bringing any friends along for the set?

You’ve also been experimenting with a band format. Is that picking back up again, obviously Perth’s not doing so well but is that something on the card for the future?

You’ll see! The thing is, I don’t like to say it because every time I say anything, COVID happens, so that changes the plan. So I’ll just say you’ll see.

Another thing I wanted to ask you about, seeing is we don’t get much chance to chat about your album. You’ve said in the past that it is a reminder that we’re human at the end of the day. Have you ever had a moment of invincibility throughout your career?

I think that when you’re… I call it small artist syndrome. It’s just something that’s known that you kind of experience and then you see happening to others. It’s when a small band gets a bit of a leg up and they get cocky. And they don’t realise that this is a really small knit community in the music industry and that you can’t just be an asshole without having some sort of repercussion and getting back around. And it doesn’t mean that any of that was really that bad. You know what I mean? It’s just a learning curve that people go through when they get a little bit of success, how it is going to affect you. It generally effects the people around you more than it affects you, but they feed you the bullshit. So sometimes stepping back is really good to see what’s up.

Was there a time where you really needed to curate who you spent time with outside of this project?

I’m a loner. Full blown loner. You won’t see me hanging out with motherfuckers because I’m alone, chilling.

Okay, so afterparties for your shows, are you the type to smoke bomb?

I won’t be there (laughs). I’ll be having conversations with the moon somewhere, I reckon.

That’s a great imagery. What else is coming up in your world then?

Well, I’ve got acupuncture in a half an hour. I’ll start with that and then get into my studio and begin again. I just jam, that’s it. You know, I haven’t even seen any of my friends in such a long time, I’ve just been a really solo person. And I like that because I feel really sensitive to other people’s shit. So, I kind of just like to just chill and jam, keep it right.

Have you always realised that you take on other people’s shit or was that also something you had to come to?

I just think that’s an age thing. If you develop empathy as an adult.

Fair enough. Tash it was so lovely to speak to you and I’m super curious about these explosive surprises you’ve got in store.

Tash Sultana will be performing for MTV Unplugged Melbourne concert series on May 4th at Chapel off Chapel.

Broadcast times are yet to be advised.