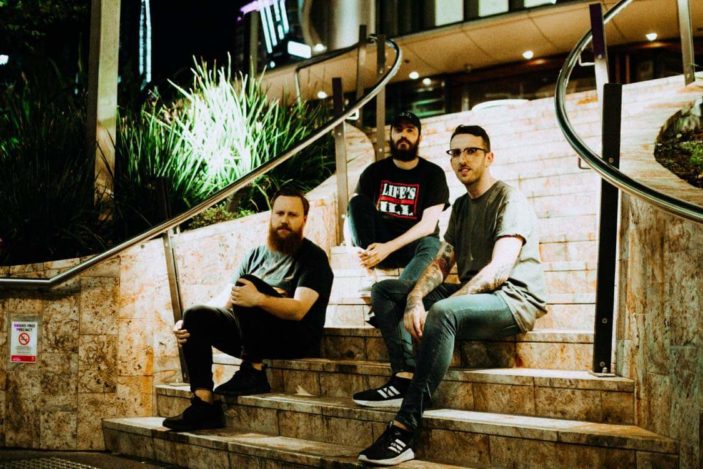 Brisbane experimental post-hardcore trio Nervous Light are ready to take on 2022 with their hearts on their sleeves and eyes on the prize. The emo punk lads released their awaited debut EP, Bury What’s Left of My Heart in Your Backyard, independently on 4 February. If the title alone wasn’t enough to pull you in, we caught up with the boys to chat about the EP, how it came together and where to go from here.

“Ironically, I find it’s not about standing out from the crowd as much as it is doing what we genuinely want, going with the flow and serving the songs rather than aiming for a particular sound,” explains bassist and harsh vocalist Rich when asked about the title of the EP and blending of styles. “What ties it together is more so the skills Jake, our producer, has to make sense of the mashing together we do.”

“It wasn’t a conscious thing to do something really different, it was just what happened when three people got in a room together who all really love old school post-hardcore, pop punk and have had a deep dive into the modern emo scene,” says lead vocalist and guitarist Jordan.

“I’m pretty sure we’re what the internet refers to as ‘elder emos’, so I guess that genre was always going to seep its way in,” adds guitarist and backing vocalist Antony.

The name oozes emo vibes and definitely stands out from the crowd, reflecting the music’s contemporary update of post-hardcore with trap elements. A refreshing take on pop punk with honest and relatable lyrics and earworm hooks sets them apart from others in the scene. After being busy behind the scenes for the last couple years and creating a whole bunch of material, it was a no-brainer as to which tracks would make the cut.

“We’re pretty diplomatic and whoever’s idea is best in the moment, we tend to back completely,” explains Rich. “Originally, we had planned a tied-together three-part album, but due to the impact coronavirus has had on our lives we’ve ended up on this timeline.”

“There was plenty of demos with cool riffs or cool ideas that we’ve had along the way, but these songs were definitely the stand outs,” says Jordan.

“We’ve sat on these recordings for sooo long now, we had a pretty good idea which ones resonated with us the most,” adds Antony.

Debut single ‘Haunt’ remains a fan-favourite and live staple, while singles ‘Outsider’ and ‘Patterns’ have definitely earned their place on the EP. Intricate effects and lush production give the project subtle texture and hidden depth that unravel layers with each listen. The soundscape created by the interlaced songs allow you to get lost in the music, which is impressive with just six tracks.

“Sometimes songs are written easily, and with songs like ‘Bury’, it took longer to figure out what direction it was actually going to go in,” says Rich of the creative process. “The end breakdown only really hit its perfection after I tracked the low vocals – Jordan said “Hey, lemme try something”, sang over it again, and we all looked at each other in absolute delight knowing we had struck gold.”

“The amount of time we got to spend just forming ideas, riffing and demoing really was to our advantage, rather than rushing stuff because we had shows coming up or something,” says Jordan.

“Some things come easily, whereas others definitely needed more thought, and for us to be a little more critical of ourselves,” explains Antony.

BWLOMHIYB showcases all three vocalists with a range of musical styles, from sweet harmonies to soaring highs and harsh lows. It also demonstrates the band’s compelling versatility and deeply emotive songwriting with a pop punk flamboyancy. The band uses vocal sampling in opener ‘Rope’ and closer ‘Haunt’ to cohesively round out the EP with poetic quotes of fear and love – two of humanity’s oldest and strongest emotions at the core of Nervous Light’s music.

“For me, my biggest influences lyrically are post-hardcore bands such as Bayside and Silverstein,” says Rich of the band’s vast inspiration. “The lyrics are written as a collaborative effort, so we would sit and write together just flinging ideas around and seeing what stuck.”

“We started this project shortly before a lot of long standing fixtures of my personal life started to unravel, so there was no shortage of influence as far as taking from real life experiences go,” explains Jordan.

“Some of the stuff we write about is a reflection of stuff that has happened in our lives,” Antony agrees. “I mean, hell, we have an unreleased song that the lyrics are ones Rich wrote in high school, I’m pretty sure!”

Poignant opener ‘Rope’ discusses the fear and hopelessness of wanting to support someone who is struggling with their mental health, but not knowing how. The final lyric of the chorus is perhaps the most painful of the whole project: “You’re searching for something but you won’t find hope / At the bottom of a bottle or the end of a rope.”

The band have also teased some visuals for the EP, after releasing a snippet of the three performing ‘Bury’ in the week of release. We asked if there could be a video on the way, and we technically didn’t get a ‘no’.

“It was more so just to have a visual component to throw out as promo,” explains Jordan. “But the whole thing is sitting entirely edited on my laptop, so maybe!”

“We spent a weekend away in a beautiful cottage and may have shot something you’ll all see later this year,” adds Antony.

Now that most venues in Queensland are back to full capacity and border restrictions have eased, it looks like interstate shows are on the books for the Brisbane boys.

“We’ve got a few coming up over the next several months at home in Brisbane and have had some chats with some interstate friends about putting something together in the second half of the year,” hints Jordan. “I dearly miss Melbourne.”

We also asked what their plans were for the future, and they’re not going to settle for small.

“I just wanna support cool bands like Can’t Swim and Silverstein when they all finally get to Australia!” says Rich.

“Continuing to evolve whatever ‘our sound’ is, putting out music that we love and playing shows with our mates,” says Jordan. “Definitely would love to play some bigger shows or hop on some supports when international tours start up full time. I would sell my first born child to share a stage with nothing, nowhere.”

“We’ve all been in plenty of bands over the years and want to take this as far as we can,” says Antony. “I’ll throw in my first born with Jordan’s for a nothing, nowhere. support, too!”

The ambitious trio have their sights set high and, with promising moves like this one, rightfully so!

Nervous Light will be performing at the FREE Polarfest Mini event on 25 February at Greaser Bar in Brisbane, alongside Monsters Up North and Ay3la. More info can be found HERE.

You can stream Bury What’s Left of My Heart in Your Backyard on Spotify HERE.