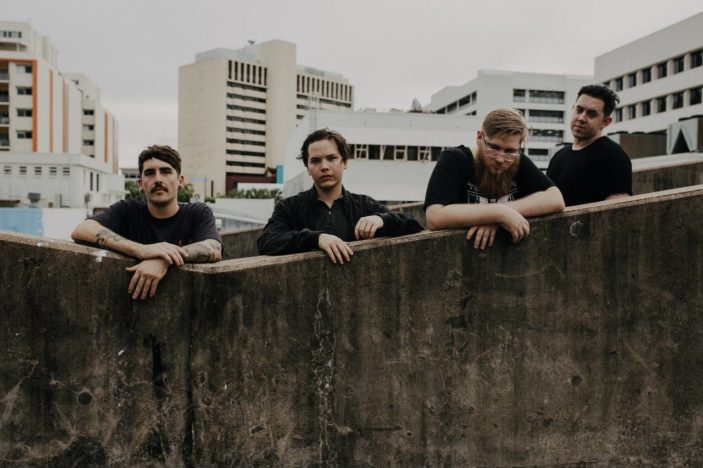 Darwin metalcore quintet We Burn Bridges have recently shared their latest single “Death Curse” featuring rapper and ex-member BxK, along with awesomely graphic visuals. The band will be celebrating the release with a single launch at The Railway Club in Darwin on 3 December, supported by DRAFTDAY, Ask the Axis and Whisper.

We had a chat with vocalist Jack Ryan to discuss the single, launch and what comes next.

“Guitarist Manoli had the opening riff and that was the base of the song, for sure. Originally, we were thinking of maybe putting some clean vocals in the rap area, but we were just kind of unsure… We ended up sending the song as well as the lyrics we had at the time to our old guitarist, who is rapping on the track, and he had something back within an hour.”

“Death Curse” is such a unique track, from the constant rhythm switchups to the rap verses spearheading the gruff screams. The programming peppered through the mix adds an interesting layer to the song, while the triplet breakdown opens the bridge up for a wall of death. It blends traditional metalcore and contemporary hip hop elements to create that signature We Burn Bridges sound.

“I’ve been listening to a heap of 90s hip hop lately and that was definitely a huge part of why we put a rap part in the track. But I guess, yeah, just a general blend of styles together as a band – we all kind of listen to slightly different music. And yeah, it really came together in this song again.”

The accompanying video is just as violent as the song and looks like it was a lot of fun to shoot. The band performs the song deep in the woods with overlay of Jack hunting down and killing a young man with a machete, welcoming a red filter to the remainder of the clip.

“We got so lucky. Our good friend Jaden Boyle, who filmed it for us, basically did it free of charge. And he was really good to work with, it was nice having a friend there. It gave us a bit of confidence and comfort, I guess, in feeling free to kind of experiment and try different things without feeling silly because we’re not used to being in front of the camera.”

“Death Curse” has a very similar theme to previous single “Predator”, so it begs the question: will they be appearing on the same project sometime soon? The first two offerings since their 2019 debut EP Head Prison are very promising for the future of the band.

“Look, I’m not going to count it out. But at this point, no. It just sort of happened that, when we got back together as a band and started writing, those two were the tracks we kind of came up with. And we were really just in the studio together having fun with it and not putting too much pressure on ourselves to try and be real serious.”

We Burn Bridges will be hosting a launch show at The Railway Club in Darwin on 3 December to celebrate the release, supported by DRAFTDAY, Ask the Axis and Whisper. With two fresh singles and a lot of energy, the band are keen to hit the stage again and hopefully play a lot more shows in the future.

“It feels incredible to be playing live again. It’s obviously why we do what we do because it’s just the best feeling in the world to get up on stage and have people kind of screaming your lyrics back at you. We’ve really put a lot of effort and money into our performance as of late, so really excited for this headline show. It’s our first headline show in three years. We’ve got a few little surprises up our sleeve and we want to come in and hit it hard.”

Darwin’s heavy music scene seems to be sitting on a lot of untapped talent at the moment. With Tapestry steadily making a name for themselves in recent years, there are many more bubbling just beneath the surface. We asked Jack which artists we should be keeping an eye on from his neck of the woods.

“I’ll tell you what, I reckon Temperamental have been hitting it real hard lately. But honestly, the Darwin music scene in general, I think, is so underrated. Only because we don’t get as many shows, or even the opportunity to play as many shows.”

So, will there be a chance to see We Burn Bridges in the new year for those of us down south?

“We would love to make it happen; I think it’s very doable. We’ve just got to get a few things in place and hopefully, yeah, you’ll be able to see us in one of those states playing shows!”