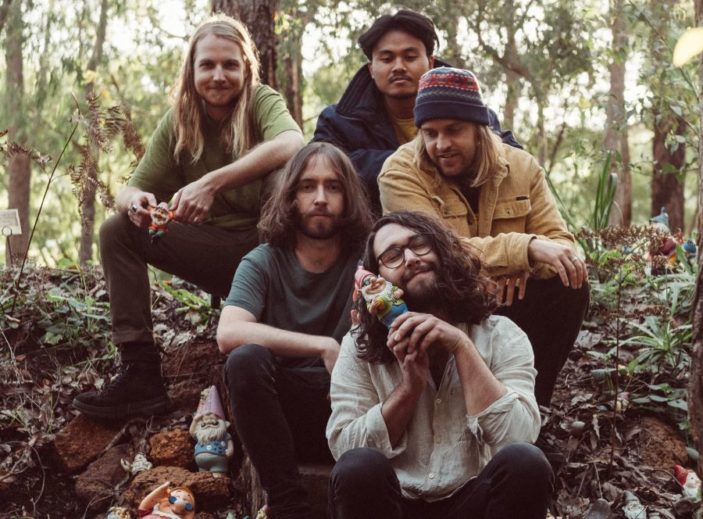 We had a chat with vocalist Jack McEwan about the upcoming album, international tours and the absurdity of it all. The call cut out twice before we got to the juicy parts, but the dreadful service granted us a successful third attempt.

“It was all pretty much done around the same period,” Jack says of the album’s production. “There were a few ideas I had while writing SHYGA! that seemed like they wouldn’t fit on the record. They were either a bit heavier or darker and we were trying to keep SHYGA! a bit more upbeat for a classic rock record.”

The new album comes just a year on from their last record SHYGA! The Sunlight Mound, which reached #4 on the ARIA Album Chart and #1 on the AIR Album Chart. With three successful singles out and the fourth – ‘Acid Dent’ – due 20 April, the most recent ‘Bubblegum Infinity’ already has over 500K streams.

“It became a sort of trial album, I suppose, of bits and pieces that I wanted to save for some future one,” he continues. “There were three ideas: I wanted to do a heavy record, then an orchestral one, and what slowly turned into Night Gnomes – which is really pretty at times but still has a kind of heaviness to it.”

While much of the material for the new album was written at the same time as the last, the band was able to let their imagination run wild as they adjusted to post-pandemic life. Night Gnomes moves into more melodic pop territory while keeping that hard rock sound we all know and love with darker subject matter. A lot of the album drew inspiration from real life rather than musical influences, facilitated by the harsh reality of rethinking a career as a musician.

“I think a lot of it was being at home and not knowing what was going on with our careers,” Jack laughs wearily. “I was like, ‘Well that was fun, I’ll go get a job now.’ I can never really write fictionally, if that makes sense. I’m more like a method writer where whatever is happening around me, I just seem to blur out. Night Gnomes was the last year or two of settling back in and realising you have friends. You’re not just in a band and that’s not the one thing that you do. It was really nice getting back into Perth lifestyle and there’ll be fingernails in the airport when they try to drag us away.”

Predominantly written during the second year of WA’s strict lockdowns, the album was recorded at both Jack’s house and Blackbird Studios in Perth. The band worked with Dave Perkin (Tired Lion, Jebediah) in the studio and it was mixed and mastered by Michael Jelinek and Brian Lucey. Rather than overcrowding the mix with excessively layered takes, instead Jack kept the vocals isolated and allowed room for more engaging effects and techniques to avoid strain on the listening ear.

“It’s almost like three times that you listen to a track: when you’re recording it, when you show the boys, and then when it’s released,” Jack explains. “I suppose recording from home, I can just wake up whenever I want and do whatever I like. In the studio, it’s got a chronological order. You go from track one to ten and that’s how the record sounds. I quite like the freedom of just being able to record and work on anything.”

“Listening back to older stuff, I remember thinking it was so cluttered with like five vocal parts,” Jack recalls. “It’s always probably been just me not comfortable with my voice. Now it’s just managing to get those vocals to be heard and there’s more room for the music then to come through. Learning from each record and moving on to the next one, then making sure you don’t make those mistakes again.”

The new album features 11 compelling and varying tracks in a cacophony of sounds with a soothing vibrancy. There is a method to the madness as the band explores new sonic ideas they have only dabbled in with previous efforts. Night Gnomes consists of material that will appeal to old school fans while offering a glimpse into where the band is headed next. Especially with awesome song titles like ‘Lava Lamp Pisco’ and ‘Dread & Butter’.

“It’s usually just a working title,” Jack says of the odd names. “I couldn’t call it Track One or Intro or something like that. When you’re reading a menu, I don’t know what I’m going to expect, but you’ve already got the burst of energy that you want beforehand with some words.”

Jokes aside, the band will be taking their new album overseas on a 23-date USA tour in April, supported by Acid Dad, and a 22-date Europe & UK tour in August. The fact that they can tour internationally but still can’t even do a lap of their own backyard is crazy. Nevertheless, it won’t be long until you can see the Crumpies live and in the flesh at a city near you.

“For a long time, I didn’t really want to be anywhere because I was just missing home so much,” Jack says. “It got to the point where I feel like my life has managed to make sense a bit now and there’s a comfortability like we can do this as a job. I think before, we were just sort of running riot and trying to make the most of every moment like it was the one time we would ever get to experience it there.”

US TOUR – With support from Acid Dad