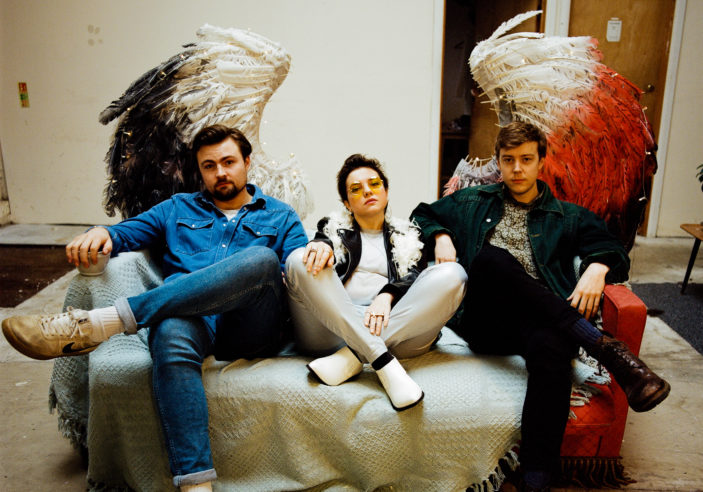 This week sees London future soul outfit Goldrain release “Atlantis”, the second song to be released from their forthcoming debut EP Mysteries, and their second ever release as a band. We’re excited to bring you this exclusive first taste of the stunning single ahead of the official release at the end of the week.

Formed in March 2019, Goldrain are Barbara Dudek, Harrison Moore and Owen Smalley. The trio studied together in London at the London College of Creative Media. As is often the case when you get a group of creatives and musicians together, a band was formed. The trio travelled to Impression Recordings in Berlin in October last year to record. Across six days the band laid down the six songs that make up their forthcoming EP Mysteries. The band have described the EP as a map of the band’s origins, and it showcases their diverse sound.

“Atlantis” explores ideas of womanhood and the ways in which the commercial world and capitalism interacts with, creates, and influences notions of femininity. According to Barbara Dudek, the songwriter:

“This song is a deeper reflection about femininity, an attempt to find it anew. ‘Atlantis’ itself as a ‘wonder island’ was a good metaphor for me to sing about the wild spirit, deeper sorrow, intuition, and instincts as a bunch of necessary tools for every woman’s life and how they seem to be sinking fast. How come our fire went under the water?! It’s also about just being exhausted by constant pressure coming from the media and entertainment world regarding a woman’s body, look, and the ageing process.”

However, there is also the idea that the song, not only identifies commercialism’s undue influence, it also seeks to actively resist it. As Owen Smalley note, “it [“Atlantis”] also stands as a way of communicating resistance to those expectations. Not only through the lyrics, but also through this tenacious groove that puts its foot down and never really lets up”.

What is clear from “Atlantis” is this is a band unafraid to tackle the big issues. It is also a band that is confident and comfortable in their sound and style. This is only their second ever release, and yet it’s delivered with such poise. The music scene in London is bustling, whatever the genre, and Goldrain do not sound remotely out of place. “Atlantis” is a bright and bold melting pot of jazz, funk and rock. Led by Dudek’s distinctive vocals and grounded by some quality interplay from Moore and Smalley, “Atlantis” finds its groove quickly and truly delivers.

Stream the single below and make sure to give it a pre-save too.

“Atlantis” releases Friday 21st August. Pre-save the single HERE. You can keep up to date with everything Goldrain via Facebook, Instagram, and their Official Site.