Sahara Beck is nursing a twisted ankle after a spirited BIGSOUND performance the night before. From her telling, injuries seem to be a common occurrence for her at the festival; sometimes physical, other times her pride.

“Footstomp Music Management had a party and everyone was upstairs doing business stuff and talking,” she says. “Me and Tom Busby (Busby Marou) and DJ, my drummer, went down to the carpark just talking shit. We just started joking around, like, [starts rapping] ‘I came to the party and you were here’. Half an hour later, everyone from the party was down in the carpark watching this rap battle happening.

“I’ve actually been banned from rapping by my friends. It just sounds horrible. I just can’t do it,” she laughs.

Music fans may never hear Sahara Beck rap, but they have definitely heard her voice. The Brisbane-based musician has been releasing music since 2011, beginning with her debut album at the age of 15. She has since released her 2016 follow-up album Panacea, and sang Keane’s “Somewhere Only We Know” for a Queensland Tourism ad campaign and the blues standard “Spoonful” for an Haagen-Dazs ice cream commercial starring Bradley Cooper. But change is afoot with her new single “Here We Go Again”.

Gone are the acoustic guitars, kazoos, and folk stylings. With “Here We Go Again”, Beck has returned as a pop songstress with big choruses that match her massive vocals. It may seem like a massive leap, but for her it was “a natural progression. I haven’t released anything in about two years, so I had that time.”

During that time, Beck challenged herself and her songwriting. “I gave myself a challenge of writing 50 songs before I release anything again,” she explains. “I did a lot of writing with different people. I was writing with Harry James Angus from The Cat Empire, Evil Eddie from Butterfingers and Sam Cromack from Ball Park Music. When you have someone else in the room there’s just a different energy that comes out.”

Those 50 songs were whittled down to her 10 best, which she brought with her to record with producer Tony Buchen in L.A. Rather than simply record Beck, Buchen worked with her on her songs to further explore what other energy would emerge.  “Here We Go Again” was a late addition to the upcoming album, born during a period of loneliness Beck experienced in America.

“That whole week was really hard because I was in this place that I didn’t know and I felt alone. But once I got through that in the first week I felt like it was a really beautiful realisation for me to go, ‘Yeah, I’m alone, and that’s a good thing. I enjoy being with myself’. That helped me let go of putting up with people who drain me of my energy and take advantage of me or put me down. There were a lot of situations that I was not letting go of that weren’t good for me because of the fear of being alone.”

That song fits the album’s theme of self-empowerment. “All the ones I’ve done so far in that group of songs have been very much about recognising what makes you powerful in yourself. They’re all a lot more poppy, and the production is a lot bigger than anything that I’ve done before. It’s a different sound and a different vocal treatment.”

Those songs were debuted during Beck’s performances at this year’s BIGSOUND. Next she will be heading out on an East Coast tour in November in support of “Here We Go Again”, with the album set for release next year. Until then, Sahara Beck will be nursing her twisted ankle and living in bubble wrap for protection.

“I am injury prone! I shouldn’t be allowed to drink or leave the house, but I do,” she laughs.

“Here We Go Again” is available now. Follow Sahara Beck on Facebook here. Catch her on her upcoming tour: 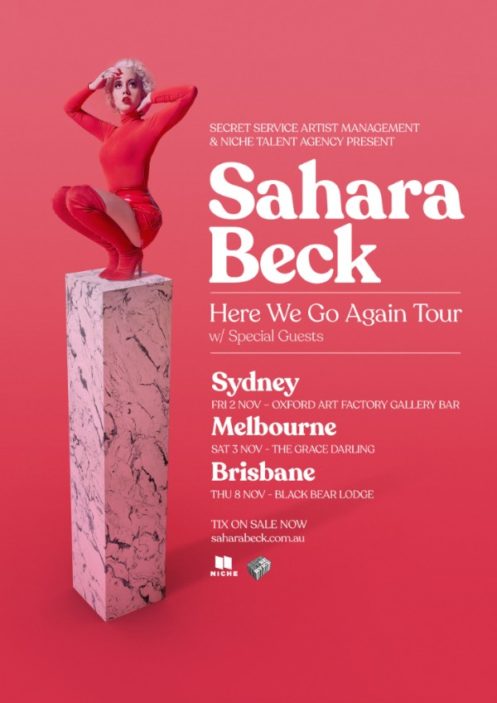