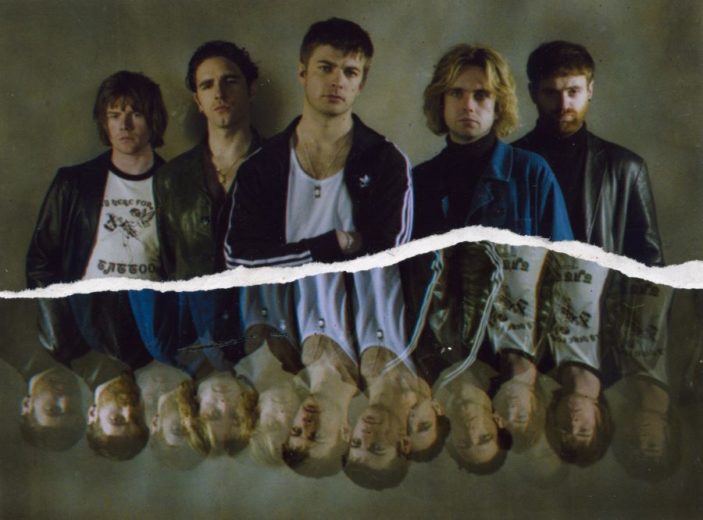 The third album has always seemingly been the make or break album for a lot of bands. Often garnering some love on the first album after a string of successful EPs and singles, a band might follow up with the fabled sophomore slump or recycle reliable sounds from their first album and release as new on their second LP. On the third album, bands are either throwing caution to the wind in a last gasp attempt to reinvent themselves, or they’ve mastered their sound so much in their first couple of releases, that album three tends to be slightly experimental and removed from what they’ve become known for, while always maintaining the raw authenticity of what set them up to be loved by fans to begin with. Here on their third album, Ireland’s Fontaines D.C is removed enough from their first two albums that their new album Skinty Fia could in the long run become their magnum opus.

After debut Dogrel set the scene for a band with wit, charm and recklessness entwined in their DNA (“Boys In The Better Land” and “Liberty Belle” still get rinsed on my playlists), follow up A Hero’s Death gave critics everything they wanted from the band and delivered the praise and love the band may or may not have wanted to receive (did someone say Grammy nom?).

Now on Skinty Fia, the band has gone down a slightly darker, uneasy path as the band has re-emerged in a new city with new stories, experiences and a morphed view on their homeland as they look from the outside in. Opening tracking “In ár gCroíthe go deo” (translates to ‘In Our Hearts Forever’) has an almost gothic cathedral feel, which is quite fitting considering the themes of the song centre of an Irish lady’s battles with the Church of England. At almost six minutes in length, “In ár gCroíthe go deo” is as true a first taste of the album that any track could have been if made to open up Skinty Fia.

It’s quite obvious why the lead singles of Skinty Fia were “Jacky Down The Line” and “I Love You”. While different in their delivery, they’re both as catchy, enticing, dysfunctional and haunting as the other. “Jacky Down The Line” tells the tale of an abusive relationship built on cycles of dysfunction and gaslighting, while “I Love You” is an ode to the band’s homeland as they openly spell out their love for Ireland and the guilt that has followed with their ascent to success.

“How Cold Love Is” is hypnotic with its choral chant, almost as if to force the listener into remembering the song and its contents indefinitely, whether for good or bad (not like an earworm does, but like ‘this may traumatise you forever’). The most traditional of ‘rock’ songs on the album comes in the form of “Roman Holiday”, four and half minutes of whirling guitars, tempered drums and a slight disdain for Mother England. Drawing on frontman Grian Chatten‘s relationship with England, it’s clear the band still has massive love for their roots despite now calling London home (as an aside, as someone with Irish blood in them, I entirely relate to the lyric ‘I don’t wanna see the Queen//I already sing her song’). While “Roman Holiday” may be a traditional rock sounding song, “Bloomsday” feels like Fontaines D.C if they were trying to embrace their earliest of sounds without making it too obvious.

The titular “Skinty Fia” has a grimey, industrial feel, almost as if it came straight out of an underground dance scene of years past (think something like Underworld or even Chemical Brothers). As a song that builds brilliantly (beaten only by “I Love You”), “Skinty Fia” will be massive in a live space and feels like the avenue the band may end of chasing in coming years.

For an album whose title quite literally comes from a combination of an extinct native deer and an Irish-ism for ‘for fucks sake’, there is an undeniable sense of depth, nostalgia and magic on Skinty Fia. While perhaps not as immediately accessible as their previous efforts, there is a feeling Skinty Fia may well become Fontaine D.C’s album that needs to be listened to on a whole, rather than as singles in isolation. And in a time where attention spans no longer exist and media is churned out and consumed quicker than is probably needed, there’s a certain level of romanticism in Skinty Fia that suggests the album could become one for the ages.

Skinty Fia is out Friday 22 April.