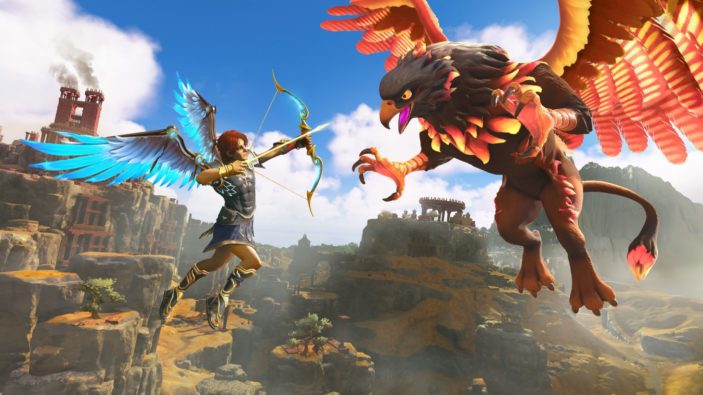 Immortals: Fenyx Rising is Ubisoft’s first original AAA IP in god only knows how long. Ubi has a built a reputation as a publisher that likes a safe bet. Ubi’s franchises are guaranteed to sell. This makes launching new IP a big risk. That it comes at the dawn of a new hardware cycle is no surprise. If there’s ever a moment to take a punt and see if a weird idea might work, it’s now. Should it fail, you still have an entire hardware generation in front of you. If it succeeds — and based on the three hours I’ve played, I reckon it will — you have another safe franchise on your hands.

Immortals: Fenyx Rising is an open world action-adventure title set on the Golden Isle, the realm of the Ancient Greek gods. Typhon, the mad titan, has broken free of his prison in Tartarus and has taken the entire Pantheon hostage. Short on friends and in need of assistance, Zeus goes to see Prometheus. Prometheus, bound to his rock as punishment for giving humanity the gift of fire, embarks on an epic story about a mortal named Fenyx, the one who will save the Golden Isle.

Fenyx is your character, a mortal who, despite all of Zeus’ confident insistence to the contrary, begins to accumulate the kind of power wielded only by the gods. Prometheus dutifully narrates their every travail. Prometheus’ attention to detail is frequently edited and rewritten by Zeus, who counts the attention span of a coked-out squirrel among his many powers.

The most obvious design inspiration for Immortals is The Legend of Zelda: Breath of the Wild. Immortals cribs quite liberally from Nintendo’s magnum opus, using its climbing mechanic, its minaturised dungeons, and various special abilities for puzzle solving. It didn’t necessarily feel like it had the same open-ended, experimental nature as BotW. It would be difficult for any game to measure up to that kind of scope. Instead, Immortals picks its strongest single mechanics, building its ideas around individual systems rather than an attempt to replicate a particular experience. Where it veers quickly away from BotW is in its presentation.

The sound of silence

BotW was a game that used silence as a part of its broader tonal palette. Link was a lone adventurer in a dormant, hushed world. The silence compounded your solitude, it caused the scale of the game to yawn into the distance. The world, like your personal responsibility, felt oppressively huge. By contrast, Immortals: Fenyx Rising is that one friend who compulsively fills any silence, no matter how small.

It’s not all bad, certainly — some of the jokes are actually very funny. Immortals‘ sense of humour is hyper self-aware. It knows its a Ubisoft game and goes out of its way to call attention to it in amusing, self-deprecating ways. I like that it has a sense of humour about itself. Greek history is frequently tragic but rarely funny. It feels like Ubi is filling a gap in their roster by creating something for young adult players. Immortals feels like it skews much younger than a lot of Ubi’s wider portfolio. It has the look and feel of Disney animation and the winking humour of a Pixar film.

I point this out for a reason. A lot of the interest in Immortals comes from its proximity to BotW. If games that are especially chatty or light-hearted annoy you, then you should know what you’re getting into. If you’re less particular about it, you will likely find a lot to enjoy.

Beyond that, it seems to adhere to many of the Ubisoft staples. The team behind Immortals is Ubisoft Quebec, the team behind 2018’s Assassin’s Creed Odyssey. Given Odyssey‘s colossal size, it’s surprising to find that Ubi Quebec hadn’t gotten all the Greek mythology out of their system. Here, for all the new design involved, they play to their strengths elsewhere. The Souls-y combat of the modern AC is retained here, though in a more forgiving manner that befits its younger audience. You’re still diving in to deliver precise blows and looking for perfect parries, but the game didn’t feel like it punished mistakes too harshly.

Immortals: Fenyx Rising feels like it might have what it needs to be the next big Ubisoft franchise. On the surface, it leverages all of Ubisoft’s favourite design tricks — an open world, large skill trees, openly cribbing ideas from the competition, filling any silence with jokes — which, if you’re only watching trailers might give you the wrong impression. The three hours I spent with it gave me a glimpse of a game that is full of self-confidence.