Tom Clancy’s Ghost Recon Breakpoint Review: Out of the Wildlands

Ghost Recon Breakpoint feels like many of developer Ubisoft’s games up until this point. A custom created character dropped into an open world, fitted with some light RPG elements. Think The Division and Assassin’s Creed. However, this time around, Breakpoint’s main draw is its story, and admittedly, it’s a large improvement over the one featured in Wildlands. Players take control of a custom created character as they head to the fictional island of Auroa to investigate a communications malfunction, only to have your helicopter shot down, with half of your crew either dead or missing. The opening hours of Ghost Recon Breakpoint are at their best in terms of both narrative and pacing, as the open world serves as a guided tour through the game’s most important moments. Very early on in the experience, you find your nemesis to be none other than Cole Walker (played by the wildly talented Jon Bernthal), an ex-Ghost, whom you have worked side-by-side with on previous missions. Don’t get me wrong, the idea of using an old friend as a new enemy works, and Bernthal’s performance is an absolute standout. Without giving much more away, I found the story to be one of the best parts of the experience simply because of its cinematic qualities, something Ghost Recon Wildlands was severely lacking. Even though Walker was introduced in Wildlands, I found focusing on a more traditional narrative and fleshing out less characters to a deeper degree was the right move for the franchise. However, I mentioned the opening hours held the greatest moments, as the story, along with Bernthal, seemed to go missing in large patches throughout most of the experience. Think of the narrative as a crappy hamburger with really nice buns. It’s a shame because, the narrative itself was such an easy step forward for the franchise, only for it to take two steps back early on in service of pushing that repetitive gameplay loop. 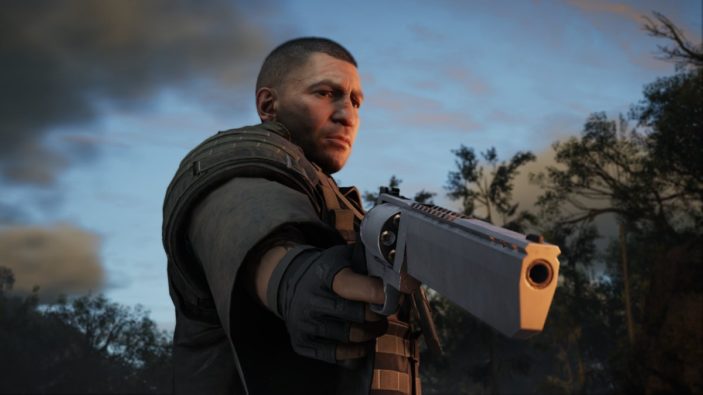 Gameplay in Ghost Recon Breakpoint is arguably as good as it’s ever been; but that isn’t saying much, as little has changed since Ghost Recon Wildlands, having refined the series with its tactical yet accessible gameplay. In Breakpoint, users still have multiple aiming options, including through the sight, over the shoulder and on the hip, making every encounter one of choice and strategy, while stamina plays a large part in remaining effective in combat. Guns feel responsive and punchy, and can be altered through suppressors and multiple firing rates to boot. If you played Wildlands, you won’t find much here to blow your mind. However, that remains one of Breakpoint’s strongest aspects, servicing the old saying, if it ain’t broke, don’t fix it. It’s also worth noting that players can take advantage of a large number of vehicles, from bikes, to helicopters, and while they all feel a little stiff around the edges, their purpose is serviceable at best. Breakpoint does try its hand at bringing something new to the franchise in the form of survival mechanics. But one step forward proves to be two steps back yet again, as these survival mechanics rarely extend beyond collecting and drinking water every so often to keep your stamina at optimal levels. While Breakpoint offers up more terrains than ever before, I feel as thought this is a missed opportunity to deepen those mechanics around issues of clothing and cleanliness. Hell, even Metal Gear Solid V: The Phantom Pain punished you for not keeping yourself clean by allowing enemies to smell your presence; and that game is bonkers. It’s really hard to say anything other than the fact that Breakpoint might be a cleaner version of Wildlands; but that’s about it. Cooperative play is back, and while it doesn’t add much in terms of outright gameplay mechanics, you’ll most likely create some of the most interesting stories in the process, especially during the middle portion of the experience which lacks much of the narrative.

While the gameplay is solid in most areas, the loop did little to strengthen or promote those pillars. As previously mentioned, the opening hours of Breakpoint are strong; but the further you get into the narrative, the less Breakpoint seems to shake things up, leaving you grinding for any shred of a story. After those initial hours, gameplay boils down to tracking down and investigating enemy camps, using your drone to identify and mark enemies, while you pick them off in any way you see fit. While Ubisoft games are no stranger for this formula, I felt as if the vast open world failed to shine as the repetitive gameplay brought back similar camps with little enemy variety. There is so much at your disposal, from weapon and vehicle choices, to your method of approach. Choosing to scout first for a better grip of the layout (and bonus XP) seems like the logical choice, but that game doesn’t necessarily press these methods to your face, letting you dress the situation as you please. But when every situation feels the same, your options become equally limited regardless of your setup. 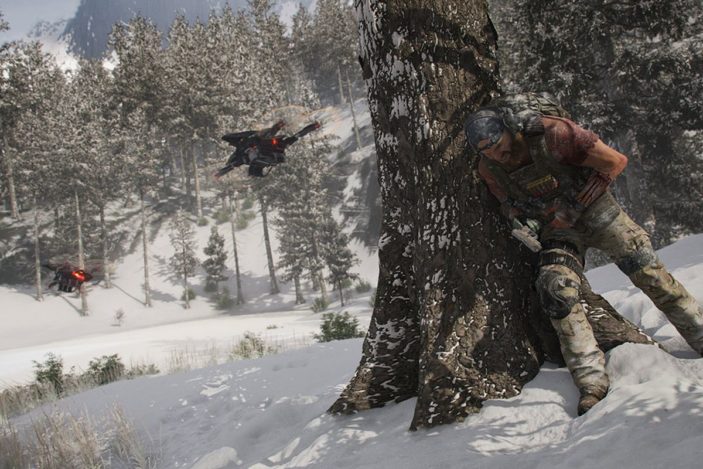 Breakpoint does try it’s best to get with the times, adding gear-based levelling system. Looting enemies for both gear and weapons improve your overall character level, putting you on par with equally matched enemies depending on your progression and locations. While this encouragers both strategy and choice, in the sense that you must develop certain load-outs to suit either your enemy or situation, I found that the levelling system never made me feel like I was either under or overpowered. Either the progression system feels really natural, or unnecessary. I feel like it’s the latter, as Ghost Recon prides itself on being a tactical shooter rather than a bullet sponge infested shoot-em-up. Weapon stats rarely feel like they matter, and when they do, it’s for enemies who have a major advantage over you, be it from their excessive health to their damage output. Think of this system as mash-up of The Division 2’s levelling system, and Destiny’s ‘Light’ system. Breakpoint rounds out the experience with an online mode called Ghost Wars, which pits players against each other in various attack and defend modes. The only issue, is that here, weapons are normalised, meaning guns and gear do not have significant advantages or disadvantages unless you are using a weapon that is specially more powerful such as an LMG or shotgun. I found these modes to be entertaining, and an interesting shift in pace, as locations are much smaller, and as each squad is placed further apart in a bid to reach a certain location, tactics are encouraged.

Breakpoint also includes micro-transactions, but I felt I never had to go near them, as most of Breakpoint’s gear can be obtained in-game. This struck a cord with me, and while initially positive, I soon felt as though Breakpoint fell victim to the traditional micro-transactions pitfalls of almost any other game of its kind. Oh, what’s that? You don’t want to fork out real money in order to get that weapon you’ve been aching to use? Oh well, guess you have to put more hours into our game then! (Insert evil laugh here) It’s not just the micro-transactions that taint the experiences multiple bugs and glitches rear their ugly head at almost every corner. Almost every time I jump into Breakpoint, my character holds an invisible gun for the first couple of minutes, without fail. Top it off with some bland textures that take forever to load, and a progression that doesn’t track your… well, progression. I’m not joking, for the first couple days, after a few hours of playing Breakpoint, my campaign progress showed up as 0%.

Overall, Ghost Recon Breakpoint is admittedly full of what made Ghost Recon Wildlands such a hit. Filter in a deeper narrative and cinematic gameplay, and you would be forgiven for thinking this would fare even better. But due to an uneven story, bland survival and levelling mechanics and pointless micro-transactions, Ghost Recon Breakpoint’s exciting step forward has resulted in two, disappointing steps back.