Earlier this month, bestselling author Matt Haig was in Australia for the Byron Bay and Bendigo Writers Festivals. Whilst he was in the county we caught up with him to discuss his new non-fiction release Notes on a Nervous Planet, how he manages to juggle so many diverse projects, and whether there are any updates on the proposed film adaptation of his latest novel How To Stop Time.

Matt Haig is the best selling author of Reasons to Stay Alive and The Humans and four other books for adults. Whilst, as a writer for children and young adults he has won the Blue Peter Book Award, the Smarties Book Prize and been shortlisted three times for the Carnegie Medal. His latest book Notes on a Nervous Planet explores the ways in which the trappings of modern life can affect our mental health, and the ways in which we can feel happy and whole in the 21st Century.

Congratulations on Notes on the Nervous Planet hitting five weeks at #1 on the Sunday Times Bestseller list! Could you tell us a little more about the book, and what prompted you to return to the realm of non-fiction? (Ed Note: At the time of publishing it’s now enjoyed 7 weeks at #1)

It took me years after writing Reasons to Stay Alive to even contemplate writing another book about mental health, and I vowed I wouldn’t unless I had a topic to return to. But, during that time I realised that mental health isn’t really talked about in the same way we talk about physical health, in the sense that we don’t look at mental health in context or about how we live in terms of lifestyle; we’re so used to that being about physical health, whether it’s passive smoking or sedentary lifestyle or fast-food or whatever.

So, with this new book I was trying to put mental health in general and also my own mental being in context; in terms of how it relates to the modern world. I feel like we’re in a period of unprecedented change, with such fascinating technological advancements. Whether we think it’s a good thing or a bad thing this change in general, it’s change, and that’s destabilising in itself, and could be effecting our collective mental well-being and that was sort of fascinating…

I knew it was at that point for me to start writing, and it was therapy for me, with my own mental health. It helps me work out how my mind is connected to the world, rather than just sort of see It as some random brain lottery where I feel a certain way for no reason whatsoever.

In the book you describe Notes on a Nervous Planet as a “messy book”. It is also a book you can read quite linearly, or simply dip in and out of. How did you approach the researching, writing and ordering of the material?

Well, the key word in the title for me was ‘Notes’. As soon as I had that it kind of let me off the hook and I could sort of do what I wanted to do. So, there was no plan really; obviously, this book is more research heavy than any other book I’ve written before, but I was still very much determined for it not to be defined by being a typical self-help book or a typical academic book or a memoir or anything of those things; I just wanted to weave as much as possible around the theme of the modern world and how it affects us mentally, and go wherever I wanted to go with that. There was no plan, there was no sort of line at the start; it was just free flow.

Over the last twelve months (give or take) you’ve released three books, with another impending, each quite unique and diverse in terms of genre and intended audience. How do you manage to juggle or balance the different demands of each? Do the projects overlap?

A little bit. But generally, you know each book is different. Whether you’re writing two novels for adults or two children’s books, every book is its own thing; so, with each book you almost have to learn to write again for that book and each book has its own particular demands. 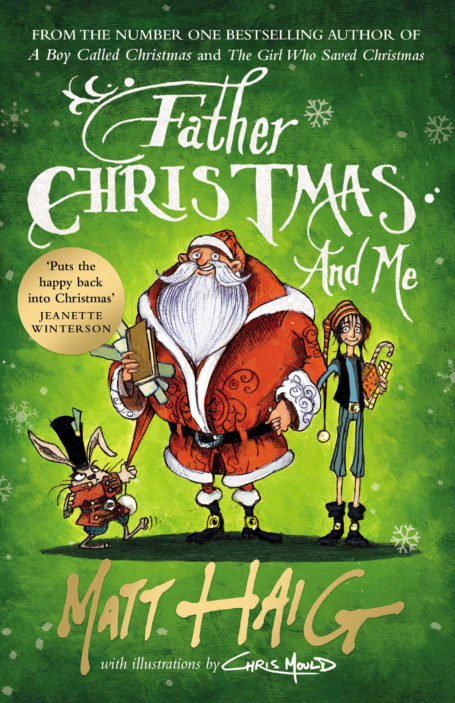 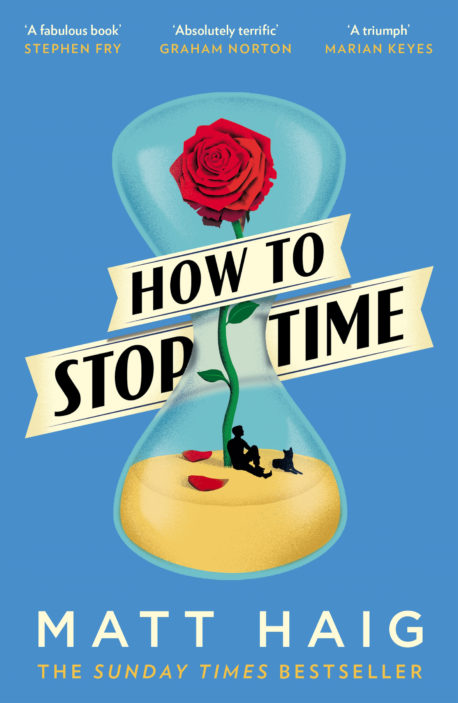 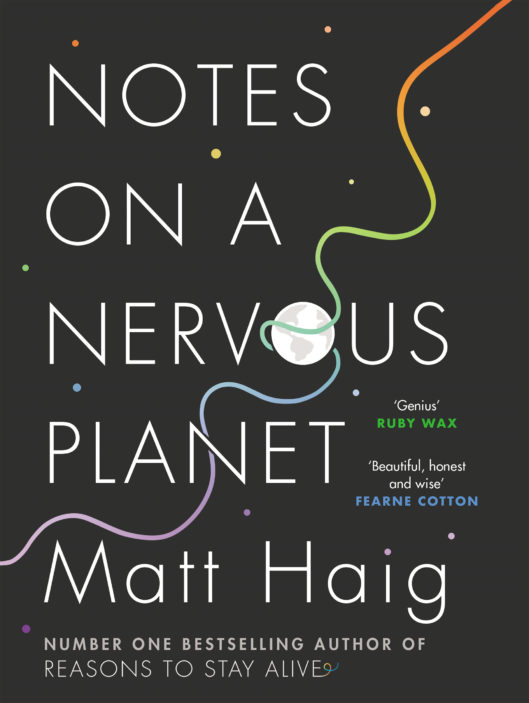 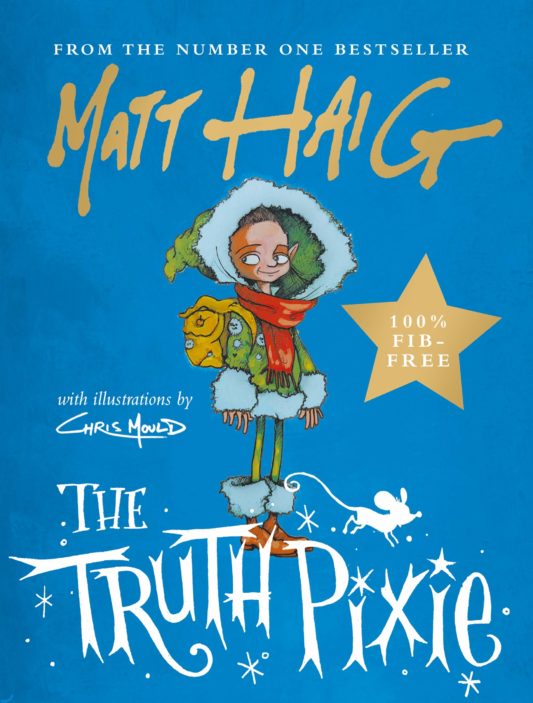 What are the some of the appeals of each different type of project? And do you have a preference?

I don’t have a preference as such. I mean my preference is to always start something that feels quite new. So, Notes on a Nervous Planet felt new. It felt fresh and I hadn’t written anything about mental health in about four years and then I’m writing a children’s book. It’s the newness I like, and that’s where the creativity comes from, trying to find and do something new.

Societally we’ve gotten better about talking about mental health, but there’s obviously still progress to be made, especially when it comes to men. What do you feel can be done to facilitate greater discussion and empathy?

I feel like a lot is being done in terms of conversation, but I do feel like our understanding of mental health still lags behind physical health; and certainly in the UK and I’m sure here in Australia too, in terms of things like funding and Infrastructure we are so far behind.

One of the reasons is that the science just isn’t there yet, but also, a lot of stigma still is there. So, I feel the big thing collectively, the sort of utopia to aim for, is a world where we don’t really talk about mental health and physical health as just seperate things and that faux wall that we draw between mental health and physical health would be demolished and we talk about just health.

You’re active on social media, a recurring topic in this new book, what are some of your tips for moderating social media use, or dealing with its more unsavoury elements?

You know, I’m definitely not writing this book from the high ground. I’m still someone who’s learning and on the path of understanding my own behaviour, and this book was a part of the process.

I feel like It’s all about being aware, because if we were encouraged to not be aware of how much time we’re spending on social media, we are not aware of how our lives are changing because of our smart phones and social media.

I mean for me it’s about simple things: being mindful of how much time I’m spending on there; charging my phone In the kitchen, rather than beside the bed and switching off notifications as well.

You talk in Reasons to Stay Alive and Notes on a Nervous Planet about how reading was a source of comfort and support. In a recent tweet you’ve also suggested that “Great novels… expand empathy”.

What have been some of your “great novels”, or books that have helped you see the world a little differently, or brought particular solace?

It can be all kinds of things. A book I always mention is The Outsiders by S.E. Hinton, which was the first book, as a teenager, that made me realise that books could be as thrilling and as entertaining as movies.

But it could also be a science book; I wasn’t always someone who was that into science, but then I read a book called Cosmos by Carl Sagan. That was a book that made me feel the magic and beauty of science and scientific understanding and is still a very therapeutic book for me. I can just dip into it, it’s like looking at the sky – whatever he is talking about, it just places you beautifully in this small sort of place in the Cosmos.

The Poems of Emily Dickinson I can read and reread, and get new things out it each time, and they often make me understand myself, and help me understand the intensity of the mind.

All kinds of people, for all kinds of reasons; I always found that question quite difficult .

Is there anything more you can tell us about the proposed How To Stop Time film adaptation? Are you involved in the project at all, kept in the loop, or simply sworn to secrecy on pain of biblical curse or something?

I’m sort of kept up to date. I don’t think they want me massively involved, and I’m totally fine with not being involved. They’re the professionals in screen writing and film developing, so, I’m leaving It to them. I think they’ve found a screen writer, pushing things forward – slowly, but in the right direction – yeah, that’s exciting!

And, I’ve got film stuff sort of happening further down the line too; like, I’ve written a children’s book called A Boy Called Christmas and that’s got a director and a screenwriter attached now, and that’s all going ahead. So it’s all exciting things, but to sort of keep me sane I’ve just got to focus on the book and writing on hand.

What’s next on the horizon for you?

I’m writing a children’s book at the moment. There will be grown-up novels too, and there’s probably going to be a third mental health book, which I don’t have a title for yet. But I’ll wait a while until I have something that I really want to say, so it doesn’t feel like a secret, or Notes on a Nervous Planet and Reasons to Stay Alive.

Notes on a Nervous Planet and How To Stop Time are both available now through Allen & Unwin.

Matt Haig’s next children’s book The Truth Pixie is due for release in November 2018 also through Allen & Unwin.

If you or someone you know needs support, or wants to talk to someone, you can find a list of groups and organisations that offer resources, helplines and support HERE