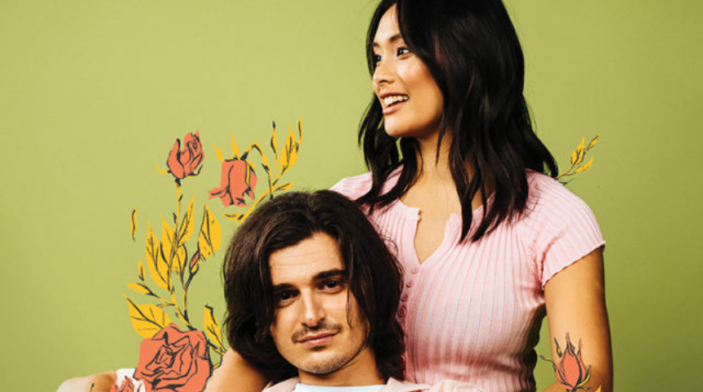 Intimate, heart-breaking and occasionally very funny, Jason Robert Brown‘s The Last Five Years has taken to the La Boite Roundhouse stage under the direction of Darren Yap. Chronicling two 20-somethings as they fall in and out of love, the musical navigates the years of miscommunications, crossed wires, and heartfelt attempts to salvage something that perhaps never should have been.

With Jamie (Robert Tripolino) sharing his side of the story chronologically, and Cathy (the astonishingly good Danielle Remulta) beginning at the end, the show is at once both intimate and isolating. The ill-fated pair truly cross paths only once – at their wedding. For the rest of the 90 minute run-time, they simply drift further and further apart, physically as well as emotionally.

Remulta shines as Cathy, and it’s genuinely heart-breaking to watch her story shift in reverse; the hopeful, freshly-in-love Cathy at the close somehow even more painful to see than the abandoned wife at the open. Tripolino is also more than up to the task, injecting sympathy into the honestly rather unlikeable Jamie. The upbeat first half of his tale is particularly strong, showcasing some wonderful comic timing, and nailing all the hallmarks of a young man falling in love and chasing his dreams.

Light on cast, with just Tripolino and Remulta treading the boards, the band become a key part of proceedings. Annie Silva (violin), David Friesberg (cello), Dr. Danielle Bentley (cello), Joel Woods (guitar), Patrick Farrell (bass guitar), and musical director/pianist James Dobinson make for an incredible team, and, alongside their leads, have crafted a show you simply cannot look away from.

To paraphrase Yap, addressing the opening night audience after the show, The Last Five Years makes a compelling case that it is, perhaps, better to have loved and lost than never to have loved at all. And after two years of missed connections and enforced isolations, maybe even a sad love story is better than no love story at all.