Theatre Review: Come From Away is still as moving, uplifting and hilarious as ever (Melbourne) 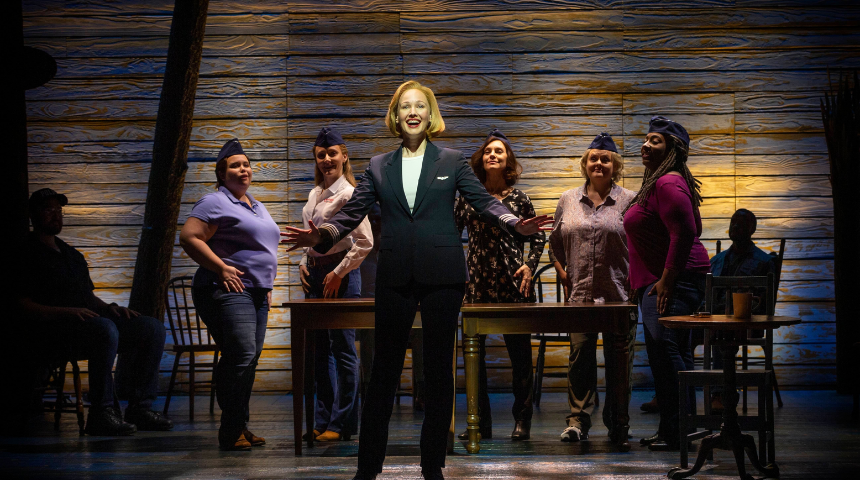 Three years ago, Come From Away crash-landed on Australian shores to rave reviews praising everything from the performances to the music. Now, the Tony award-winning musical has returned to Melbourne’s Comedy Theatre to spread its infectious joy and poignant narrative to new and returning audiences.

This is one of those shows where every individual element works flawlessly together. But if I was to chalk Come From Away’s success up to a single factor, it would be its ability to balance a tone that’s informative, emotional and comedic all at once. I can’t say I’ve witnessed another musical which had audiences reacting in unison to all three of those extremes. Sure, a collective laugh and resounding applause is a valuable response in any musical theatre setting, but the moments in which the theatre goes dead-silent are what really illustrate this production’s brilliance. They say silence speaks louder than words – a fact that’s clear as day in this production.

One thing that amazed me in Come From Away’s first Australian run was how such simple staging can go a long way. Once again, this show proves all you need is some strategically placed chairs, a revolving stage floor and a few smart-but-simple costume changes to visually tell all aspects of a narrative. When the narrative is this strong, combined with top-notch lighting and inventive saving, it’s easy to fill the gaps via your imagination.

This current production sees three returnees from the 2019 run in Zoe Gertz, Douglas Hansel and Emma Powell, with the rest of the cast made up of fresh faces. Once again, it’s Zoe Gertz who steals the show as “Beverly and others”. From her deeply touching dialogue to the standout performance of Me and the Sky, she is an indispensable part of the cast. For Douglas Hansel and Emma Powell, their experience in these roles is on full display as they ooze charisma and seem the most comfortable on stage. They breathe life into so many aspects of the show that it’s great to still have their presence.

Now, this could come across as a bit of a personal bias, having seen the original Australian cast twice back in 2019, but I believe some other performances in the ensemble don’t deliver quite as well as their predecessors. There’s certain nuances and quirks to a few characters that weren’t honed-in on as well this time around. I enjoyed what Joe Kosky and David Silvestri bring to their performances as Oz and Claude, respectively, though these were standout characters for me in the initial run. They’re certainly two of the most entertaining characters this time too, though I didn’t find myself as excited as I was when Simon Maiden and Richard Piper played the roles. It’s a minor (and very personal) gripe, but a gripe nonetheless.

I will however highlight the incredible work of the cast to completely transform themselves into multiple characters at the drop of a hat. For the visuals, putting on a hat or slipping into a jacket helps differentiate between an actor’s multiple roles – but you almost don’t need the costume changes to follow along with who’s who. The jumping back and forth between multiple characters is phenomenal to watch – a simple pivot to a new accent and some specific mannerisms and it’s like watching an entirely new person. I say simple, but it’s not actually simple – this cast just makes it look that effortless.

Amongst all of the hard-hitting emotional content, there’s no shortage of cutting-edge comedy to go around. If you’re yet to see the show, you’ll be thrilled by the strength of every comedic beat – consistently sticking the landing from beginning to end. If you’ve already witnessed this greatness, I can say first hand that the witty comedy is just as entertaining on a rewatch. Every character gets involved, contributing to some key one-off and running jokes, and adding to an extensive list of memorable moments.

Hilarious and heartwarming, this memorable production is guaranteed to stick with you long after leaving the theatre. If you’ve not yet gone to witness this spectacular musical, you’re in for a night of pure entertainment that never fails to excite. Go see the show everyone is raving about, and find out about the people who make the town of Gander so remarkably special.

Come From Away is playing at the Comedy Theatre in Melbourne through to October 16th. For more information and to purchase tickets, head HERE.