the ARTS review: what’s happening in the world of arts & film – issue 014

Welcome to issue 14 of the AU review’s ARTS review, our weekly peek into what is going on in the world of Art and Film.

In this issue A look at iconic images of the Stones, traveling Roy Lichtenstein exhibition direct from the National Gallery of Australia, war and peace on display at the QUT Art Museum, and Trevor Ashley returns with a revamped Fat Swan. 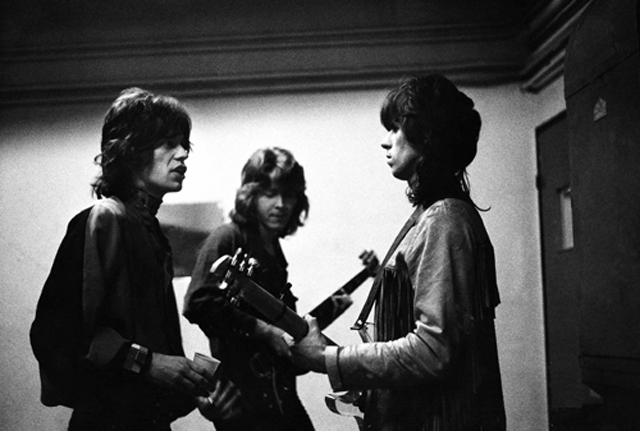 MELBOURNE: SPOTLIGHT ON THE ROLLING STONES

Curated with the assistance of the award-winning Monck, the exhibition offers a series of twenty-six images of the iconic “Stones,” including Mick Jagger and Keith Richards at a pivotal time in the bands career, their 1970 European tour. The collection includes intimate back stage and on-tour shots showing the inner world of one of the important rock groups in history.

The Backstage Pass exhibition will run from 16 April – 28 April, with an opening night being held Friday 20 April, at the Colour Factory Gallery, Fitzroy.

POP ART LUMINARY AT THE QUT

The work of Roy Lichtenstein, one of the key figures of the 1960’s New York Pop Art movement, is instantly recognizable. Along with his contemporaries such as Jasper Johns and Andy Warhol, Lichtenstein’s work helped shape the future landscape of art. This year Brisbane, along with some key regional galleries will be awarded the opportunity to view some of Lichtenstein’s influential works, with the touring exhibition Roy Lichtenstein: Pop Remix.

Lichtenstein’s artworks typify the Pop Art aesthetic, borrowing images and styles from popular culture to re-imagine them as art. Pop Remix is a collection of over one-hundred of the the artists works, spanning his lengthy career. The collection of works are drawn from the National Gallery of Australia’s Kenneth Tyler Print collection, and will also be accompanied by rare and recently restored film footage and photography.

The Roy Lichtenstein: Pop Remix exhibition is currently touring the country, and will be on display at the Mornington Peninsula Regional Gallery, Mornington from 19 April – 11 June, QUT Art Museum, Brisbane from 29 June – 26 August, before arriving at the Araluen Arts Centre, Alice Springs on the 16 November. 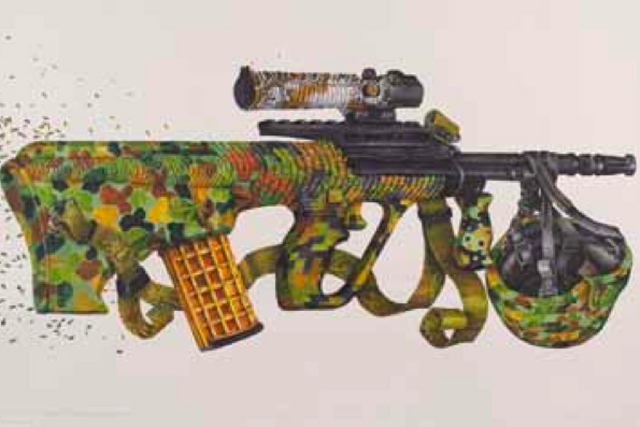 BRISBANE: THE ART OF PEACE

Opening this week at the Queensland University of Technology gallery is a new exhibition featuring the work of two of the countries leading contemporary artists, presenting art that focuses on Australia’s peacekeeping operations.

Artists Jon Cattapan and eX de Medici offer a new perspective on the efforts of the Australian Defense Force in peacekeeping and the experiences or wartime. The Perspectives exhibition begins during a time when war is foremost in the thoughts of Australians, with Anzac Day approaching next week.

Commissioned by the Australian War Memorial, Cattapan travelled to Timor-Leste, in 2008 at a time when the region was on the verge of civil war. Cattapans’ paintings are inspired by images taken there, through night vision goggles.

Known for her detailed water-colour depictions of guns and weaponry, eX de Medici has worked in a range of artistic media, including drawing, installation, performance and is also a tattooist. eX de Medici has focused on civil unrest in the Solomon Islands, and Australia’s involvement there.

This adults-only “panto” is a parody the popular and disturbingly dark 2010 ballet film Black Swan. Ashley portrays Natalie Portly, a ballet dancer suffering from body dysmorphia. Featuring songs and outrageous costumes, the return performance of the show has also been revamped with fresh new jokes. Joined in this camp comedy romp by Genevieve Lemon (Billy Elliot the Musical) and televisions Brandan Moar, Fat Swan promises to be a strange but hilarious satire.

Fat Swan will run for fourteen performances at the Reginald Theatre, Seymour Centre from the 16 May 2012.