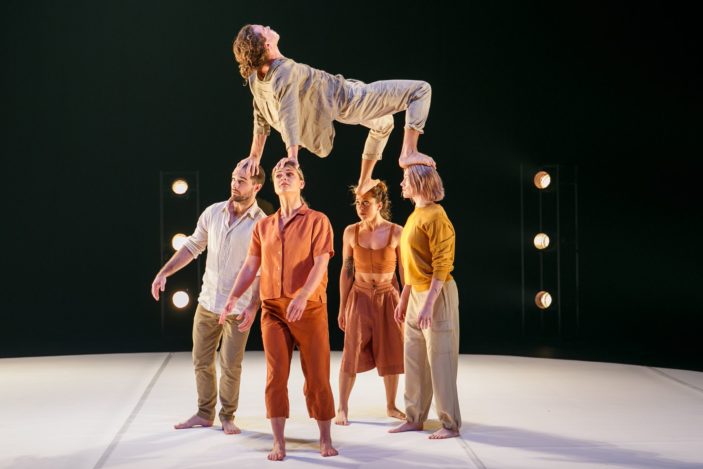 Globally acclaimed Queensland contemporary circus group Circa have delivered a sequel to their ground breaking 2017 show Humans. Humans 2.0 is a ‘love letter to humanity’, exploring trust, vulnerability and the extremes of human ability.

Those extremes are of evident immediately, as the cast of 10 begin with outrageous feats of acrobatics. At times it can feel as though they almost throwing each other around like the proverbial ragdoll, however a closer interrogation of performance shows a precision-tuned example of extreme fitness and heightened teamwork. With the majority of the show featuring the full cast, the team is absolutely in synch as they achieve movements that seem impossible even as they’re happening.

Direction from Circa’s Creative Director Yaron Lifschitz and lighting from Paul Jackson showcases a slick, edgy and contemporary show. Ori Lichtik’s music is bright, though a little repetitive in parts yet fully supporting the work.

While the mix of acrobatics and performance theatre can be abstract in some ways, a number of families enjoyed the show, giving a truly human experience at a time when live performance is so bereft of it.

Humans 2.0 is part of Sydney Festival until 21st January. Tickets and more details are available HERE.