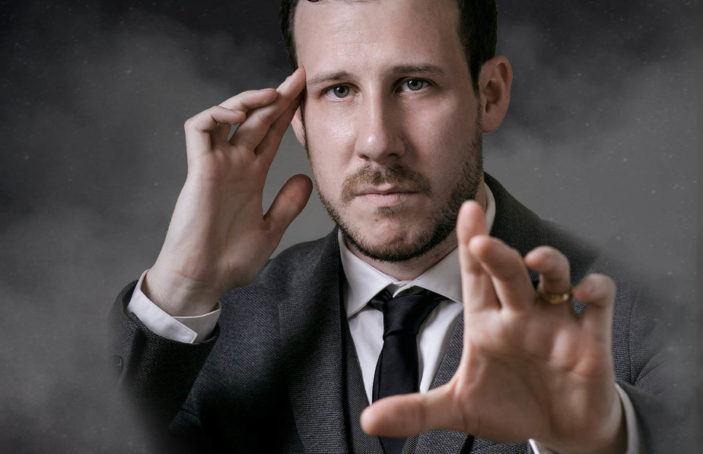 As the audience assembles in the foyer of the Mill, yellow envelopes are handed out. The instructions are to write a question for the Fake-Fake Psychic and seal them within the envelope. We place them in a glass bowl near the stage as we enter.

A statement is projected up on the screen. Words are jumbled up, but we can still read them. This is probably the first exercise in mind control and sleight of hand. Tom Weil comes on stage and explains to us that he is not a psychic, not a fake psychic, but a fake-fake psychic. By this he means that the tricks and illusions he presents are simply that and should be understood as that.

Having said that, the illusions are quite incredible. A paper envelope stays in full sight for the majority of the show, which contains a specific fact from later in the performance. Several props that have been in plain sight all along contain similarly discrete  facts from the show.

Audience participation is key to this routine. Weil has an easy and charming demeanour, and coaxes volunteers to on stage to help with ease. Here are genuine moments of incredulity from these participants and the audience in general. However, this magician does not reveal too many of his tricks, hinting perhaps at how a few choice words can influence a person’s decisions.

Weil explains how his love of magic came from his grandmother and there was a heartfelt moment when an audience member received a “message” from a dearly departed loved one. While upfront about the fact that this was an illusion, Weil went on to explain that less scrupulous operators used these same techniques too dupe those consumed with grief.

Confessions of a fake-fake psychic is a feel-good and entertaining show. We may be no wiser to how some of the illusions were constructed, we are more aware that fake-psychics exist and how to spot them.

The reviewer attended the performance on March 11th.