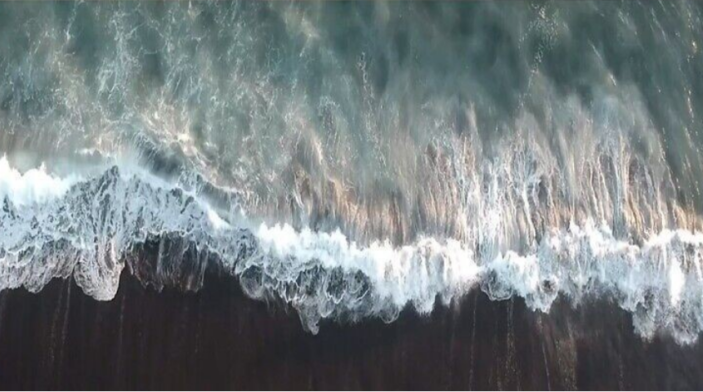 This reviewer found themselves in the confines of the Pacific Islander room at the Adelaide Museum, where composer Jamie Perera presented an inspired performance with climate change symphony Anthropocene in C Major.

The Anthropocene era is considered the period of time when human activities have had a significant impact on the Earth’s geology and ecosystems. Of the earth’s 4.6-billion-year life span, this era is approximately 12,000 years long.

Using data such as the increase in use of fossil fuel and the loss of major biodiversity as the score and orchestral instruments such as tuba, violin and double bass, the world’s lost voices are brought to life.

The score begins in a simple, almost monotonous way, representing the stable conditions of the time. Imagery is projected behind Perera – simple sky, simple waves. There is a random deconstruction of false binaries, as significant changes in the earth’s astrobiology are represented by flashes of sound and imagery.

We are led through the period of domestication of animals, extensive farming, (invention of the wheel), major volcanic eruptions right up to the present era, including the industrial revolution. For this period, violinist Julian Ferraretto joins the stage, and interprets the increases in GDP as a violin piece.

Meanwhile the imagery becomes more and more complex, thin strips of flashes of history interspersed with images of nature becoming smaller and smaller. Chemical production, war, the atom bomb – are all presented side by side with images of money and the economy.

The piece certainly paints a grim picture of the exponential direction that we are headed and gives cause to reflect of humankind’s role within our ancient planet. A sobering and important view of humankind’s role in shaping the world’s biodiversity.

Electric Dreams’ Anthropocene in C Major has finished its Adelaide Fringe run, but the collective still have plenty going on this festival season! For more info, head to the Adelaide Fringe website HERE.