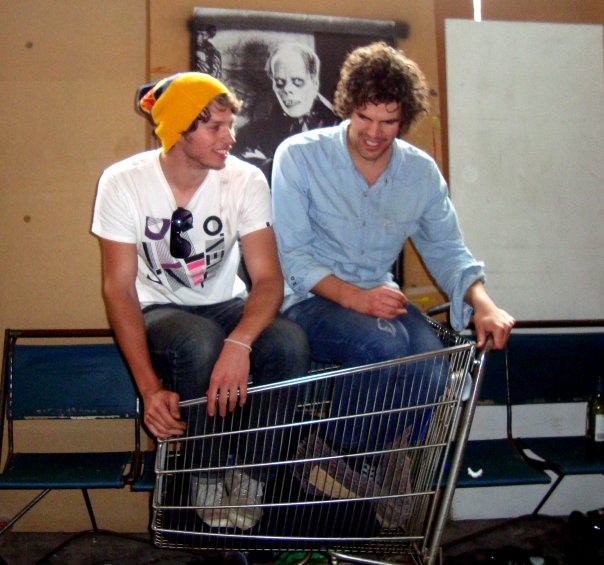 Melbourne two piece Ross de Chene Hurricanes have been slowly rising into public consciousness locally… and now they’re set to show the rest of the country what they’re all about thanks to the Major Label release of their track “Sugar, Honey”. We get to know the band, this track and find out what they think about the Melbourne scene…

Tell us about yourselves… how did you form?

We are two friends who rent together in the northern ‘burbs of Melbourne. Our friendship is based around a mutual love of Tony Modra and his radical speckies. Our band was formed by jamming in the garage when we had nothing else to do.

How would you describe your music?

Technically, our music could be described as lo-fi garage rock/pop or something like that. Whatever. Boring. We prefer to describe our music as ‘TUBULAR’: An adjective that came from the sea and has evolved into an everyday term. Parties, concerts, etc. can be totally “Tubular”. Its use is endangered by the word “awesome” (California Games Instruction Manual, Sega, 1987).

Do you find any limitations only being a two piece, or is it more a “it’s not what you’ve got, or how much of it, but it’s how you use it…” sort of deal?

We like to think that the positives of being a two-piece significantly outweigh the negatives. Think about it, less people to organize, less gear to carry around, and the rider is split between only two people. Win/win.

Tell us about the track “Sugar, Honey” – what about it do you think attracted Major Label to it?

‘Sugar, Honey’ was among the first bunch of songs we recorded and was our first ‘single’ I suppose, not that we ever did anything with it until recently when Major Label decided to release it, which we’re pretty stoked about. It has a dirty, raw summer feel, which I guess is what Major Label liked about it.

What do you hope people who listen to it take away from it?

This song, like all of our songs, is just a bit of fun. There are no subliminal messages or anything in this one so you don’t have to worry about that.

How did the Major Label opportunity come knocking? Was there any hesitation when it did?

We received an email about a month ago to say that our song had been short listed as an August release. We never provided General Pants Co with a demo or anything as we are generally not very proactive when it comes to that kind of thing, so I actually don’t know how they came across our music. But there was no hesitation when we were offered the deal, we are fans of previous releases through the label and the whole concept is a pretty cool idea.

Have any new opportunities come out of the Major Label deal? If not, anything you’d like to see happen?

It’s still very new for us, the release was only last week I think, but we have been busy with interviews and bios for different pieces, and Major Label are definitely spreading the word about our music which is sweet.

What fellow Melbourne bands have you been following in recent years?

Our good buds The White Goods make some rad music, but still don’t get girls. I don’t really understand that. We like to throw parties with them every few months, and beat them at sporting challenges. We also dig Super Wild Horses who are a two-piece as well, and we’ve more recently discovered Chook Race, Bad Aches and The Bonniwells who should also be checked out.

You can listen to the single below, and purchase the track through Major Label HERE.